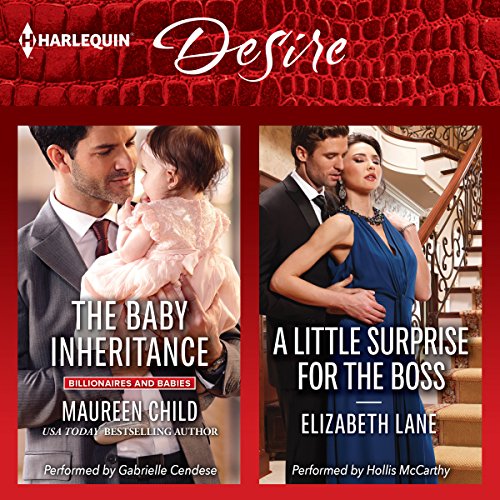 The Baby Inheritance & A Little Surprise for the Boss

Is a family in the future for this wealthy bachelor? From USA Today best-selling author Maureen Child!

Divorce attorney to the stars Reed Hudson knows there's no such thing as happily ever after. But the redheaded stunner who walks into his office with an infant in her arms will put him to the test.

Lilah Strong just brought a baby girl to a man who splits up families for a living. Now he wants Lilah to stay on as temporary nanny to his niece. Reed Hudson's plush hotel suite is a world away from Lilah's rustic mountain home. Will their undeniable attraction end in heartbreak - or forever?

A Little Surprise for the Boss

A secret crush on the boss leads to keeping a little secret from the boss!

When Terri Hammond's innocent errand lands her in her boss' bed, she knows the jig is up! But despite a red-hot encounter, resort guru Buck Morgan wants to maintain the status quo. He can't be this turned on by his deceased best friend's sister - not after he promised to look after her. But his beautiful secretary isn't playing nice. She's taunting and teasing him to distraction! Terri has managed his business for the past 10 years. Certainly he can trust her with his heart…if they can both forgive each other for the secrets they've been keeping.

Worth a listen to at least once. Kind of a lot more drama than there should of been in my way of thinking. Then again its a book, without drama there wouldn't be a story. But the two books don't really go together but its an interesting listen all the same.

The narrator is fine, but the Surprise for the Boss is a pretty awful story. For starters, the guy’s name is Buck. BUCK. I can’t picture him as anything other than an older guy with a 70’s porn stache. That’s just a pet peeve, though. My real concerns lie with 1) Buck is a gross, unpleasant man who is an awful, neglectful father whose answer instead of attention is to throw money at his kid. He’s also so immature. After their sexual encounter, his idea of dealing with it is to pretend he doesn’t remember it happened. Not exactly a good character reference.

2) Terri is a rapist. Yes, I said it. She comes across buck who has taken multiple migraine medications until he passes out. When she comes to check on him, he doesn’t recognize her and is clearly under the influence. She “can’t resist” him and climbs on. What is the difference between that and someone sleeping with a girl who is drunk or who has been slipped rohypnol? He even thinks it was a dream when he wakes up until he finds an earring. I was so disgusted by her behavior that I couldn’t care about her.

I didn’t listen to the second story. I hope it wasn’t as unpleasant as the first. I can forgive and ignore writing that is boring or has other errors, but when characters are written that disgust me, it’s hard to not be annoyed.

These are some Good books. The ending was Good, also. On the first book the narrator was ok, but I think it could have been better. But the second book it was ok.