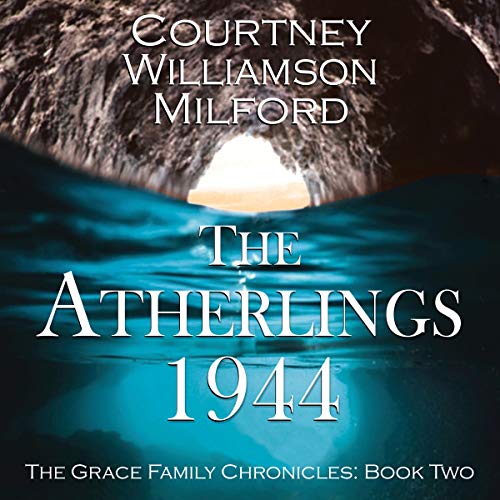 The action continues at Gracestone following the tumultuous ending of Graced 1943. Two Grace family members are in the hospital, and Amandia, the Grace family matriarch, reveals that she indirectly caused the catastrophe that sent them there. Out in Los Alamos, Humboldt, Annelisa’s astrophysicist husband, learns that the wife of Oleg, the Soviet engineer he brought onto the project, is a spy. This reflects well on neither man, and is further complicated when she begs Humboldt for help getting her partly Jewish daughter, who no one knew existed, out of Budapest, where she has reason to believe the girl is in imminent danger.

Meanwhile, Henri and Cy discover that there are uninvited guests from two different places on the family’s secret private island, Cinq Terras. This requires their immediate attention, and the help of Arthur, the family’s specialist when it comes to matters involving the sea, to rectify. Carlissa and Niko start high school, and the Jessup family arrives at Gracestone from Three Sails, Humboldt’s family ranch in California, where they had been hiding to avoid being shipped to internment camps for Americans of Japanese heritage.

Henri, the Grace family patriarch and a Midasian Multiplyer, backs Joe Jessup in a construction business, which goes well. What goes poorly is Joe’s widowed sister-in-law’s brazen and ill-advised choice to become entangled with one of the married Graced men, who forgets who she is as soon as he remembers his own identity. Also turning up are the ghost of a Grace family friend’s wife, who was murdered in Leningrad; Essie the nanny’s niece, Jessie Rae, who is an Incapacitator like Cy; and, Jessie’s violently spurned ex-love who happens to be the father of the child she is carrying.

There is a trip to Europe, which goes swimmingly, until the characters are forced to swim, literally. The ending is a cliffhanger that leads into the third book, The Train of Thought. Anyone who has not heard the first book in The Grace Family Chronicles will be able to pick up the story threads; thus, while it is a good idea to read the books in order, it is also fine to read The Atherlings 1944 without having read Graced 1943.

I'll start by saying, I started this series with this book, so don't have the benefit of what happened in book 1 to link me to this book's story. I felt a bit lost (like I was missing something) for a good portion of the story. I was able to piece together what was going on eventually and no longer feel a little lost, but I had to work at it a bit. That's not necessarily a bad thing, just my personal observation. The story is interesting, but kind of slow. The characters were interesting, if a bit too close to Marvel. It was very clearly influenced by the original Captain America movie in it's feel, and even some names that were familiar (if not a direct relation). Were they intended as Easter Eggs? I'm not really sure, but it was enough that my first thought was, "I hope no one from Disney/Marvel listen/read this..." Anyway, the narrator is pretty darn good and is really what got me all the way through this book.

I jumped in with Book 2, and obviously missed a lot of story from Book 1. I had no problem catching up with the giant cast of characters. But I had many issues with this book.
The good stuff: Great concepts, great WWII period writing (with a few anachronisms – see below), great job balancing the nearly overwhelming cast of characters. The book is well written.
The not-so-good stuff: Not much happens, and when it does it happens “off camera.” – boats exploding, rape scene, all the most exciting stuff is told after the event. Run-ins with Nazis? Sure, but they escape with no incident. No close calls, no tense dramatic scene. Russian spies at Los Alamos? Yep, but handled easily, no muss or fuss. Even the bizarre scene of the Russian spy, a hammer and a racoon happens off screen. We learn about it later.
It’s like a family drama set during WWII where they just happen to have powers and some of them are immortal. The problem? Their powers are rarely used. They mostly sit around and talk in rooms, about this or that. Great concepts and character, little plot.
It also hints at strange period things. The Aquaman-like character is named Arthur. On purpose? Some characters make a joke of it late in the book, but odd choice. Steve Rogers is mentioned briefly. Accident? One Character is named Romnal (sp?) which made me think of Rommel, the desert fox every single time. Confusing for a history buff.
There were some anachronisms as well. It’s 1944 but someone uses term “win-win” which was coined in 1963. The author may be trying to set up the idea that these rich, powerful people are “before their time” – for me it was jarring each time. Also words like “duh,” (yes Duh has an old etymology, but were folks saying it in 1944? “Flying under the radar” (Were they saying that only a few years after it was invented?) A few of these may not be anachronisms, technically. But they bothered me enough to write them down.
The voice artist is SPECTACULAR! I must say bravo for handling such a large cast with many accents. (One note: The ghost voice thing was not great. You may want to try a different technique for that idea next time. For me, it made me cringe that entire scene.)
I was given a free review copy of this book and have voluntarily left this honest review.

What a delightful group of characters!

This story was a joy to listen to. Such weird folks. And while not human, they pass for humans. At times this story was very humorous and the rest of the time, it was fantastic in it's genre, which was genre (WAY out there!) I whole heartedly recommend this book. And now for the obligatory: "I was given this free review copy audio book at my request and have voluntarily left this review."