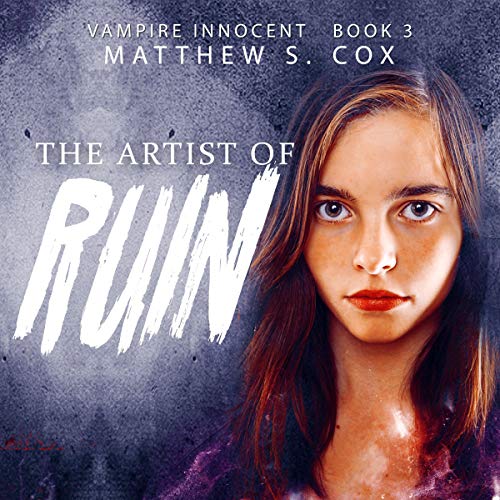 The Artist of Ruin

By: Matthew S. Cox
Narrated by: Lillie Ricciardi
Try for $0.00

Sarah Wright knows she’s in for a rough week when a ghost asking for help is the least frightening thing with which she has to deal.

A month after waking up as a vampire, unlife is feeling pretty sweet. Her mood swings are easing off, she’s got a decent boyfriend, and best of all, the parents let her slide on being lazy. They understand it’s a little awkward to keep a job when daylight can kill her.

Oh, and the whole magical powers thing is pretty cool, too.

After two weeks of quiet, her new normal blooms into a chaotic mess. Ashley’s awful luck with romance hits dangerously close to home. A simple favor for Aurélie ends with a possessed antique doll loose in the house, and worse, one random act of kindness gives Sarah something she’s never had before - a nemesis who wants to do more than kill her.

She wants to utterly ruin her.

What listeners say about The Artist of Ruin

This is a great read if you fantasize about LARPing feminist tropes.

The overall stories were marred by the clear author's hatred of men while using he text as her soap box. I enjoyed listening to the narrator. The next book in this series isn't so overtly against towards men so I have hopes for book 5.

The Artist of Ruin is the third book in this series featuring newly turned vampire Sarah Wright. As you get farther along in the series, I think it becomes more important to read these books in order as so much of the world building, relationship dynamics and plot build on foundations established in previous books. This third book finds Sarah about one month into her new life as a vampire, and she is still living with her family but finally in a relationship with a new and much more decent guy (not a high standard when the last one tried to kill her!). Sarah is finally getting the vampire gig down pat, and she is learning to use her powers and strengths more reliably. Unfortunately, with these improved skills comes increased risks, but she is definitely up to the challenge. Luckily, the author combines the new adventure and action with plenty of comedic interactions with the mundane human world of her family and friends, and I can't wait to see where the author takes Sarah next in her continued undead adventures.

Lillie Ricciardi narrates all the books in the series, and I really appreciate that continuity as I move from book to book, especially since she is so talented. She has a light, bubbly voice that perfectly matches Sarah's upbeat outlook on life, and she adds plenty of excitement and emotion to an already incredibly entertaining story.

Sarah comes into her own.

First off I would like to say that the Narrator Lillie did an excellent job. This story surrounds Sarah helping an unexpected apparition that won't leave her alone. This has unintended consequences that follows not only her but many she loves. Thankfully Sarah makes a wonderful network of friends which ends up being a bulwark necessary to besting a nemesis hellbent on destroying everything dear to her just for being a helpful person/vampire. She also helps a friend retrieve a doll with a surprising past and has an odd attachment to her family. Well it's not so odd after Sarah finds out why. I am surprised by how fearless Sarah is in this story considering she is an innocent and such a newbie to the world of vampirism. She still has so much to learn. However, love can make us stronger than we realize and that is the case for Sarah. This was a wonderfully crafted storyline and Matthew, as always, did a wonderful job. I look forward to the next book in the series. I know it will be a delight like this and the previous.

This was my first book in the series even though it was technically #3. In spite of being unfamiliar with the series it flowed well and did a decent job standing alone. I went back and bought the #2