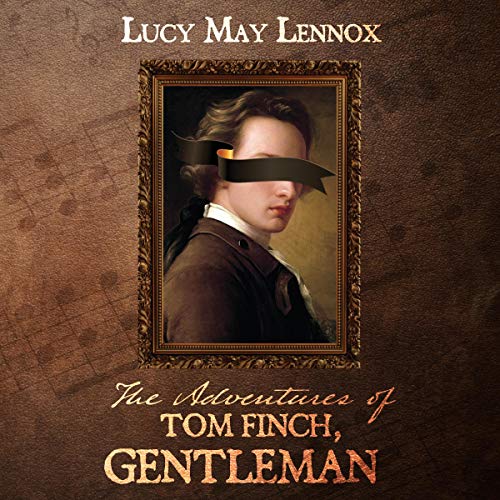 The Adventures of Tom Finch, Gentleman

London, 1735. Covent Garden offers a world of pleasures and diversions, even for a blind man. Tom Finch approaches life with boundless good cheer and resilience, whether he’s pursuing a musical career or pursuing women. And as for his blindness, to him it’s merely an inconvenience.

What listeners say about The Adventures of Tom Finch, Gentleman

I was totally delighted by this book. I didn't expect to enjoy it so much, but I was pleasantly surprised. The characters had the unique charm that characterized the period, proper men and prudish women, until the doors were closed at least. The life of a blind musician, born on the wrong side of the blanket is shared with us. His joy in life is contagious and everyone around him is affected. Tom's adventures never stop, and he even manages to get into a duel as his many friends cheer him on. Between the great characters and the great narration, you'll be sad when the story is over, I know I was. I was given this free review copy audiobook at my request, and have voluntarily left this review.

Very little rivals the sheer listening pleasure of a well-produced audiobook, and The Adventures of Tom Finch, Gentleman, by Lucy May Lennox surpassed all my expectations. It's not often that I'll kick off a review with a pile of gushing, but in this case, it's entirely warranted.

Narrated by Duke DeFoix, Duchess DeFoix, Olivia Featherton, and Earl Tyrone, this audiobook is a delight from start to finish – each character shining against a well-researched, well-written historical narrative.

At its heart, this tale follows the doings of one Tom Finch, a composer, conductor and musician operating out of London in the mid-1700s. Tall, handsome and a shameless flirt, Tom is also blind – yet he navigates the theatres and streets of London in fine style. The natural son of a nobleman, Tom doesn't have many prospects – he can't serve in the navy or the army due to his disability, but he's carved a good life for himself conducting operas and writing broadsides with the assistance of his friend. And in fact, his disability perhaps stands him in good stead, for his ability to listen far surpasses that of the sighted.

Tom may be a libertine, but his heart belongs to the free-spirited, gamine Sal, a sometimes bawd and highway robber. But the singer Tess also creeps into his heart, and their friendship has its ups and downs. In fact, by the time I was done with the story, I felt as if the enormous support cast had become the kind of friends I'd expect to meet on the street – and it's a rare thing indeed for a story to grip me like this.

A word also on Lennox's musical knowledge – this novel is incredibly well researched in terms of giving the technical aspects of late-baroque music a ring of authenticity. And while the plot is a rambling journey, it all nonetheless hangs together in a glorious intermeshing of narratives. Each chapter is episodic and almost self-contained, yet contributes beautifully to the overall development of the story – and let me tell you there are not that many authors I've encountered who can pull this off so well.

I also particularly enjoyed the fluidity of characters' sexuality in a way that felt effortless – many of the characters are bisexual, and no big deal is made of this, which I appreciated. It felt natural and appropriate for the mood of the particular scenes.

I was almost heartbroken by the time I reached the end of this tale and can heartily recommend this well-tuned romp through London, with visits to the English countryside, a troubled crossing of the English Channel and also a flirtation with Paris.

I loved this book. It was not my usual genre but I was pleasantly surprised. This was well written and the story was interesting. It caught me right away and kept me engaged. The narration was good but not great. I am not fond of the multiple narrator style which seems to be very popular.

The Unlikely Adventures of a Blind Music Master

Tom is the b*stard son of an English nobleman, educated and given the best chances possible at the insistence of his aunt Lady Grey, but spared the fate of military service like his other half brothers due to his blindness. Free to pursue whatever career he wished, Tom chose the arts, and we meet him as the music master at a local opera house and a notorious "lady's man." Somehow he manages to stray around the British Isles and the continent, find love, lose it, fall victim to robbery, and always land back on his feet.

I really liked Tom and Lady Grey in particular, in terms of characters in this book. Tom is optimistic, resourceful, and quite clever. Lady Grey is stubborn, righteous, and endlessly generous and caring. Beyond these two, however, I found it difficult to keep track of who was who. All other female characters, especially while the story is in England, just seem to blend together. Sometimes they love Tom, sometimes they love each other, sometimes they love nobody, but they all feel defined by who they love and how Tom feels about them. The other men are easier to keep track of (Tom's Lord father, Tom's maternal uncle, Tom's friend Gem, the owners/managers of the opera houses,) perhaps because they don't overlap as much as the ladies.

I thoroughly enjoyed the peek into 18th-century society and arts culture that this book affords us, and the humorously honest way medicine is presented was a treat for this history buff. I love how skeptical Tom is of some of the more misguided ideas of doctors in this book, such as bloodletting. Disability in the 18th century is certainly not a topic I've studied, but the way people react to Tom doesn't seem too far off to me. On one hand, sometimes it feels like characters are a little too accepting and unbothered about the man's blindness (especially for a society that still believes in bloodletting), but on the other hand it's generally known that he's the b*stard son of a nobleman and that probably affords him a little more social charity and acceptance.

It becomes a running joke in this book that nobody understands how a blind man manages to live in a house that he keeps in such disarray and I get the feeling that we the readers are supposed to just laugh along with the characters and move on, but this is something I haven't been able to accept and leave alone. I have never met an untidy blind person, let alone one who lives independently, so I don't buy it at all. It's one thing that Tom's house is cluttered, but he's constantly telling his guests they can move something and put it wherever. This implies he doesn't know where the clutter is in his own home because others are moving it around, and the story seems to agree, as some characters note that he adopts a shuffling gait while moving about his house. I just don't believe any fiercely independent blind person, regardless of time or social standing, would live in a home that's in a perpetual state of chaos.

In terms of narrative performance, I enjoyed the ensemble cast. Having a variety of voices to listen for certainly helped keep this huge cast in check (I imagine I might have been completely lost in regards to all the minor characters if I had read this one with my own eyes) and I appreciate the fact that the voices were distinctly male or female and offered an appropriate variety of accents. I was a little annoyed that French words used by English speakers weren't pronounced correctly, though. French was the language of the nobility in England for most of the nation's history, and like here in Canada, even the Commonwealth countries beyond the UK's borders still pronounce French-origin words the French way. "Valet" is one such word that came up frequently. My only other complaint about the vocal performance is children's' voices. All child voices were excessively pitched up and given the same accent, regardless of who they were or which accent would have been appropriate. I'm not sure if different voice actors voiced child characters and just all did so in the same way or if one of the actresses did all of the child parts, but they all sounded like exactly the same character.

Overall this was a fun historical fiction with a plot unlike any I've ever encountered before, and I enjoyed it. I will certainly keep my eye out for this author in the future. Thank you to the author and Audiobookworm Promotions for complimentary access to the audiobook in exchange for this honest review.