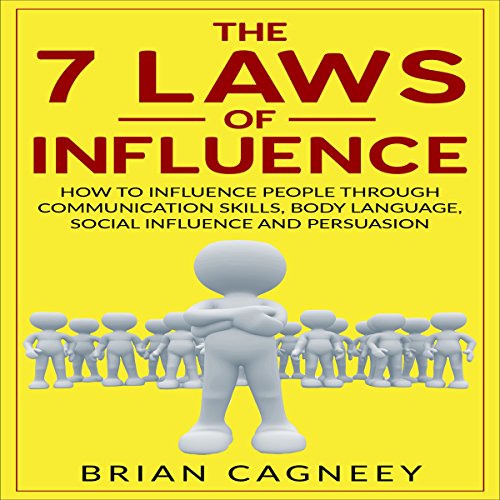 The 7 Laws of Influence

By: Brian Cagneey
Narrated by: Toby Sheets
Try for $0.00

Change people's minds and actions - Be an influencer!

If so, this is the book for you!

In Brian Cagneey's The 7 Laws of Influence: How to Influence People through Communication Skills, Body Language, Social Influence and Persuasion, you'll learn the true meaning of influence. Genuine influence persuasion involves earning the trust of those around you and building an eager audience of followers.

In The 7 Laws of Influence, Brian Cagneey explains:

Gain the power of social influence, help others embrace your goals, and create a better tomorrow!

What listeners say about The 7 Laws of Influence

Lots of useful tips for being an effective communicator and leader. Wish I had read this 10 years ago. Great guide!

Good, general advice. It's common sense, but how often do we actually use it? Understanding and doing are completely different, and it's when you do actually put the principles to use that you see the results. It's unbelievable how these simple, commonsensical principles are NOT practiced by people. And it's amazing how actually using them in your daily life produces results you have never expected before.

The only complaint I have for this excellent book is that its later part didn't have enough concrete examples to illustrate how to use the principles. Other than that, all the anecdotes were fascinating, principles well-explained and well-organized, and every bit of information was useful to the highest degree.

A candid, easy to listen book, with many behavioral situations that teach you how to be a better human. Overall: excellent!

Definitely worth buying! The material is immediately usable. Such basic principles that really, any human should follow, but somehow we all forget. Great book!

An awesome book! Having made many of the mistakes myself, burned many bridges, and waged countless losing battles, these advice of wisdom made quite an impression on me. Highly recommended.

This is a very good book to get if you're socially awkward, introverted, lacking relationship skills and/or unable to make friends or get along with people in general. It's also useful if you are interested in social skills in general, and think you would benefit from learning more about human interaction.

It's definitely a book that can change your life to the better if you read or listen to it and apply the principles learned within. I can say I was very impressed by the case scenarios presented and I will keep a short version of everything I learned from it somewhere close, so that I can apply these when it will be the case.

If you feel like you are in at least one of the above mentioned categories, you should get it.

This is one of those few books that applies to any profession, age, gender, etc. With numerous anecdotes, Brian creates a memorable framework of how to have better EQ.

I especially like how the tips come from a genuine place of listening and understanding other human beings; the suggestions are not simply shortcuts or tricks to produce behaviors you want.

People are complicated, and until that remains so, this book is highly useful to anyone.

This is an excellent read for the communication and getting a control over the own behavior based on the principles given in this book and build the relations.

This book explains each and every principle with different examples and short real stories which help to relate these principles in the real world.

Wow! What a great book. I highly recommend listening to this book! One of my favorites on the subject.