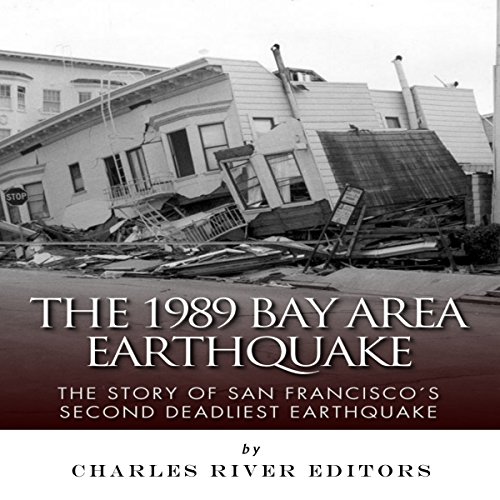 By: Charles River Editors
Narrated by: Kat Marlowe
Try for $0.00

"Well folks, that's the greatest open in the history of television, bar none!" (Al Michaels after the ABC feed was restored)

On October 17, 1989, millions of Americans tuning in to watch the Oakland Athletics face the San Francisco Giants in the World Series watched the cameras suddenly start to shake violently for several seconds. The national broadcast had just caught an earthquake registering a 6.9 on the Richter scale striking the Bay Area. By the time the earthquake and the resulting fires were over and dealt with, over 60 people were dead, making it San Francisco's deadliest earthquake since the 1906 earthquake and fire.

The damage and devastation across the Bay Area was widespread despite the precautions and changes the region had made in the wake of the 1906 calamity. After that disaster San Francisco began the process of reinforcing buildings to help structures brace for earthquakes. But even in the 1980s, they were still more concerned about potential fires resulting from an earthquake.

What listeners say about The 1989 Bay Area Earthquake: The Story of San Francisco's Second Deadliest Earthquake

Would you consider the audio edition of The 1989 Bay Area Earthquake: The Story of San Francisco's Second Deadliest Earthquake to be better than the print version?

I didn't read the print version, but I thoroughly enjoyed the audio.

The shared stories and hearing of all the civilians and public servants that worked tirelessly to help.

Inflections in the stories being told and, in some cases, emotion.

Rising From the Rubble

Loved the book and narrator.

Kat did a great job narrating this book. I learned a lot about the Bay Area earthquake . She was able to bring it to life for me . Great job Kat

What made the experience of listening to The 1989 Bay Area Earthquake: The Story of San Francisco's Second Deadliest Earthquake the most enjoyable?

I enjoyed listening to all the "rememberances" of that earthquake. The variety of first hand accounts was fasinating.

What was one of the most memorable moments of The 1989 Bay Area Earthquake: The Story of San Francisco's Second Deadliest Earthquake?

The account of the man trying to save the woman fatally injured in the bridge collapse.

All the devistation that occured with this second deadliest earthquake, it couldn't have been an easy story to narrate. I like that Kat had a soothing, calm voice for the reading.

Because of the nature of the book, and that it's all from real-life events, it would be almost impossible to not have an extreme reaction.

I thoroughly enjoyed the narrator and how she told the story. Kat Marlowe always holds my attention. She speaks clearly and with emotion.

This was a very horrible account of what Mother Nature can do. Anytime where there are casualties saddens me very much.

This was the second documentary I have listened and found it just as intriguing and informative as The 1906 Earthquake Kat Marlowe also narrated. I learned a lot reading this book since I didn't know much about the subject.