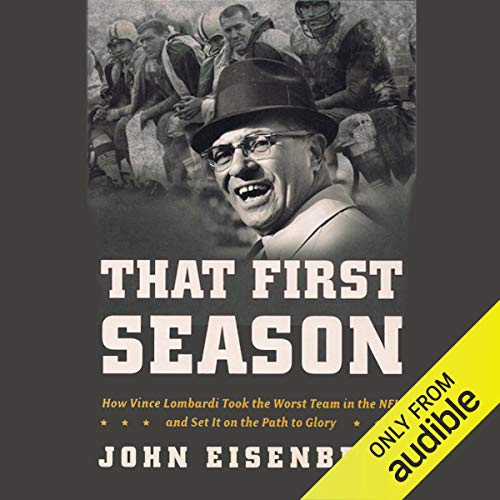 By: John Eisenberg
Narrated by: Pat Young
Try for $0.00

John Eisenberg's That First Season is the seldom-studied prequel to a phenomenal football career for Vince Lombardi and the Packers, drawing on exhaustive new research and interviews to tell an incredible ensemble tale of a team, a town, and their leader.

The once-vaunted Green Bay Packers were a laughingstock by the late 1950s. They hadn't fielded a winning team in more than a decade and were close to losing their franchise to another city. They were in desperate need of a savior, and he arrived in a wood-paneled station wagon in the dead of winter from New York City. In a single year, Vince Lombardi - the grizzled coach who took no bull - transformed a team of underachievers into winners and resurrected a city known for its passion for sport.

That First Season chronicles Vince Lombardi's remarkable first year as head coach with the franchise he would reinvent and etch forever in football history. In a single year, as the grizzled coach who took no bull, he would transform a team of underachievers into winners and reignite a city known for its passion for its sport.

Eisenberg pushes away the mist that surrounds the Lombardi legend to bring listeners the real story of how the seeds of a football dynasty were sown. He also brings alive an incredible ensemble tale of a team, a town, and their leader.

What listeners say about That First Season

Narrator should refund his fee

THE worst narration I’ve heard in over 100 audiobooks!! Nearly EVERY name, whether person or place was mispronounced. I’m surprised he was able to say Green Bay properly. One would think that someone be paid to read a NON-FICTION book would learn the pronunciation of names and places, particularly many PRO FOOTBALL HALL OF FAMERS, before recording the performance. Absolutely AWFUL!

What made the experience of listening to That First Season the most enjoyable?

The story was wonderful, great book.

The history of a great man and the way he changed a team. It was great to hear the story of how Vince Lombardi changed the culture of the Packers with his management style. The joys and pains of a team in transition. Left me wanting more!

Great voice, poor narration. Obviously does not know anything about football, many names mispronounced, basic football terms mispronounced. Reading style really took away the pleasure of the story.

Yes, and it left me wanting more.

Definately worth the listen, IN SPITE of the narration.

Narrator Needs to Learn to How to Pronounce Names

Growing up in Appleton, WI I know all of the towns and names that Pat mentions in the book. Only difference is I know how to say them. First time I hear him pronounce a key players in Packer History - Ray Nitschke's name as "Knit- Ski" when it's pronounced "Nitch key" I was turned off. Onieda was pronounced "O-knee-da" when it's O-nigh-da or the town of Allouez as "Al -O-wez" instead of "Al-o-way" People who are fans and know of the area will be turned off by the lack of preparation the narrator did in figuring out how to say these names.

Loved the content and the story when it was all said and done.

What was one of the most memorable moments of That First Season?

About how some of the veteran players came into training camp early and thought they would be able to play golf just like the year prior to Lombardi getting there. Vince saw them and said if you were staying at camp, you were going to practice!! Set the tone!

Who would you have cast as narrator instead of Pat Young?

Anyone who would have spent the time to learn how to pronounce the names in the story correctly.

Great story on how one man's goal, fearless determination to win, succeed ,No excuses, get to work, straight up down to basics

How he brought out the best in many players, Great story on how one man's goal, fearless determination to win, succeed ,No excuses, get to work, straight up down to basics

I feel like if someone is going to narrate a book about Vince Lombardi, they should know how to pronounce Wisconsin cities. Oh well, still a great book!

This is the best by far Fottball book ever. So well written and interesting. Highly recommend.

a great story I bought a great coach very inspiring what an amazing story!!
definitely entertaining in a great listen to.

Great story, but have issues with the reading

This is an unbelievable story of how Vince Lombardi turned around the Green Bay Packers in one season. Truly a great story. However, it was kind of hard to listen to at times because the names of many players and cities were just butchered. You would think they would ask somebody how to pronounce them instead of just guessing. Some were so far off I wasn't even sure who they were talking about, and I've lived in Green Bay my whole life.

The early stories of the Green Bay Packers

A wonderful look at what it takes to succeed from a time gone by. Stories most people have never heard because what we focus on and remember are the championships. Not what it took to get there. Highly recommended!

Outstanding story from Lombardi Packers lore fans. Let's you in on the realities of what Coach Lombardi and the team went through, physically, mentally, and emotionally, not just the superman champion stuff.