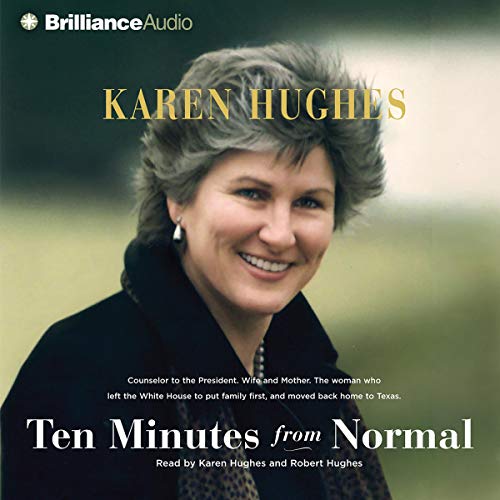 "The rule of thumb in any White House is that nobody is indispensable except the president," said The New York Times, "but Karen Hughes has come as close to that description as any recent presidential aide."

Karen Hughes has worked beside President George W. Bush since, as she says, "the motorcade was only one car and he was sometimes the one driving it." As counselor to the president, she brought the working mom's perspective to the White House, often asking of President Bush's policies, "What does this mean for the average person?"

Yet the move from Texas to Washington was hard on her family, and in a controversial, headline-making decision that reverberated across America, she summoned the courage to say, "Mr. President, I love you, but I need to move my family home to Texas." There, where Hughes continues to advise the president, the kitchen wall calendar marks the State of the Union message side by side with her son's orthodontist appointments.

Listening to Ten Minutes from Normal - the title comes from the campaign trail - one is instantly absorbed in what it's like to be a "normal" person who goes to work at the White House as a part of the president's inner circle.

Told in Karen Hughes's disarmingly down-to-earth, warm, often funny, and frank voice, the book is a remarkable blend of an ordinary woman's life, with all its compromises and everyday decisions, and a keenly insightful look at American politics and America's forty-third president.

This is a book for the legions of women and men everywhere who are seeking new inspiration for how to reorder their priorities and achieve balance in their lives. Most important, in a post-9/11 world, Hughes redefines the very notion of what is "normal" as something special and precious, never to be taken for granted in America again.