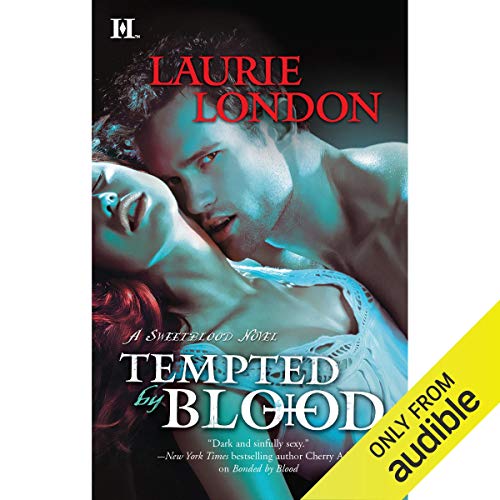 By: Laurie London
Narrated by: Eve Bianco
Try for $0.00

Deep within the forests of the Pacific Northwest, the battle for supremacy rages on between two Vampire coalitions: Guardian enforcers sworn to protect humanity, and Darkbloods, rogues who kill like their ancient ancestors….

He might be known for his effortless charm, but Guardian Jackson Foss is hiding a terrible secret. For months, he has battled the emergence of his dark nature—deadly urges that threaten to consume him. And those cravings only intensify when he meets Arianna Wells, the human he's been assigned to protect. Smart and perceptive, Arianna doesn't seem like a dangerous temptress. Yet she awakens in Jackson an unstoppable need that, if left unchecked, will brand him a traitor… a crime punishable by death.

But soon their bond may be Arianna's only hope. For stalking her in the shadows is a merciless enemy—one who will stop at nothing to claim her completely.

What listeners say about Tempted by Blood

MY FAVORITE SWEETBLOOD SO FAR

Firstly, I love this Sweetblood Series and long may it continue and I think this has been my favorite because Jackson seemed such a lost and tortured soul as he fears he is becoming the very thing that he is hunting. But thankfully he meets Arianna and things start to look up.

Lots of great characters, many from past books, as they continue their fight against the Darkbloods plans to capture the Sweetbloods. However, this focuses more on Jackson and Arianna's love story as their relationship develops, grows and heats up - but there are still threats, kidnapping, fights and a an ahhhh of an ending.

Worth a credit? I'm going to judge this book not compare it to the undeniably top of it's class BDB - so it's a YES absolutely, a good and worthy series to sink your teeth into, and I'm off to listen to Santiago's story now which is the next in the series and is book 4.

Much better than book one

1st book was fair, 2nd good, this one better. progressive improvement. You need to read first two to know the characters. I like that the original couples are involved in this storyline. There are a few dumb decisions that irritated me, like duh who would have thought her house would be under surveillance, gee let's just go grab some clothes. Also the sex doesn't sizzle . I can't write it myself so I hate to be critical, but I know when I've read other books I was left breathing hard. But I like the characters, like the plot enough to keep reading and to recommend the series.

WOW I LOVE THE SWEETBLOOD SERIES

What made the experience of listening to Tempted by Blood the most enjoyable?

What was one of the most memorable moments of Tempted by Blood?

Which character – as performed by Eve Bianco – was your favorite?

Both Jackson and Arianna


Tempted By Blood is Guardian Jackson Floss's story. Jackson increased cravings for energy and blood from humans has him believing he is Reverting. Reverting into a Dark Blood like there ancient ancestors for a Guardian means a horrible execution. While on his routing checks to insure the Sweetbloods in the Guardian Data Base is safe from DB, Jackson runs into his charge Krystal a 15 year old about to be attacked by DB. Jackson doesn't realize at first that Krystal's cousin Arianna Wells is videoing him for her blog Paranormalish. He blog code name is Icy Shadows. Jackson is forced to take there phones and mind swipe there memories. What Jackson doesn't know is her phone automatically downloads to her cloud acct. Days later after something jars Arianna's memory she posts the video and pictures of what she saw that night. Her cousin Krystal is a Sweetblood, but she has an uncanny knack for resisting mind swipes. Jackson has been order to kill her if he can't get his second attempt to swipe her memories.

This begins a fast paced suspenseful and sensual sexy romance between Jackson and Arianna. There are villain aplenty, twist and turns that the readers will probably figure out. I enjoyed the revisit with all the lead characters of the other books in the series. I also loved that the world of Guardians, Dark Bloods and Sweetblood continue to grow and expand. There world is always enlarging as well as the PR capabilities of the Guardian. I Highly Recommend Tempted by Blood bk4 and the entire SweetBlood series by Laurie London.

I'm constantly looking for a good book to read and sometimes I get lucky and this SweetBlood Series was good. Audible should have a page where as a member can go to and recommend good books that they've read. Make it simple, life is too complicated. The narrator Eve Bianco has a sexy male voice for Fang. It would be nice to have a male and female read the audible books together, like in the FaeFever Series.

What the HECK this is really book 3

This may have been the forth book released but in the timeline of this series this is book 3.The story isn't as strong as the first two books, but it is okay. I think if our bad boy Jackson had more going on with him personally or more demons at his back the story would have had more of an edge. I don't like the narrator and at times she sucks the life out of the story. This series is not at the level of other vampire series, but it an okay listen. If you are looking for a BDB type of series this is not the series. For that try the Laura Adrian's breed series or new Laura Wright Eternal series.