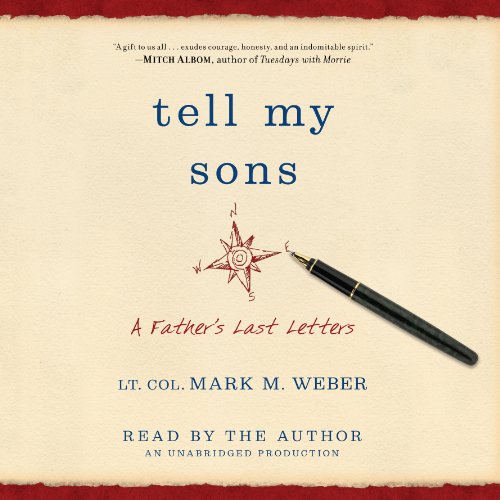 At the pinnacle of a soaring career in the U.S. Army, Lt. Col. Mark M. Weber was tapped to serve in a high-profile job within the Afghan Parliament as a military advisor. Weeks later, a routine physical revealed stage IV intestinal cancer in the 38-year-old father of three. Over the next two years he would fight a desperate battle he wasn’t trained for, with his wife and boys as his reluctant but willing fighting force.

When Weber realized that he was not going to survive this final tour of combat, he began to write a letter to his boys, so that as they grew up without him, they would know what his life-and-death story had taught him - about courage and fear, challenge and comfort, words and actions, pride and humility, seriousness and humor, and viewing life as a never-ending search for new ideas and inspiration.

This book is that letter. And it’s not just for his sons. It’s for everyone who can use the best advice a dying hero has to offer.

Weber’s stories illustrate that in the end you become what you are through the causes to which you attach yourself - and that you’ve made your own along the way. Through his example, he teaches how to live an ordinary life in an extraordinary way.

"Tell My Sons is a deeply moving, personal account of a soldier’s journey into an ultimate frontier. As I read Mark Weber’s book, I was astonished by its honesty, courage, and discipline. This book offers one of the most profound and detailed descriptions of the strange world of cancer and should be essential reading for all of us who seek to understand that topsy-turvy terrain." (Siddhartha Mukherjee, Pulitzer Prize-winning author of The Emperor of All Maladies)

"Tell My Sons is one of the most profound and inspirational stories I have ever read. It may have been written for Mark’s children, but it may as well be a treatise for all of us about honest parenting and leadership with character in love, family, faith, and politics. For a man who is facing profound health issues, Mark is doing a remarkable job showing us all how to live with courage and integrity." (Walter F. Mondale, former vice president of the United States)

"A poignant illustration of what being a hero is all about.... Heroes exemplify invincible courage, character, and perseverance in times of insurmountable odds. Mark embodies these attributes. Tell My Sons will empower the reader with profound lessons of living life with hope and determination." (John Elway, Pro Football Hall of Fame quarterback)

What listeners say about Tell My Sons

A Testament To Family, God and Country

Unimaginable, that is the only word that I can use to describe this man's final journey. Not the fear of where he is going or what he is going to go through but what he is leaving behind when he discovers that he is dying and he has to leave the wife that is not only the woman that he adores but is truly his partner. She is unique. A special category of wife. A United States Army wife, cut from a different cloth. Then there are his boys. Their hearts are sweet and gentle but he has brought them up to be strong as if wearing Kevlar. There is his family rooted in all that is good in this great country of ours. He still has his mission and the thought of leaving this sweet earth and the career that he loves hurts worse than the many cancers the are rapidly eating away the life that is fighting to continue within him.

Through it all Lt. Col. Mark Weber pulls on the notes within his journals that he kept with such discipline over the years together with his memory and those yet to be made each and every day while he still has a little time left so that he can write letters to his children. Final letters filled with learning, sharing lessons of his wisdom and experience but most of all reaching out from those pages letting those little boys know throughout their lives into manhood that they are loved as their Father, who has a deep belief in god will be looking down on them from Heaven.

it is the greatest gift that he could give to them. The gift of love.

A superb book. Why this is not a Top 10 on the NY Time Best Seller List I have no idea at all!

My husband read this book and said I should read it. It was an amazing book. I laughed and I cried.

Will Make You Laugh and Cry At The Same Time!

This is one of the best audiobooks I have listened to so far. Being narrated by Lt.Col.Mark Weber made the story even more compelling! The stories that he tells are just amazing and what he went through with his cancer I cannot even begain to imagine. The book left me wanting to hear more about Lt. Col. Mark Weber's life and family. This book is a most read for everyone!

Gritty, Honest, Knock Down, Drag Out to LIVE

This is a battle story, in many ways not unlike the wars of the past, fought on many fronts .. . except that this one is a strategic battle with DEATH. LTC Mark Weber, ready to deploy in support of General Petraeus' campaign in Afghanistan, went for a physical, which revealed that he had cancer. At age 38, the young husband and father of three boys, began a different path than he had imagined for himself . . . or for his family. Remaining on active duty with the Minnesota National Guard, Mark readies himself by preparing his own "battle plan" for his fight with death, just like any good soldier. My husband (a retired Sergeant Major with 22 years service in the army) and I listened to this audio book on a recent road trip. Our own family has lived all over the place in our 22 years of army life, and just like all military families, our experiences were very different than the Weber family's. Yet there are many commonalities. LTC Weber's account of army life is refreshing and openly honest. His wife hated the army . . . and I just had to laugh. I think I would have hated being an officer's wife, too . . . but I LOVED being the wife of an NCO. I loved caring for the younger soldiers and their wives and families . . . but I had no use for the pomp and circumstance . . . the BS. I enjoyed hearing about the early years of Mark's career, when he was still "wet behind the ears" . . . and I was absolutely over the moon to hear that he never stopped trying to "buck the system" and expose the double standards when they were evident . . . Tell My Sons is a courageous book . . . It's not JUST about fighting cancer, trying to beat death . . . it's about being honest . . . and let me say, I'm not in agreement with everything that LTC Weber believed . . . but dag gone it, I know one thing, it IS what he believed . . . Honestly sharing his childhood, his teen years and struggles with his wife . . . those stories will be jewels in the lives of his three boys . . . rudders on the ships that will guide them in ways they won't realize until they have lived lives of their own . . . and finally, LTC Weber's story is a legacy for generations of soldiers, who fight untold battles. LTC Weber was a Christian. His faith was private. But he knew where he was going . . . he just wasn't quite ready to go there . . . without the fight. He wasn't into platitudes. He was into "bottom lines". And he told his own story, on his own terms. RIP, LTC Weber