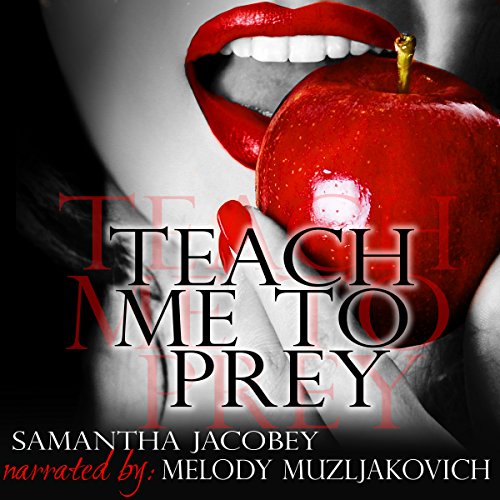 Teach Me to Prey

By: Samantha Jacobey
Narrated by: Melody Muzljakovich
Try for $0.00

In this standalone thriller, Jason Truitt and his friends have gotten their way for years. Deceit, sex, and foul play aren't normally covered in the curriculum, but they're doing whatever it takes to get under Becky Stewart's skin. When one of the boys turns up dead, it's a race against time to save the others. A stunning story that will get your heart racing and leave you breathless by the end.

What listeners say about Teach Me to Prey

it was a good book, but not what I expected. i expected some kind of revenge story based on the title. I thought the writing was good but the story itself could have used some work.
the narration was great except there was lots of loud yelling. I found myself turning the volume down and up, down and up. other than that the narration was fabulous. I thought she did a great job.

Teach me to prey...catchy title

I will try not to give any spoilers - but I didn't think the book lived up to its title or cover. I thought the best part of the audio was the narration. For a first-time narrator, I thought Melody Muzljakovich did a very good job. Her basic narration was very good, though I thought at times her character voices were a bit over the top. My biggest problem was the story itself - I didn't find much that seemed realistic. Many of the characters said and did things that were just not believable. I wanted to like the story - I thought it had promise. But there were too many questions left unanswered. I received the audiobook free in exchange for an honest review.

Love the narrator - not crazy about the book

The narrator was AWESOME! I'm not crazy about the writing though, it was a little downplayed to me and the story freaked me out a bit with the love interest.


This was an ok story, and really puts into perspective what teachers go through. However, none of the characters had any redeeming qualities, and everyone acted spoiled and bratty. Also, I don't know if I would consider this story a "romance", a suspense, "yes" but "romance" no.

Some spoilers/teasers:
Teach me to Prey is a suspenseful story regarding some High school students who turn to bullying their teacher instead of other students. When they push her to far, she decides to get even; however, her attempt ends up back firing on her. As she deals with aftermath of her short lived revenge, she manages to make it to the end of the year for graduation with no other issues. But after graduation, Becky, makes more bad decisions, and agrees to go on a date with one of her ex 18 year old student, but little does she know this is all a game.

Melody Muzljakovich's did a FABULOUS job narrating this story! You could easily identify and feel the different emotions the characters were experiencing, as the narrator performed the wide range of emotions like anger, sadness, despair, hurt etc. The performance was stunning, and the female characters were excellent! I hope to hear more from this narrator. Kudos!

What A Great Story.

Let me start out by saying this book was the first book I've listened to by this author and narrator. An I can honestly say I really liked it. The way this author writes a story will grab and hold you captivated till the end. This story was one that had me on the edge of my seat trying to figure out what was going to happen. Its full of mystery and intrigue and to be honest usually aren't my type of reads. But after listening to this audiobook I can honestly say this author is one I would read again. I really liked how the narrator portrayed the story my only complaint was it felt like I was having to adjust the volume up and down because it would get really loud when the character got upset. Other then that I would recommend this book to anyone over 18 that likes mystery with a touch of romance.

I received a copy of this audiobook for my honest review which i have supplied above.

Teach me to prey

'Teach Me To Prey'. I found myself not wanting to put this aside, .. I just wanted to know what was going on. I have found a new respect for the teaching profession. Our leading lady, Becky (Rebecca) Stewart, finds herself in the middle of a murder investigation when two of her former students are found murdered and a third missing,,,and the suspense begin

What does Melody Muzljakovich bring to the story that you wouldn’t experience if you just read the book?

She did great with the narration

Teach me to Prey is a great book. I loved he audio book it brings the characters to life. The narrator is amazing and adds so much personality to the story.

The story starts with three boys trying to get Rebecca to quit. This is her first year teaching seniors and she is determined to not be pushed around. When her complaints to her supervisor about these troublesome kids isn't handled, she decides to take matters into her own hands. Her idea is to scare them into behaving. But when the boys start turning up dead can she prove her innocence?

I loved this book. It is a great coming of age book. I loved seeing the growth of the characters. I couldn't put it down. I loved that I couldn't figure out all of the twists and turns in this story. It kept me on the edge of my seat until the end. If you like thrillers you will love Teach me to Prey.

I loved the story and the narrator..I was on the edge until the end cause I wanted to know what was happening and who was responsible.
great story

Would you listen to Teach Me to Prey again? Why?

I wouldn't rule it out - the book is intentionally mysterious, so listening to it a second time to go, "Oh, so that's what that meant!" could be fun. Listening to Melody Muzljakovich's engaging character portrayals is also worth hearing again.

The story itself is enjoyable and, as mentioned in the review headline, thought-provoking at parts. Our protagonist, Rebecca, finds herself upriver without a paddle much of the story as everything that should go right winds up going wrong. Characters make mistakes, and consequences are reaped, leading readers to wonder just how far one could or should go to exact justice or - dare we say it - revenge. That said, the ending can feel a bit hard to swallow at parts; "good" actions are taken that would raise a few eyebrows in real life, the unveiling of the killer feels a little anticlimactic, and, in this man's opinion, a few of the story's moral quandaries feel a bit unresolved by the end (i.e., careless actions generate initial consequences, but we never really get a sense for how that will affect the characters down the road). More of an introduction (or even just implication) of the killer's identity may have come across better.

Have you listened to any of Melody Muzljakovich’s other performances before? How does this one compare?

As a voice actor and audiobook narrator myself, I have crossed paths and worked with Melody Muzljakovich in prior projects, though this is the first of her audiobooks I've listened to. She's been a talented, engaging voice artist in these projects, and she's no less talented in this audiobook. The characters stand out in this reading.

While I wouldn't describe the story in its entirety as particularly "moving," one of the most thought-provoking, well-written moments comes early in Rebecca's pregnancy (which I figure is not a spoiler, as it's in the book's description) as she struggles with a certain hard decision. Not all stories bother to show both sides of the dilemma so objectively or humanly, and I feel this moment was written well.

A good read (or listen, as it were) for anyone with an interest in romance stories, particularly those with an element of suspense or mystery. Certain elements can feel a little "much," if you catch my meaning, but the story remains enjoyable nonetheless. Melody does a great job with the characters.

Teach Me to Prey was a great read by Samantha Jacobey. Jason and his friends have always gotten everything that they've wanted. They will do anything to get under their teacher Becky's skin. One of the boys is found dead and now they must save the other boys. Unfortunately for Becky, the cops think she may have something to do with it. I enjoyed Jason and Becky's story and can't wait to read more by Samantha Jacobey.