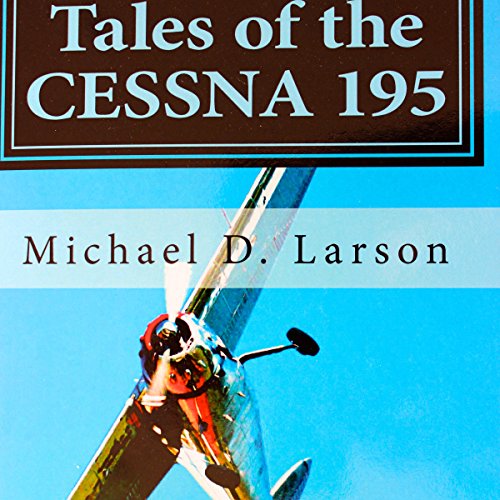 By: Michael D. Larson
Narrated by: Roland Sickenberger
Try for $0.00

Mike Larson's fascination with the Cessna airplane began at age 12 with a test flight at the Cessna Aircraft Company factory. Mike became a professional pilot, starting his 50 year career in aviation with a pilot's license, an old plane and a dream. From shuttling skydivers in a Twin Beech 18 to flying the Douglas DC-8, follow Mike's adventure-filled journey from plane to plane and around the world. When Mike and his wife, Charmian, decided to purchase a plane of their own, they choose the Cessna 195. They were quite unprepared for the onslaught of new experiences and friends this plane would bring them.

What listeners say about Tales of the Cessna 195

The 195 was a supporting character at best in this book. Most of the stories the author mentions have nothing to do with the Cessna 195. They’re great stories of his career and experiences, but why title the book this when only about 25% of the book is actually about the Cessna 195?

Michael is a great storyteller, and I could see myself sitting under his wind at Oshkosh and listening to stories into the wee hours of the night.
He did get one thing right. It is about the people most of the time. The people in the tight groups keeping the aircraft alive.

He has a remarkable aviation journey.
I was however expecting to learn a little more about he 195. What its predecessors, successors, how many were built, who operated them. How many models etc. If you a looking for that go elsewhere.

It's a great listen. The parachute schools, the party's and scraping a living were a good listen.

I enjoyed this book from start to finish. There were a lot of interesting stories throughout. It made me feel like I was just sitting around listening to old friends talk about planes.

Probably could have had a different title.

I did enjoy this book and don’t want to take away from the author but... this book could have been titled “My Entire Aviation Career and a Little About the Cessna 195.” The part the tittle does apply to is informative and interesting. If you want to read about an interesting aviation career this is it.

Oldie but a goodie

I enjoy this audiobook quite a lot. I guess it is the airplane stories and aviation history of the author.

Thank you Mr. Larson for writing and publishing your personal history.

Great stories, great narration. As an aviation junkie, I found this to be an entertaining and educational bunch of episodes in a series about a lifetime of aviation adventures. Loved it. We need more like this.

If you're a pilot and love flying - you'll love this book!

Great stories - from small airplanes to big airplanes. If you're a pilot or just love airplanes you'll enjoy them all.

This is a great book not only about Cessna 195s, but flying in general. Reads particularly well on audible!

I like the jump plane stories. All of them are great though!

This was a great book and wonderful listen. There are plenty of lessons learned, imparted through stories of how the author learned those lessons. This makes it a fairly easy listen for a non-fiction book. You can feel the author’s love for both aviation, and the particular airplane the book it titled for.

The narrator did a good job. Certain types of books (first person experience stories in this case) require the right tone, and feeling to be fully appreciated. This is one of those and the narrator succeeds.

Listening to it was like sitting down with a pilot-friend and hearing flying stories.

This was a phenomenal listen! It is the true to life tale of private pilot and ATC rated Captain Michael Larson and his life in General and Commercial aviation. It is very personal and filled with his love of the subject. By the end I felt like I knew the author and his wife personally. I also learned about a plane I didn't even know existed, the Radial powered Cessna 195.This book is not for everybody and is the only reason that it got 4 stars overall. I realize it is a niche listener who will find this completely engaging and I am one of those people as I was a student pilot and an aviation buff so this book was aimed squarely at me. It is a great book as a stand-alone autobiography, but should completely engross ANY aviation enthusiast.

The narrator Roland Sickenberger also did a tremendous job. He has a warm, friendly and sonorous voice and sounded like your best mentor speaking to you. I really believed that it was the author speaking to me.