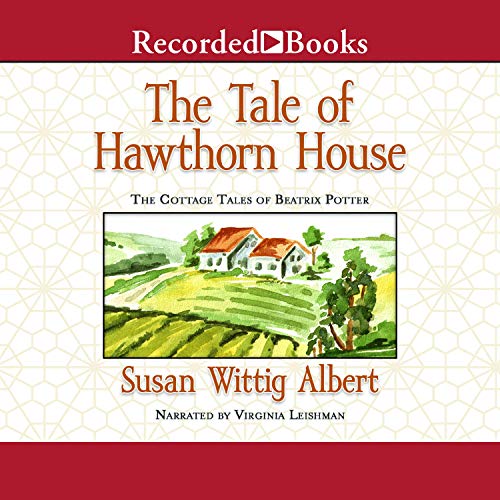 By: Susan Wittig Albert
Narrated by: Virginia Leishman
Try for $0.00

What listeners say about Tale of Hawthorn House

A nice continuing tale in this series by Susan Wittig Albert. The narration is good.

A gentle tale that unfolds like one of Beatrice Potter's children's tales and, without too much suspension of disbelief, as believable.

I loved this book! A thoroughly enjoyable listen. the narrator is totally engaging. highly recommend.

This is book four in the fictional episodes in the life of Beatrix Potter and her farm in the Lake Country. I don’t think this book is as good as the earlier books.

The book is well written. This story has the to do with a sixteen-year-old having a baby out of wedlock in rural Edwardian England. I found it cute that Albert had the animals gossiping as much as the humans. I found the information about various types of trees interesting. This book makes a good get-away-from-it-all story.

The book is ten hours and one minute. Virginia Leishman does an excellent job narrating the story. Leishman is a British actress. I enjoyed listening to her accent.

What did you love best about Tale of Hawthorn House?

Although my age indicates that I'm undeniably an adult, I have never given up my belief in fairies. I believe Fairies exist because I still need them. Ms Albert provides believable eveidence of their existence and how they might interact with the human world. Ms Albert also gives poignent portryal of the role of children and how the adults who should care for and about them often fail to look out for their best insterests. Compare the treatment of Miss Potter by her own self-absorbed parents, the red-haired Irish orphan taken in by the vereinarian and his family (a British Anne of Green Gables?), and baby Flora. In this writer's mind these three individuals are unvalued children who comprise a major theme in the book. Ms. Albert skillfully resolves each character's plight at a different pace; Flora's by the end of the book, Miss Potter's and the orphan's by stages by the end of the series.

What truly delights me about this series is how Ms Albert succeeds in including Miss Potters characters and making them as substantive as the human characters. Ms. Leischman's superb narration is crucial to this success.

I have two favorite scenes. The human scene is when a squirrel (or was it a dwelf?) wakes up Miss Potter from her nap in time to learn some crucial evidence. The animal scene is when Jemima Puddleduck's eggs hatch.

I like to listen to Audible as I'm working around the house. I love it when a book lasts from laundry time to dinner.

Where does Tale of Hawthorn House rank among all the audiobooks you???ve listened to so far?

This series is my all time favorite, right up there with Bloody Jack!!!

Which character ??? as performed by Virginia Leishman ??? was your favorite?

She covers all the parts very well.

The continued life and times of Beatrice Potter.

Susan has done a fantastic job with this series about Beatrice Potter.