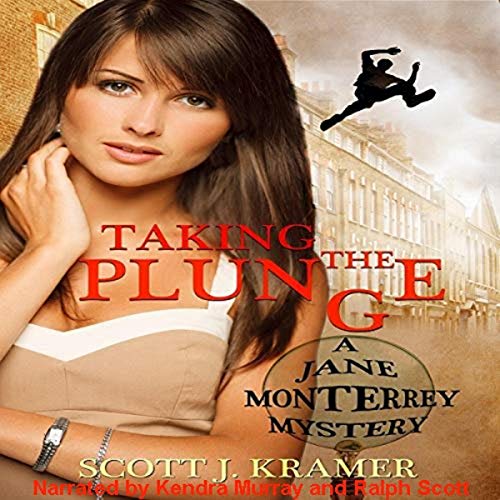 By: Scott Kramer
Narrated by: Kendra Murray,Ralph Scott
Try for $0.00

Jane CK Monterrey is an inexperienced Cincinnati private eye whose world is flipped when local millionaire George Halberran plunges to his death outside her office window. Hired by George’s eccentric mother, Vucktoria, to investigate her son’s death, Jane has no idea how messy things can get.

With the help of sexy Officer Brad Hyatt, her nosy mother, and all sorts of quirky new friends - from little numismatics to a monkey that dances to Michael Jackson’s Thriller - Jane stumbles along trying to find out if George really was murdered without getting hurt herself.

What listeners say about Taking the Plunge

Taking the Plunge by Scott Kramer is a quirky listen that combines humor and mystery. I found the narrators fitting for the book. They added to my enjoyment and brought the characters to life. The storyline is original and reminiscent of a spoof on a detective story. I loved the twists and turns. I requested this review copy audiobook and have voluntarily written this review, I will listen to more books by this author and narrator.

I think the best definition of this one is a spoof of the detective novel. It's definitely great fun and doesn't take much seriously. I won the audiobook in a giveaway, and it was the very best thing to listen to while scrubbing my cast iron frying pans (a grim piece of work since I'd burned the contents of one of them pretty badly). The story was well laid out and had lots of plot twists and red herrings in addition to the general humorousness. As for the narrators: Kendra Murray has perky to the extreme (bet she would have made short work of my pans), and Ralph Scott matched her fun for fun. It's a really good light hearted cozy!

I enjoyed the twists and turns that held my attention and the tongue-in-cheek humor that put a smile on my face.
I loved the censoring of swear words!

Kendra Murray brought the characters to life and Ralph Scott brought campy humor to his characters.

In Taking the Plunge , Jane Monterrey, known as CK to her friends, works for herself as a private detective. A billionaire comes to her office to hire her as he says someone is after him. Jane does not learn anymore as he falls to his death shortly afterwards outside her office window. Vuckoria, the billionaires mother, who lives in an assisted living/retirement home, then hires Jane to find out the truth about her son’s death. Was it suicide or murder? There are many twists and turns in this story with its very quirky characters. I did enjoy the male and female narrators, but perhaps it could have been done with a little less exaggeration. I was given this free review copy audio book at my request and have voluntarily left this review.

this book was given to me at my request for review

loved this book. couldn't stop listening to it. suspense and good detective work. both narrators were wonderful

My review on Taking the Plunge is mixed on both the story and that narration. Jane Monterrey works for herself as a private detective, and she seems to solve most of her cases by happenstance rather than skill. The book starts with a billionaire coming to her office to hire her, but he runs off before telling her anything and falls to his death moments later. Jane is consequently hired by the victim's mother to find out who pushed her son to his death. The mystery aspect of this story is very good; I never would have guessed how many twists and turns the case would take, and I thoroughly enjoyed trying to figure out what in the world was happening. I am a big fan of cozy and humorous mysteries, but I found this one to be over the top to the point of being ridiculous. It felt like the author tried too hard and ended up making the story ludicrous rather than comedic. Think Vaudeville Melodrama, and you have the idea. It might be to some readers' tastes, but it detracted from the good old fashioned detective story that I was otherwise enjoying.

As with the story, I struggled with my review of the narration. I thought that Kendra Murray did an overall good job with the narration, but she contributed to the overall goofiness of the story. This almost cartoon-like narration in parts might have been at the author's direction, but I once again would have enjoyed the production more if she narrated with less drama. Because the story is told first person point of view by Jane, Ralph Scott only read when men were speaking to Jane. His narration was also pretty exaggerated, leading me to think maybe this was supposed to be more like a soap opera than a traditional detective story.

Mystery that you just cant put down!

The plot was interesting if a little disorganized with multiple villains and subplots are loosely woven together.

Kramer has collected a colorful collection of quirky characters in this slapstick modern detective mystery. Kendra Murray performs the main narration and all of the female characters while Ralph Scott performs the male voices. Each gives distinctive voicing to their respective characters. This technique is a bit jarring at first, but it does aid somewhat in identifying the speaker during dialog. Unfortunately, the performance seemed to be an attempt to dramatize this audiobook, a big, huge no-no among audiobook fans. The sound effects and fake laughter are very unlikely part of the actual text in the book. This audiobook really should have been read by a single, talented narrator and all sound effects and dramatization should have been omitted.

I think the story has potential, but given the missing audio, it's hard to tell. I do think that Jane is way too bumbling to be a believable character. I'm not impressed.