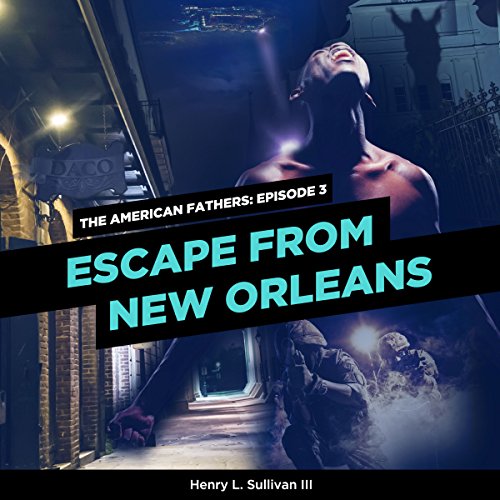 American nobility hire the assassin MCM to kill other nobility, but after his first rendezvous with a new lover, the military contractor Devin Wayne discovers he is MCM's next target. Devin knew an affair with America's first princess would not be easy, but he is determined to stay with her, even if it means risking his life.

Victor Daco is the most powerful patriarch on the board of directors running the United States of America in 2032. He also happens to be Irene's father. Devin isn't intimidated by Victor putting a contract on his head. He's one of the most skilled operatives in the business, but can he survive being hunted by the world's deadliest assassin?

What listeners say about THE AMERICAN FATHERS EPISODE 3: ESCAPE FROM NEW ORLEANS

Action, AI, and then some!

Note: While this is Book 3 in the series, it works well as a stand alone, though it is definitely enhanced by enjoying the first 2 episodes previously. However, if you do pick this up as a stand alone, you might want to check out the glossary first to pick up some of the lingo, characters, and overall atmosphere of the series. For the audiobook, this glossary starts at the 59 minutes 20 seconds mark and lasts just over 14 minutes.

Devin Wayne is a hunted man and he doesn’t know it yet. He’s just waking up to another day in the near-future New Orleans that is complete with AI, coffee, and annoying yet loyal friends. Mike has unexpectedly stopped by Devin’s hotel room and Devin, always on the edge, nearly took Mike for an assassin. Devin isn’t far off the mark because Mike is there to deliver some bad news: a hit has been taken out on Devin and one of the most skilled assassin’s in the trade as been hired.

This addition to the series is quite different from Books 1 and 2. While Swept Away and Dinner Invitation were more cerebral and full of political intrigue, this book is all action. It starts with Devin pouncing on the unexpected Mike to their attempt to escape New Orleans to the cat and mouse game Devin and MCM play throughout the rest of the book. Also, there’s no sex. Still, even though this book has a totally different tone, it is still pretty darn good.

There’s a decent amount of future tech built into this tale. I loved the vehicle AIs and all the stuff that can go wrong with such things. Then Devin, who is a highly skilled operative, has some tricks up his sleeve for evading MCM. Yet not to be outdone, MCM has some tracking gadgets that Devin and Mike weren’t expecting.

The action rolls in waves throughout the book so I never got battle fatigue from the story. Things start off mellow with Devin waking up and then he goes on high alert as he tackles an unexpected Mike. Things mellow out again as the two men catch up and then things peak again with the first attack from MCM. This really worked for me because I don’t need one adrenaline rush after another in my stories.

The banter between the two men was very amusing. They obviously have a long history and have built up this trusting friendship over time. Like Mike, I was hoping just a little that Devin would describe some of his intimate moments with his girlfriend Irene Daco (who we met in Book 2) but I can respect a person who doesn’t kiss and tell. I do want to know more about MCM and if this episode will be the last we see of this assassin.

While this episode of the series had a nearly all-male cast, it balances out well with the series as a whole. The female characters were definitely the stars for the first two episodes. Now we’ve seen that Sullivan can do action scenes as well as he does political intrigue and sexy relationships. All around, I’m impressed. I look forward to seeing what he does next.

I received a free copy this book.

The Narration: The quality of this series continues to be top rate. The vocal narrations are well done, each character being well cast. I especially liked Devin’s voice, being a rich manly voice. Mike was playful and impertinent and I could just picture the impish grin on the narrator’s face as he performed this character. There’s a handful of other voices throughout the story and I really liked the New Orleans accent some of these characters had. Sound effects and background music complete the experience. These are well timed and also don’t compete with the narration, which remained crisp and clear throughout.