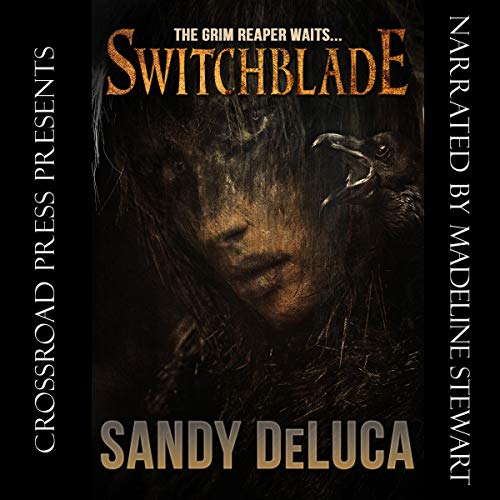 By: Sandy DeLuca
Narrated by: Madeline Stewart
Try for $0.00

Zombies, ghosts, the grim reaper, and Poe’s raven all play a part in the story of Adrienne Milano, a girl born in a trailer park to a wayward woman, a prostitute and drug addict. A woman named Vicky, who speaks enigmatic messages to her only child from behind prison walls, haunted by a long-ago meeting with a crime boss named Debra Cardenti.

Debra’s gift of a switchblade pendant to a trailer park resident proves to be a lethal killing force - and it becomes Adrienne’s legacy.

When she teams up with Debra’s son, Louie, the couple cons, steals and murders without remorse. But on a hot August afternoon all the dead return - rising from olden crypts - resurrected from deathbeds after they’ve been poisoned or shot.

Before long, zombies fill East Coast streets and highways, the ghosts speak cryptically and the grim reaper waits. Can Adrienne and Louie escape the monsters that pursue them, or will they perish within the apocalyptic landscape?

Switchblade resembles the gritty nonlinear storytelling of Pulp Fiction, combined with the classic terror of Night of the Living Dead. Quentin Tarantino, David Lynch, comic books, and graphic novels are the author’s inspiration for this work of fiction.

What listeners say about Switchblade