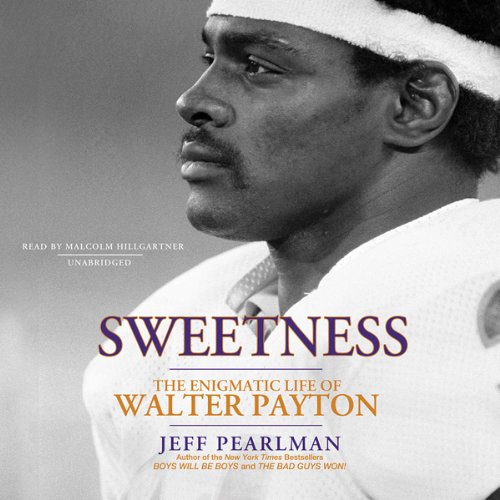 By: Jeff Pearlman
Narrated by: Malcolm Hillgartner
Try for $0.00

At five feet 10 inches tall, running back Walter Payton was not the largest player in the NFL, but he developed a larger-than-life reputation for his strength, speed, and grit. Nicknamed “Sweetness” during his college football days, he became the NFL’s all-time leader in rushing and all-purpose yards, capturing the hearts of fans in his adopted Chicago.

Drawing from interviews with more than seven hundred sources, acclaimed sportswriter Jeff Pearlman has crafted the first definitive biography of Payton. Sweetness at last brings fans a detailed, scrupulously researched, all-encompassing account of the legend’s rise to greatness. From Payton’s childhood in segregated Mississippi, where he ended a racial war by becoming the star of his integrated high school’s football team, to his college years and his thirteen-year NFL career, Sweetness brims with stories of all-American heroism and covers Payton’s life on and off the field. Set against the backdrop of the tragic illness that cut his life short at just 45 years of age, this is a stirring tribute to a singular icon and the lasting legacy he made.

"Jeff Pearlman does the work of first-rate biography in his addictively readable Sweetness. He presents Walter Payton in all of his flaws and contradictions yet leaves you in the end with a much deeper appreciation of an uncommon man." (David Maraniss, Pulitzer Prize–winning author)

What listeners say about Sweetness

Honest Accounting Of A Fascinating Life

Started listening to this book after getting a tip from A Football Life episode on Walter Payton. Thought that there had to be more to the man than the sparkly clean image put forth by the media and the family and this book does a very thorough job of giving the details of a rather complex human being without being a tabloid.
The narrator did an excellent job with the pace and the different sounding voices. It was an audiobook that was hard to turn off. It covers Walter's life from Mississippi to Illinois and pretty much everything in between. I was able to follow up some of the events of the book with YouTube clips (e.g., Walter's Hall of Fame Induction speech and his brother Eddie's eulogy at the memorial service) which brought the elements of the book to life.
I highly recommend this audiobook.

The inside story of WP and his football/life lessons.

What was one of the most memorable moments of Sweetness?

The softness of the man in spite of his womanizing and selfish behavior.

If you are a Payton fan, great book!!!

I grew up as as a Bear fan and of course a Walter Payton fan. Every kid who played football wanted to be Payton. This book is by far the most detailed of his life and career. The book closes any gap you may have had on what happened during any part of his life.

Writer seemed obsessed with airing all of Payton's dirty laundry. He focussed too much on it. Also, he says to contribute to the Mayo Clinic, but made it sound like they kinda dropped the ball, when it came to Walter and transparency about his condition. Narrator mispronounced a lot of words, dissappointing.

I met Walter once. He lived next to my mother in Arlington Heights for 8 years before he moved to his mansion. My mother baby sat for Walter &amp; Connie's kids occasionally. He was really a sweet guy, my mother loved Walter &amp; Connie &amp; the kids. The book was a bit of a downer as it detailed his many flaws, particularly infidelity. Still, I loved learning about his life story. He was a real &quot;stud&quot;. Walter died of liver cancer at age 46, probably from taking so many unregulated pain medications during and after his his playing days. Football is a beautiful sport, but tough on the body. Excellent research, really good writing.

A candid account of one of my favorite people. He is more complex than I imagined. Great narration.

I looked forward to getting back to "the book" each time I had a drive to make. It is a long book but held my interest throughout. If you are interested in the 1985 Bears this book adds a lot to the story at a deeper level about a key player.

For every minute of the book, 40 secs of bad tales

The author does a great job of digging into Walter Payton's life but focuses WAY too much on the negative aspects. For every minute of the book, 40 seconds is focused on diving into a negative of Walter (personal life, media, hidden secrets) and 20 seconds on his amazing contributions (On the field, for the kids, for his teammates, for Chicago).

Of course Walter had some skeletons in his personal life but the book focuses way too heavily on those, only to breeze over the amazing things that he has done.

The very end of the book, the author tells stories of what makes Walter special. Really wish the book had more of those stories in it versus digging up the dirt.

This was nothing more then an unnecessary cash grab. Straight smut from Pearlman. He mentions many an issue and specifically a painkiller problem without any context. As Jarrett Payton has said “there are some true things & untrue things” in this book. Completely ridiculous that Pearlman wrote this garbage years after Walter had died.

Loved it! I love learning the real story about famous people and this book does this very well. Very well researched and you will really know Walter Payton better than the average fan.