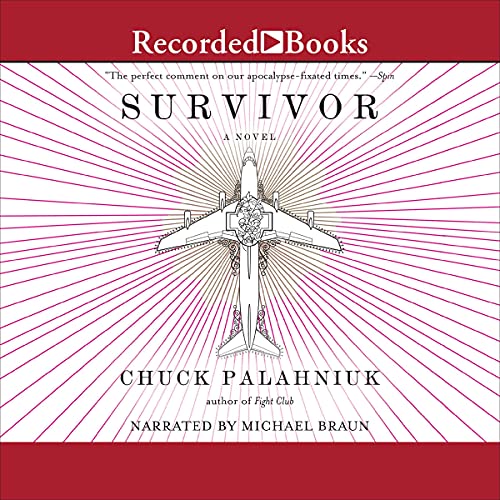 By: Chuck Palahniuk
Narrated by: Michael Braun
Try for $0.00

Tender Branson - last surviving member of the so-called "Creedish Death Cult" - is dictating his incredible life story into the flight recorder of Flight 2039, cruising on autopilot at 39,000 feet somewhere over the Pacific Ocean. He is all alone in the plane, which will shortly reach terminal velocity and crash into the vast Australian outback. Before it does, he will unfold the tale of his journey from an obedient Creedish child and humble domestic servant to an ultra-buffed, steroid- and collagen-packed media messiah, author of a best-selling autobiography, Saved from Salvation, and the even better-selling Book of Very Common Prayer (The Prayer to Delay Orgasm, The Prayer to Prevent Hair Loss, The Prayer to Silence Car Alarms). He'll even share his insight that "the only difference between suicide and martyrdom is press coverage", and deny responsibility for the Tender Branson Sensitive Materials Landfill - a 20,000-acre repository for the nation's outdated pornography. Among other matters both bizarre and trenchant.

Not since Kurt Vonnegut's Mother Night and Jerzy Kosinski's Being There has there been as black and telling a satire on the wages of fame and the bedrock lunacy of the modern world. Survivor is Chuck Palahniuk at his deadpan peak, and it marks him as a blazing talent for the new millennium.

What listeners say about Survivor