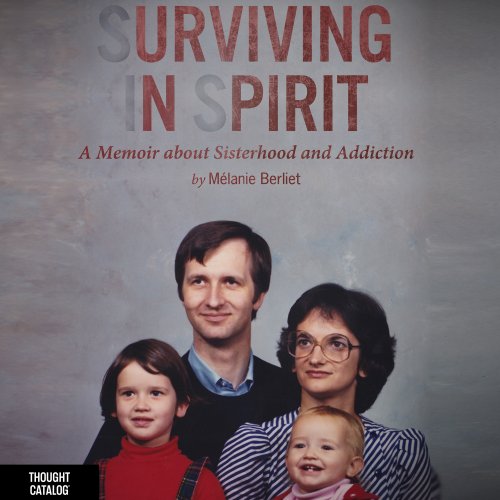 By: Mélanie Berliet
Narrated by: Dina Pearlman
Try for $0.00

What prompts a young woman to abandon the safe bounds of convention for the unknown?

At first, all Mélanie Berliet understood was that she'd lost her sense of what "supposed to" meant. And that her older sister, Céline, was sick.

While it's tough to understand what leads a person into addiction - to witness someone you love kind-of kill herself - the truth is that you can learn from it. By the time Céline died at age 30, she was Kermit The Frog green and she vomited blood more frequently than she was able to eat. In less than a decade, she had gone from summa cum laude Columbia graduate to NYU PhD student to unemployed, rambling, stumbling drunk saddled with a cirrhotic liver beyond repair. By the time Céline died, her younger sister, Mélanie, was no longer a Miss Goody Two Shoes from a waspy Connecticut suburb trotting down the sensible path. She was an adult who had abandoned a secure job on Wall Street to establish a career as a writer committed to exploring fascinating subcultures.

As Céline's illness escalated, you see, a basic lesson crept up on Mlanie: Life is beautifully short, and fragile as hell. Life happens. Gradually, Mélanie stopped agonizing over what she was supposed to do/think/know/read/listen to/watch/feel, or who she was supposed to be/befriend/love/like/learn from. So she pitched projects that sounded crazy and/or dangerous to most, but which gave her a thrill and helped her establish a career as an immersive journalist. She grew some balls, so to speak, after freeing herself from caring about what others might think.

The devastating beauty of what happened to Céline forced Mélanie to question who she is. However unwittingly, in dying, Céline empowered her younger sister to take risks - to live. This is their story.

What listeners say about Surviving in Spirit

super writing and narration. funny and sad. thought provoking. I will read this author again.

this was seriously worse than

anything else I've ever tried to listen to
the voice of the narrator was as bad as the writing wouldn't wish this reading on my worse enemy
seems like a narcissistic writing.
the author shouldn't ever left her day job

Self absorbed, 0 self awareness

This is easily the worst “book” I’ve ever listened to...more like a long (or at least it seems long..), rambling, self congratulatory episode of sex and the city? That’s being generous, however, it’s a somewhat satisfying hate listen, only because it’s free and the author is just awful. Writing is passable at the level of an online click bait article. But any bits of redeemable writing are made ridiculous by the elderly sounding narrator. The sex scenes are somewhat disturbing as they sound like they are being recounted by someone’s grandmother. The author doesn’t even try to reach the most basic level of understanding of her sister’s alcoholism and takes every opportunity to disparage and judge her while going on and on about how great she is by contrast. Recommend only if you have literally nothing else to do or are completely dry of actual interesting audio material- and if you are in the mood for listening to a middle aged millennial Karen congratulate herself for her relatively unremarkable life through the voice of a 75 year old.

I couldn't even finish it. Author can't seem to keep to the simple outline of story, tracking and describing the decline and death of her sister to alcoholism. It's full of about the boring details of her own life, how she gave up a job on Wall Street to pursue writing.

Sooner or later ,Addiction joins more and more families .
addiction is ugly, but our loved ones are not .

Story was too short...what was the point. What happened to her own life?? Should of been a lil longer.

Sometimes I don't know, when I dislike the performer, if it's the actual words written or the tone in which they're being said. This performance was professional enough, but the words sounded like this person was kind of unlikable. I couldn't enjoy this story at all, and once this person really brushed off any sense of moral responsibility about being with a married man, I decided I didn't like who she must be as a person. I wish I hadn't wasted my time.

I can definitely say I love the story in the sense that it feels like a nice teaser. there's so much more the reader is missing I think this story needs to be expanded into a fuller book. What was her reasoning for drinking? The layout was a bit confusing as there was no clear timeline. If the author came out with an extended detailed story I'd be willing to give it a try.

The writing was okay.

I’ve read many memoirs/biographies & autobiographies, and this one was one of the least interesting. The author does not ever ask her sister why she self medicated with alcohol, or what her sister’s struggles were- mentally. Feel like I wasted my time listening to it.

I’m sorry but this was so boring I had to push to get through it. I feel like it had no point to the book. It should have dug deeper so there would have been an actual story line.