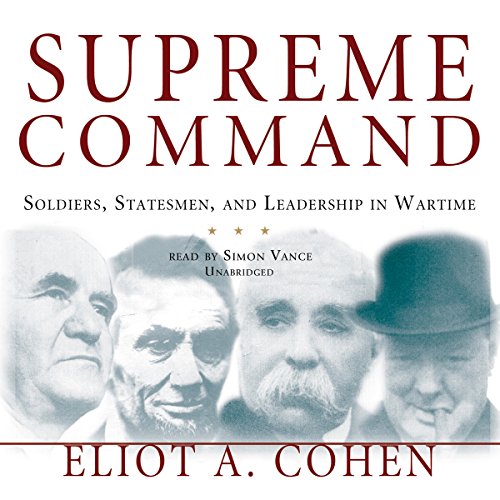 The relationship between military leaders and political leaders has always been a complicated one, especially in times of war. When the chips are down, who should run the show, the politicians or the generals? In Supreme Command, Eliot Cohen examines four great democratic war statesmen - Abraham Lincoln, Georges Clemenceau, Winston Churchill, and David Ben-Gurion - to reveal the surprising answer - the politicians. The generals may think they know how to win, but the statesmen are the ones who see the big picture. The lessons of the book apply not just to President Bush and other world leaders, but to anyone who faces extreme adversity at the head of a free organization, including leaders and managers throughout the corporate world.

What listeners say about Supreme Command

Published in 2002. Does not include Afghanistan snd Iraq. Historical perspective of four leaders is great history.

I believe you should narrate the book and not attempt to be a ventriloquist who attempts to mimic characters in the book. This is a common fact among many audible books that truly diminishes from the great story. It reminds me of being a child with a parent reading you a bedtime story while mimicking a character. That’s fine as a child but this is not a bedtime story.