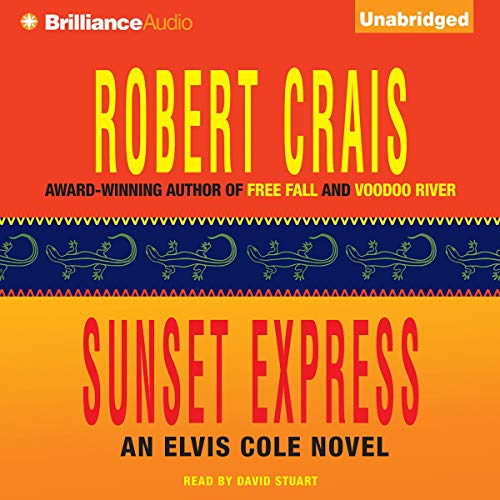 By: Robert Crais
Narrated by: David Stuart
Try for $0.00

When a wealthy entrepreneur is accused of murder in Los Angeles, wisecracking private eye Elvis Cole is hired to prove that the evidence was corrupted and becomes suspicious about the defense attorney's motivations.

Prominent restaurateur Teddy Martin is facing charges in his wife's brutal murder. But he's not going down without spending a bundle of cash on his defense. So his hotshot attorney hires P.I. Elvis Cole to find proof that Detective Angela Rossi tampered with the evidence.

Detective Rossi needs a way back to the fast track after falling hard during an internal investigation five years ago. But Cole needs to know if she's desperate enough to falsify the case against Martin in order to secure her own position.

As Cole and his partner Joe Pike work their way through a tangle of witnesses and an even greater tangle of media, they begin to suspect that it's not the police who are behind the setup.

The sixth book in the Elvis Cole series, Sunset Express is marked by Robert Crais's dark humor and edge-of-your-seat suspense.

What listeners say about Sunset Express

Great Story, Not the Best Narrator

Love Robert Crais and he lives up to his precedent in this book. The performer does fine with fluency and voices, but he has an obvious lisp, which makes Elvis sound a bit fey. It just doesn't fit the character. Still worth listening to for the story, which is quite good.

Yes, to have it re-recorded for better sound quality. Not up to Audible quality. Sounds like they just recorded from a tape that is going bad.

Not as good as some of the other books he has performed.

Did Sunset Express inspire you to do anything?

Narrator and production ruin the book

I love Crais books and have listened to/reader almost all by now. The naarator and production of this book are horrible. I could not tell whether the narrator simply felt like all female characters (and some men) needed to speak with a lisp or if the production was so shoddy that it just sounded that way. Avoid this version.

I read Robert Crais's book 'Taken' which was fantastic. This book was a huge disappointment. Poor narrator. There are two main woman characters in this novel, it is 'grating' to hear him try and impersonate a southern belle. The ending is ridiculous, leaves you so unsatisfied.In short, don't waste your time.

Gone from Thrilling to sappy

The first two books of the series were exciting. The 'can't put the down' with a great narrator and interesting story line. Elvis and Pike made for an interesting read. Book 3, 4 and 5 were no up to this standard which I attributed to the narrator. I.m thinking the editor or friends or someone has provided bad influence. Elvis is getting mushy, the story line is OK, but lacks exciting. Seems that every case involves a movie star. I'm not sure I'm going to read 7. Maybe if I can't find anything else, after all there's the return guarantee.

First Elvis Cole Novel I have something bad to say

Would you try another book from Robert Crais and/or David Stuart?

I will willingly go to the next Robert Crais book because of my enjoyment of his previous novels. I will reluctantly suffer through another David Stuart reading so I can get the information from the book to carry onto the following one (which, thank goodness, has another narrator).

If you’ve listened to books by Robert Crais before, how does this one compare?

The previous Elvis Cole/Joe Pike novels have been a lot of fun. The stories have been interesting, and Elvis Cole has been a witty and fully enjoyable character. Unlike this book, the previous books do not revolve around the relationship between Elvis Cole and Lucy Chenier. In this book, the relationship took a lot of the attitude and the fun out of Cole's character. Without such a big involvement from Lucy, this could have been a solid and fully enjoyable story. The previous novels certainly are.

Who would you have cast as narrator instead of David Stuart?

When the author came back to the main story, it was pretty engaging. Unfortunately, the main story is peppered with Cole daydreaming about Lucy. But it is a generally good story.

I only have one more David Stuart fiasco to suffer through (Indigo Slam) before moving on to a decent narrator. I'm seriously considering skipping it, but I'd hate to lose any kernels of information that may be referenced in later books. So I suppose I'll probably get it.

Readers Make or Break an Audiobook.

What would have made Sunset Express better?

The reader was so poor that I chose not to listen to the book. I will not order anything else with this reader.

What was most disappointing about Robert Crais’s story?

Would you be willing to try another one of David Stuart’s performances?

disappointment; I've enjoyed the rest of Robert Crais's books and would have probably enjoyed this one.

I'm not willing to sit through poor readings

What disappointed you about Sunset Express?

don't bother, seriously... I've got the complete series and it's good -- but skip this one...

I'm not even half way through the book and the sound of this stuffy nose narrator is so annoying! His woman's voice sounds like a deeper more stuffy nosed whine with a lisp! The thing is that the story itself is really good, so I'm continuing on... hand this guy a tissue

I have enjoyed the Elvis Cole series, but this narrator was not for me and made it really hard to follow the story.