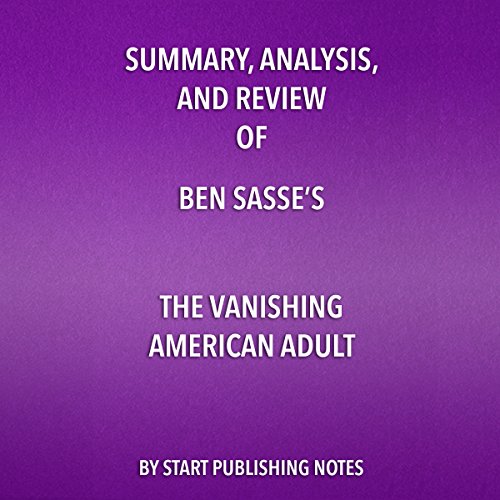 Please note: This is a key takeaways and analysis of the book and not the original book. Start Publishing Notes' Summary, Analysis, and Review of Ben Sasse's The Vanishing American Adult: Our Coming-of-Age Crisis¾and How to Rebuild a Culture of Self-Reliance includes a summary of the book, review, analysis, & key takeaways, and detailed "About the Author" section. Preview: Ben Sasse, the junior United States Senator from Nebraska, is widely considered a rising star in the Republican Party. Sasse, who studied at Harvard and Oxford and later received a Ph.D. in History from Yale, also numbers among that party's most prominent intellectuals. However, he claims at the outset that The Vanishing American Adult is a nonpartisan audiobook: he is diagnosing and attempting to solve a problem that affects both Democrats and Republicans alike, since a lack of self-reliance among young people threatens the future of the whole country. While serving as president of Midland University in Omaha, Nebraska, Sasse encountered a population of undergraduates who were in a profound state of arrested development, unable to properly mature into adulthood because they had been coddled by helicopter parents, and protected from blows to their self-esteem by school administrators. How, Sasse wondered, could these passive teens and 20-somethings become responsible grown-ups? This audiobook is his attempt at an answer.

What listeners say about Summary, Analysis, and Review of Ben Sasse's The Vanishing American Adult