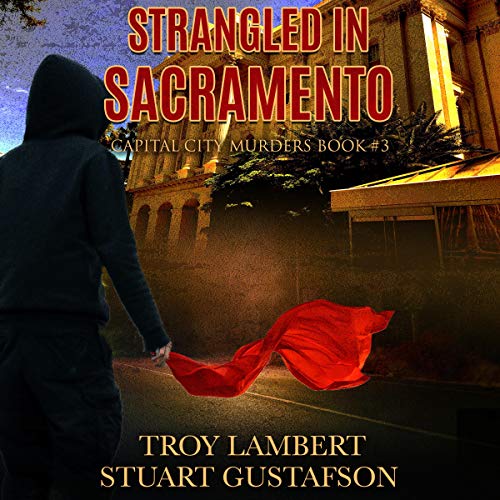 Nick arrived in Sacramento, only to have his camera stolen.

A disaster for a freelance photographer on assignment to photograph every state capital for Travel USA magazine, Nick uses his amateur sleuth skills and his eye for detail to find the thief.

But it turns out his camera theft spirals him into involvement with another mystery.

He turns to a friend Sandra, who he just met in Salem for help with his assignment, and it turns out they share a lot of interests. There is a spark there, but he can’t afford to get caught up in a romance.

The pursuit of his camera leads to a deeper mystery, part of a series of murders. The investigation puts them in the path of the killer. Will they find Nick’s camera and catch the strangler at the same time?

You won’t be able to stop listening to this episode of the Capital City Murders until the very end. Buy the audiobook and catch up with Nick and his adventures today!

What listeners say about Strangled in Sacramento

A great listen! Narrator can be a bit monotone at times but an overall good job.
Sound quality from Larson Sound was excellent!

Note: While this is Book 3 in the series, it works fine as a stand alone story.

Nick has continued on to Sacramento for his task of photographing the state capitals. The past two cities had him inadvertently entwined in murder investigations and Sacramento isn’t any different. A serial killer has been strangling joggers and Nick gets there in time to help the police catch him.

This story is a little longer than the first two and it gives more time for Nick’s character to develop. His camera gets stolen and there’s a lot of time devoted to him figuring out how to get his photography job done. Apparently, he doesn’t have much funds, if any, for buying a new camera, which can be pricey (like $3000). So we get to know a bit about his parents (who want to buy him a camera), his best friend (Patricia? Patsy? errr…. Pearl?), and his new budding romantic interest (Sandra).

Since the plot is pretty straight forward, the story is padded with bits about Sacramento’s capitol buildings, local food, and his almost budding romance with Sandra. Oh, and a fair amount about what they were wearing (which I didn’t care about). While there were some boring parts (for me because I don’t have any interest in fancy cameras or clothing styles), these sections are spread out with little bits of action or conflict which kept the story moving along.

This is still a novella and the cast is small so it was pretty easy to guess who the culprit was. It did take Nick quite a bit longer to figure it out and he had to get peppersprayed to do so – lol. The end wraps up super quick, like the previous books. Then we get a little afterward with some facts about Sacramento, which I thought was a nice touch. 3.5/5 stars.

The Narration: Joseph L. Stevenson is still a good fit for Nick. His other voices have improved a little. He has a little more range in voices this time and while not all the ladies sound feminine, at least they each have their own voice. Some of the voices for minor characters sound a little cartoonish. The pacing is good and there were no tech issues with the recording. 3.5/5 stars.

I received this audiobook as part of my participation in a blog tour with Audiobookworm Promotions. The tour is being sponsored by Troy Lambert. The gifting of this audiobook did not affect my opinion of it.

In this book you have a professional photographer on assignment going across the country to fifty states capitals to take photos for a book. This book is taking place in Sacramento, California. The storyline is well developed and interesting with believable and likeable characters. You haveva strangular roaming the city. You have a camera stolen from tbe photographer. I can't go into more detail without giving away the storyline. This is a short story with twists enough to maintain your interest. The end will surprise the best sleuths. I enjoyed this book

Eye for detail saves the day

Nick arrives in Sacramento and starts to work but his camera is stolen his first night there. He asks his friend Sandra whom he met in Salem for help and the use of her camera while the police investigate. It seems that the theft may be related to a series of murders by the Sacramento Strangler, and of course Nick can't help but be drawn in. This book is fast paced and detailed and the mystery is twisty. The ending was unexpected. I enjoy this geographical mystery series. The stories are short but the cases are interesting. Trouble seems to find Nick at every turn but his eye for detail saves the day. I enjoyed the facts about Sacramento at the end. I look forward to continuing this journey across the US with Nick.

I enjoyed listening to "Strangled in Sacramento". This series are short, but you can finish it in a short span of time. I listened for an honest review.

Third in the series and Nick in the middle of another mystery. This time he was trying to just his job and some one stills his camera. This one had a little twist at the end. Who was the woman. I look forward to the next book in the series.

A good story on a road trip

Nick embarks on his third trip for his freelance photography assignment. He is robbed of his camera and stumbles into a new mystery that ends with a surprising twist. A possible budding romance was introduced in this book. I hope it continues. The narration of the book
Is a little off to me. Nick’s voice is fine, but the female voices seem off to me. A little cheesy sounding.

In book 3 of the series, Nick is once again not looking for a murder but he gets involved in the latest crime. I hope the romance with Sandra goes somewhere in the future books.

I just finished the novella Strangled in Sacramento: Capital City Murders Book #3. The premise for the series is intriguing and I look forward to each new book.

The protagonist Nick O'Flannigan is a freelance photographer and an amateur detective. Nick has a contract to take photos of the capitol buildings in each of the 50 US capital cities over a period of 50 weeks for Travel USA magazine. While in Sacramento, CA, he also assists the police in identifying a serial strangler.

Although I enjoyed the story very much, I wish that it had been longer so that the plot could have been more develop.

A well-written story from a very good author

Strangled in Sacramento: Capital City Murders Book #3, my sixth read from author Troy Lambert. After reading Silenced in Salt Lake: Capital City Murders Book #11, my first (short) read from author Troy Lambert, I wanted to read more in the series and this one doesn't disappoint. I look forward to reading more in this series & from this author. (RIP Marley January 20, 2014 - July 24, 2018).

"1 more city down; only 47 still to go."
Six foot six tall, ex-athlete now turned professional photographer, Nick is travelling found the country taking pictures of the capital buildings for a commissioned book. This week, it's Sacramento but there's a problem. Someone has stolen his camera. And despite his editor's warnings, he seems to be getting involved in another murder investigation.

A short, quick to read book, third in the Capital Murders series, ably narrated by Joseph Stevenson. The dialogue is slightly stilted, the text simple, mundane but all right. Nick and a friend who joins him for his time in Sacramento so seem to spend a lot of time eating, or unconscious, and the end of the tale, though unexpected, did not solve all of the questions raised. But the overall idea is an interesting one and I will certainly try another couple, at least, in the series.

My thanks to the rights holder of Strangled in Sacramento, who, at my request, freely gifted me with a complimentary copy via StoryOrigin.