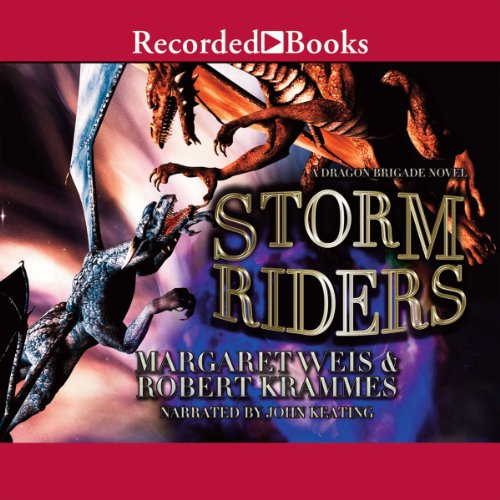 By: Margaret Weis,Robert Krammes
Narrated by: John Keating
Try for $0.00

In a world where magic is intrinsic to the fabric of everyday life, two kingdoms, centuries-long enemies, have long sought a powerful magical weapon that will win them lasting dominance. But neither realm is ready when they are both attacked by the Bottom-Dwellers, a bitter people whose own land was destroyed, and who now live only to take vengeance on those they blame for a wretched life in the storm-tossed abyss they inhabit. Using contramagic strengthened by blood sacrifice to attack the world above, they threaten to bring down whole cities, or even the island kingdoms themselves. Freya and Rosia are forced to put aside their age-old conflict to defend themselves, or risk losing everything.

What listeners say about Storm Riders

good build up and nice cliffhanger

So happy I found this series, couldn't recommend it more strongly!

Officially this is book #2 in a series of 6 books (see below) - you won't be disappointed! Love the characters and love the world. You'll want to read all six books in this series for sure!

Appropriate for all readers who love fantasy - no "one-off-sex-scene" to ruin it for sharing with your friends and family.

story was really good liked everything except the narrator on the book.story can't end like that.
good, too short

The "performance" kills it

I can usually handle when a book in a series is performed by a different narrator, but Mr. Keating is just hard to listen to. His voice is pleasant enough, but trying to keep track of who is speaking is very difficult - for the most part he reads all the parts the same, except for adding in accents that varies for a given character. I gave him a few hours to see if I could get into his performance, but it was very distracting and I just can't. So I'm returning the audiobook and I'll buy the kindle, then I'll jump to book three.

Love the book, hate the narrator

I have the entire book series and love it. However they changed narrator on just this book from the guy that does books one and three. The difference is jarring and makes me not even want to listen. Audible, if there is a series make sure the entire series is done by the same person.

the first book was better and the reader was better as well. i got use his voice over time.

While John Keating has done excellent work elsewhere, this story is a bit jarring due to his pacing being so different from Kirby Heyborne(narrator for books 1 and 3). The story is excellent, but I struggled reconciliation between the readers.

Lousy Narrator But a good second book of the saga

Was Storm Riders worth the listening time?

Yes it was as long as you ignore the narration

Please bring back the first book narrator for the rest f the series.

didnt get that far

This reveiw is not complete because i could continue listening to it with this narrater. Please bring back the original books narrater! I am very busy with work so i dont have a chance to read the books. The only time i have for a good book is listening on my drive to and from work. This narrater made it impossible for me to finish this book. i loved the first book and would really like to finish this one. New narrater please!

too bad the narrator was so horrible... good story

If you could sum up Storm Riders in three words, what would they be?

What was one of the most memorable moments of Storm Riders?

Listening to the narration. He pronounced everyone's name completely differently than the first narrator. His inflection was horrible. He put an accent/emphasis on the last syllable of too many words (as if that made it an actual accent) and made statements into questions. The dragons sounded drugged. In all, it sounded like he couldn't decide if the characters were drunken Scots, Jamaicans, Germans or Frenchmen.

He could have listened to the narrator of the first book. He very nearly ruined the book for me.

The story itself was interesting. I liked the political intrigue and multi-dimensional characters and alliances.