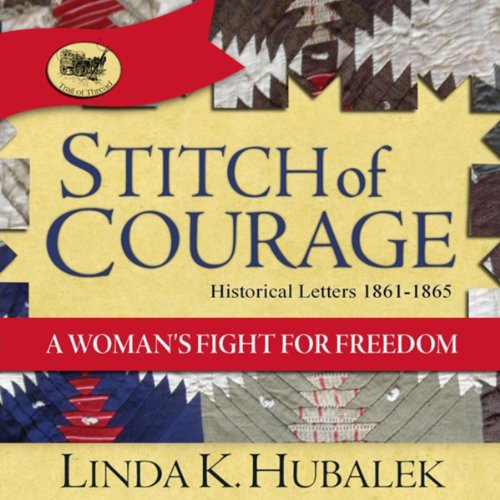 Stitch of Courage: A Woman's Fight for Freedom

Feel the uncertainty, doubt, and danger faced by the pioneer women of Kansas as they defend their homes and pray for their men during the Civil War.

We think the Civil War took place in the South, but the Plains States endured their share of battles and tragedy. Not only did Kansas and Missouri experience a resurgence in the terrorist raids that had plagued them in the years before the war, but the Confederate Army tried several times to sweep across the Great Plains and capture the West.

Stitch of Courage, the third book in the Trail of Thread series, tells the story of the orphaned Maggie Kennedy, who followed her brothers to Kansas in the late 1850s. The niece of Margaret Ralston Kennedy, the main character in Hubalek's Thimble of Soil book, Maggie married the son of Deborah Pieratt, whose story was told in the Hubalek's Trial of Thread book.

In letters to her sister in Ohio, Maggie describes how the women of Kansas faced the demons of the Civil War, fighting bravely to protect their homes and families while never knowing from one day to the next whether their men were alive or dead on the faraway battlefield.

What listeners say about Stitch of Courage: A Woman's Fight for Freedom

Loved the story hated the narratiation

I would recommend they read and not listen to this story. The reader was a huge change from the previous books in this series. If she had read the first book I definitely would not have listened to any more and may not have finished the book. I'm still listening now because I want to finish the story.

This reader exaggerated many sections of the book with fake emotions as she read. It just took much away from the enjoyment and I struggled to listen to her. I stuck with it because I wanted to know how the series ended.

The reader needs more training on cadence and voice control. Sorry to be so harsh but it really bugged me.

I have read all three of these books in this series this book introduces the pioneer women and their courage in settling the west. Just enough accurate history of the Kansas troubles to really keep one interested.