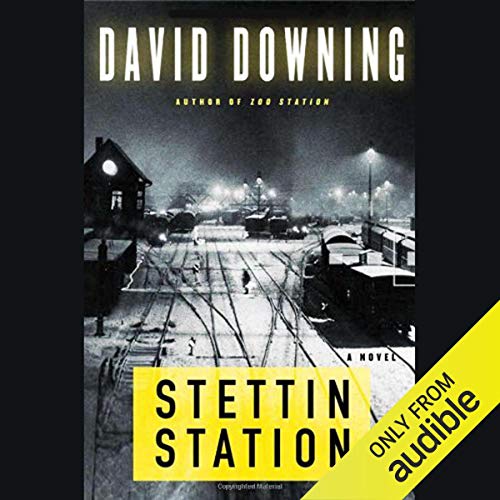 By: David Downing
Narrated by: Simon Prebble
Try for $0.00

In the fall of 1941, Anglo-American journalist John Russell is still living in Berlin, tied to the increasingly alien city by his love for two Berliners: his 14-year-old son, Paul, and his longtime girlfriend, Effi. Forced to work for both German and American intelligence, he's searching for a way out of Germany. Can he escape and take Effi with him?

“With strong, vivid prose, the author maintains a high level of suspense throughout, and makes the reader care about his leads.” ( Publishers Weekly)
“This is a tense spy thriller that is particularly good at evoking the stark terror of living under the Nazis, and reminding us there was a German opposition to Hitler.” ( Euro Crime)

What listeners say about Stettin Station

Each of the three books in this series is a gripping thriller in its own right but they are even better if read in sequence. This is the third and the premise of the main protagonist being a British/American journalist living in Berlin works well to give us a cynical insight into how it must have been to live under the Nazi regime and with a reminder that there were Germans opposed to the state. Evocative of a desperate time and place, the tension, excitement and suspense build as the situation for John Russell deteriorates. This third book lives up to the high standards of the first two.

Previous books in this series have been brilliantly narrated by Simon Prebble. He's good on this one too - but the production values are shockingly bad - as in, I'm shocked someone let it be released and sold in this state. Frequently words or phrases are replaced by jarringly differ audio - poorer quality. It's a real botch job. Not so bad that I didn't listen to the whole thing.

The story is good, but drags a little in the third at. If you've read the previous books you'll be sufficiently invested in the characters and entertained by the historical detail to enjoy it all the same.

A fine set of stories

When looking for a new audio book, I sometimes look at other books read by my favourite narrators and so it was I came up with the David Downing "Station" set read by Simon Prebble. All three books in the series have been thoroughly enjoyable, the only thing that lets down Stettin Station being the numerous edits that have taken place and have been recorded with completely different audio settings, absolutely no bass whatsoever. So when one of these occurs, albeit short in length, Simon sounds like he's got his head in a toilet. There are so many of them too and it really spoils what would have been and excellent final book in the series. Shame.

A tense thriller that captures the fear and atmosphere of Hitlers Germany.I found myself marvelling at how the author can write and instill in the listener the horror that is happening in Germany
The book is superbly narrated by Simon Prebble.
Buy it after listening to the previous two books you will not be disappointed

A really engaging story and the narration is excellent. Other reviewers have noted problems with the production, these are annoying but not enough to abandon the book. But: WHY must there be music with audiobooks? Nobody asked for it. Please stop adding it!!!

No. The recording is awful

What other book might you compare Stettin Station to, and why?

The stories are still high quality...BUT

The quality of the audio leaves a lot to be desired. Clearly, edited sections have been inserted after the original recording. The quality of these added parts is much poorer (it sounds like he read them inside a cupboard). This is disappointing and distracting.

Best of the three

Excellent third book and the best of the three. They should be read in sequence to appreciate the development of the story. Awaiting the fourth, Potsdam Station.

Great stuff, I was through this in no time, very exciting stands up well with the preceding novels. The only issue here was that the quality of the recording was just as good.