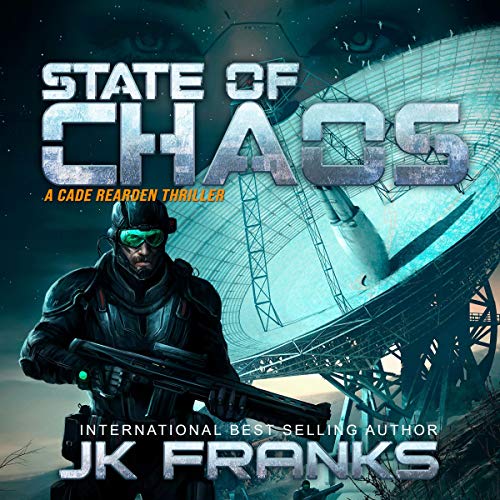 His mind has been fractured for years. Now, he could be humankind’s only hope of stopping the end of our species.

Special Forces Captain Cade Rearden struggles to control the whispers in his head. Plagued by multiple personality disorder, he nearly spirals into insanity after extremists kill his whole team and hold him captive. Defeated but not broken, he can hardly believe it when an artificial intelligence named Doris rescues him and then recruits him for an impossible mission.

Pulling together a crack military team, Rearden must take down Janus, a rogue AI intent on launching a chain of deadly attacks on American soil. And the key to staying one step ahead of the enemy could lie in understanding and protecting the incredible knowledge that Doris possesses. Knowledge that didn’t originate here on Earth.

Can Rearden somehow control his internal chaos and the battles raging around him? Can he and his team prevent the genocide of the whole human race? The stakes don’t get much higher.

State of Chaos is the first book in the riveting Cade Rearden science fiction thriller series. If you like near-future technology, complex heroes, and high-octane action, then you’ll love JK Franks’ explosive adventure.

i really liked this book. new author for me. narration was good. im a military fiction fan. this qas detail on the mol side but better that than done poorly like so many other. im going to read whatever i can find of his.

Again JK Franks with a great story. After the Catalyst Series, here comes this amazing science fiction book which leaves you wondering what could AI’s be capable of.
Can’t wait for the second book!

much better than I expected

First story from this author, not going be last.

early I struggled to fit divergent parts together. Had no idea what was going on. But then parts pulled together in a very good way.

The book was very well written, author knowledgeable and definitely kept my attention. The narrator was extremely good, would listen to anything by him.

Thank you, I will be looking for more stories by fine writer.

This is the fifth book I’ve read/listened to by this author (previously listened to the entire Catalyst series) and I’d love to continue this series. I enjoy the speculation about AIs and their motivations and abilities based on initial programming. Some Sci-if ideas have become reality...for example, “beam me up Scotty” and flip phones. If only a small amount of possibilities in this book become reality, I am very scared! For me, this is more a story about what could happen when we underestimate our understanding and place too responsibility in the hands of advanced AIs (not a military, fight and go get the bad guy).

The publisher’s summary leads us to believe this book centers around Captain Rearden. It does not. We are introduced to him at the beginning of the book, then we are introduced to a group of young kids who accidentally discover an advanced AI named Doris. The story then centers on them, Doris, and others working with them. It is quite a while before Rearden makes his way back into the story. He is also not the one putting together the team to take down the malevolent AI Janus, nemesis to Doris. I’m glad! This storyline is way better. It’s not one Rambo guy going around with some tag-alongs. There are many people, each playing a specific, important role.

This book has a conclusion and does not have an obvious lead into the next book. I’m very curious where this series will go from here.

This is the first book I’ve listened to by this narrator ( Lee Strayer ) and I would listen to another. He uses a few well placed, subtle sound effects (like radio transmissions). He does great performing this book. His male and female character voices are well done. He has a good range.

There are no explicit sex scenes, overly excessive violence. There is the occasional swearing.

Not What I Thought

This story is about a good AI and a malevolent AI duking it out through human surrogates. It is, at times, slow. The summary implies that this would about Cade Reardon, but it is not. If you like stories about AIs and the potential dangers and social implications of AIs, you will probably like this. Since I don't care about the issue too much, I didn't find this to be a great listen.

I cannot wait until book 2 comes out. The gamesmanship between Janis and Doris was very intriguing. I cannot state enough how much I enjoyed this book. I get how the politics played into the situation but I still found it annoying. I was given this free review copy audio book at my request and have voluntarily left this review.

Great start to the series!

From beginning to end this story was wonderful although you really need to listen because the story line moves fast which personally I liked. There’s a lot of different content but didn’t seem to have the hours of meaningless dribble that some authors use to get the pages filled.
The story was a completely original one(at least for me) the main character had depth and were very relatable.

Narrator did a terrific job also. His character voices were distinct and his delivery was spot on like he’d helped write the story.


Thank you for the opportunity to review this audiobook that I received free at my request.

A good solid start to an interesting new series

JK Franks has created a complex world ripe with intrigue, danger and suspense. It being set pretty much in a modern day setting makes the new high tech that's being discovered all the more intriguing. And the possibility of extra-terrestrial involvement harkens back to Arthur Clarke's most famous story...

The narration is masterful as is always the case with Lee Strayer. The story is complex and unique, although it does seem to move slowly at first, although the momentum builds with every chapter and before you know it, you're racing along wondering what comes next... and what the next book holds!

A Fight for the Future

State of Chaos is the start of a new series by a favorite indie author of mine, JK Franks. I was given the opportunity to get the audiobook as a free review copy, and given I'd loved the prior books of his I'd purchased and gotten, I was glad for the opportunity.

State of Chaos is once again a series founded in a non fantastic sci fi universe (eg no walking dead). But in this scenario, we are dealing with warring AI's and humans in a world bordering on an apocalypse. A group of humans along with a good AI, battle with a rogue AI and the humans aligning themselves with it. The plot was rich and full of action, schemes, events, and people, but oddly it never became too confusing. The book starts with some historic back stories and origins, and then moves several years later to a series of triggering events leading up to a pending apocalypse.

I did find myself intrigued by the book being listed as a Cade Rearden thriller. Cade Rearden was a significant character in it, but it felt more like is was a multi lead character, and I wouldn't have called Rearden the lead character. So much was going on with so many characters it would be hard to label it as one character's book, being a true ensemble thriller. I am intrigued though in wondering what the future books will take on - as in concentrating more on Rearden, so all the other great characters would be more sidelined or not included. But the book was highly enjoyable, so I am pretty interested in seeing what the next book will bring. State of Chaos was a fantastic contained story though, so don't worry that you will be left with a cliffhanger...
The narrator was great, and easy to listen to, and no clarity or pacing issues. I would definitely listen to a further books by this narrator.

AI vs AI - The Real Story

JK Franks knows how to write a story that will captivate you. I have read at least one other story from him and it was the same way. This one was especially hard to put down.
I don't know who comes up with the "Publisher's Summary" but to me it does not truly fit the story as told.
State of Chaos is supposed to be the first in a series of "Cade Rearden Thriller" It does a decent job of introducing Cade. However, in this story he is at best a secondary player.
This story is truly about Doris. Cade is just one of many that Doris recruits to help in her battle to save mankind from a rouge AI named Janus.
Sci-Fi, next gen tech and city shattering battles are definitely part of this story.
Lee Strayer does an awesome job voicing this story. Excellent pacing and character differentiation.

After having read this one I know that it was one that I would have spent my credits on. However, lucky me...
I was given this free review copy audio book at my request and have voluntarily left this review.
Purchase only when you have 17 hours to spare. You won't want to put it down.
Enjoy