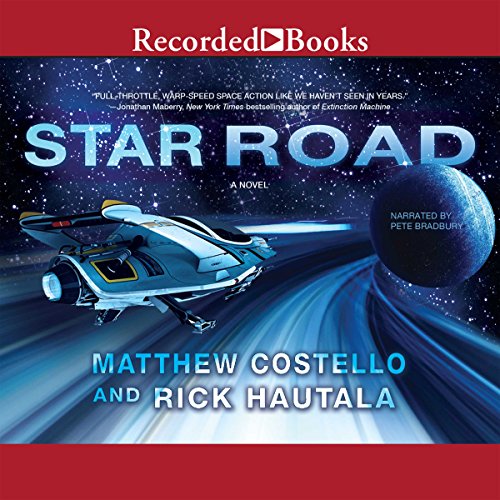 By: Matthew Costello,Rick Hautala
Narrated by: Pete Bradbury
Try for $0.00

A rebel and an outlaw lead an unsuspecting group of adventurers on a secret mission across the vastness of space, in Matthew Costello's Star Road. Ivan Delgato, a former leader of a rebel group called the Runners, is released from jail on the condition that he carry out a secret mission for the World Council. His assignment is simple: stay under cover, but do absolutely anything necessary to reach the planet Omega IX and offer the renegade Runners clemency if they surrender - which may be complicated since Ivan's brutally violent brother has taken lead of the Runners in Ivan's absence.

In search of the Runners, Ivan catches a ride out to the wildest reaches of the galaxy via a mysterious transportation system, the Star Road. His fellow passengers on Star Road Vehicle-66 are a suspicious group, all with their own hidden reasons for traversing the star road. As the travelers contend with increasingly deadly encounters, it isn't long before suspicions build against Ivan. And as the Runners must choose one brother over the other, on a planet filled with ancient secrets, those who survive will confront a mystery that changes the Star Road, and humanity, forever.

What listeners say about Star Road