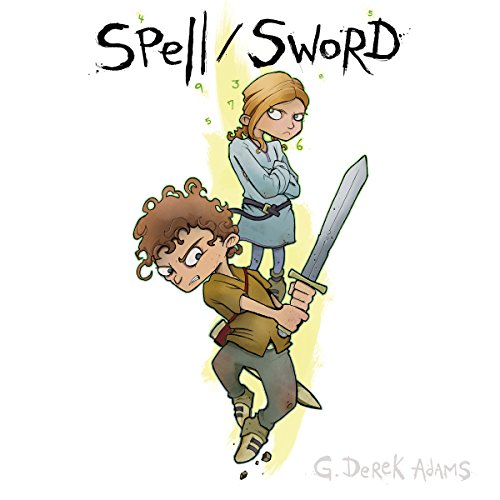 Rime is a wild mage. She can bend the very fabric of reality, but at a cost - a cost to her health and her sanity. Her power is unstoppable but it leaves her empty, weak, and often unconscious. Jonas is a squire on the run - running away from the shadow of murder. They travel together to find the one person that can save Rime from the wild magic, from the inexorable madness and death that comes to those who are born to ignore the rules of the universe. The Gray Witch of the Wheelbrake Marsh, a creature out of a fairy tale.

What listeners say about Spell/Sword, Book 1

What did you love best about Spell/Sword, Book 1?

The incredible writing paired with incredible acting made this listening experience an amazing treat :) I can't wait to listen to the next book and hole the series carries on forever! We need more fantasy like this!

I loved Jonas because he was so steadfast! He might not always understand what is going on, bug once he has made up his mind there is no changing it! He does the right thing (or at least she HE sees as the right thing) and follows the Code because he is a Squire and noone can take that from him. It has become his being and though he sees the world as it is (as much of it as he understands) he still does what he knows is right in spite of what others do or say to him. It is inspiring that his spirit cannot be broken.

Have you listened to any of Rachel Ahrens’s other performances before? How does this one compare?

This is the first performance by Rachel Ahrens I have ever listened to but I look forward to listening to many more by this talented voice actor! She portrays all the characters with depth and irreverence just as they are obviously written. I can't imagine either Rime or Jonas voiced by anyone else. I think I would cry. I fervently hope she continues on with this unique series so we can continue to enjoy it to its full potential :)

This series must be listened to (or read) in order. This is the first book. I can't wait to listen to Riddle Box!


Rime is a wlid mage. Her kind has been searched out and eradicated because of their madness and incredible power. Lucky for her, her father loved her and hid her, all the while educating her and shielding her from her true nature. Too bad she knows she will now be hunted... If only she can get to the Gray Witch and learn the secrets of controlling her magic! She does not want to die or go mad. Does the Gray Witch truly exist? Or is she the false of of a Faerie tale? Will she be able to find her? Can she convince her to help?


Jonas is still at heart a Squire. He loved his Master and took his teachings to heart. No matter what anyone says or does, he will stay true to the Code. So what if he is a bit of a slow learner... At least when he learns something he learns it fully! He longs for a purpose now that he can no longer be a true Squire. Will he ever find anything to give his life meaning? Will the mistakes of his past catch up with him? Can he continue to be true to himself and his Master's teachings when noone else plays fair? Should he quit drinking?

***This series is suitable for middlegrade through adult readers who enjoy irreverent, snarky fantasy filled with comical characters and indomitable antiheroes who eventually learn that they need friends or life is not worth living or even survivable :)

"Spell/Sword" was definitely a worthwhile listen. I loved the main characters of Rime and Jonas and all the supporting characters were awesome as well. The plot was good and I agree with another reviewer that this book would perhaps be good for a slightly younger audience but it does have some language. The story was cute and G. Derek Adams has a neat writing style.

Rachel Ahrens did a good job reading this book. I think her voice fit the characters well. There were a few places where it was a bit monotone but I think it went with the story. Overall, this was a fun adventure. I look forward to more from both author and narrator.

What does Rachel Ahrens bring to the story that you wouldn’t experience if you just read the book?

a little too one noted for me....just a nice read/listen...no acting voiced to it

This is an enjoyable book for YA and adults as well. I was pulled in from the very beginning so I listened to the book in just a couple of days. I loved both Rimes and Jonas and all though they are exact opposites they are great together. I loved the world the author has created for us and this book has everything I love. mages, witches assassins and even pirates. Definitely recommend this book for all fantasy readers.

Two youngsters on the run

Where does Spell/Sword, Book 1 rank among all the audiobooks you’ve listened to so far?

I'm a fan of fantasy novels as well as of audio books, so I was intrigued when I was offered this book in exchange for an honest review. As far as the story goes, I'd say it ranges in the middle field.

Would you recommend Spell/Sword, Book 1 to your friends? Why or why not?

I'll certainly recommend it to my son, who, like me, loves fantasy books, and he is into fantasy games, too, so I'm sure he'll enjoy it.

I really liked how she brought the emotions of the characters across, for example I could 'see' Rime roll her eyes at the ignorance of Jonas. :)

The book took a while to grow on me. It's fairly easy to follow scene changes in a printed book, even if they don't have headings, but it's not so easy in an audio book, and some of the very sudden changes threw me for a moment. I like the idea of the book, and I rooted for the main characters, because even though the book is fairly fast paced, they have some depths. Somehow, the plot seemed a little short, though, I felt it all went a little too fast. Then again, Rime *is* in a hurry... On the whole, I enjoyed listening to the book, and it was well narrated.