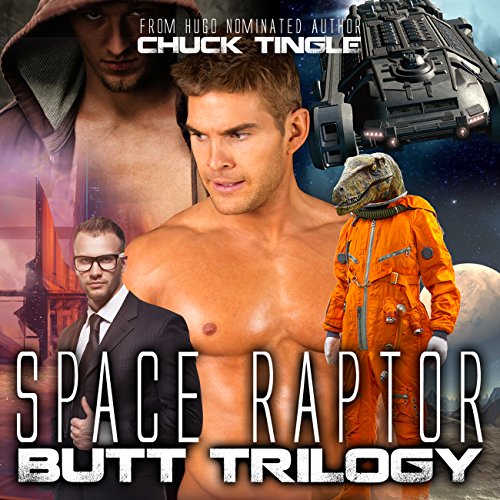 With his genre-defining work, Space Raptor Butt Invasion, Chuck Tingle proved that even gay dinosaur erotica could be nominated for a Hugo Award, the most prestigious honor in science fiction. Nobody could have expected what would happen when the story continued. Collected here is the entire trilogy of Chuck Tingle's history making Space Raptor Butt series.

Space can be a lonely place, especially when you're stationed by yourself on the distant planet Zorbus. In fact, Lance isn't quite sure that can last the whole year before his shuttle pod arrives, but when a mysterious visitor appears at Lance's terraforming station, he quickly realizes that he might not be so alone after all.

After a year stationed on planet Zorbus, astronaut Lance Tanner and his raptor lover Orion return home to find that they are not greeted as heroes, but as villains.

Unbeknownst to Lance, his space travels have been funded by the villainous Scoundrels Inc, a corporation that has deep ties to the illegal trade of unicorn tears and a destructive mining project at the core of the earth. Now Lance is on trial for a number of false charges; from having connections to the wicked Scoundrels, to being too strange for space.

Soon after blasting off on their mission to find refuge for the people of Earth 1 on the dinosaur inhabited Earth 2, Orion and his space raptor lover Lance find a spaceship stow away, the notorious CEO of Scounrels Inc, Vam Dox. Vam claims that his intentions are pure, but it's hard to trust such a sad, strange man.

After landing in Hugona, the planet capital of Earth 2, our heroes restrain Vam Dox and head off to secure an important diplomatic relationship with the pterodactyl president, but that's when all hell breaks loose. Soon, Vam Dox is storming the capital with a band of rabid dogs, and Lance and Orion are wrongly taking the blame!

I really enjoyed Jurassic Park by Michael Crichton so I thought this would be a good book to follow up with.
Boy was I surprised! Not child-friendly whatsoever, but a high recommendation for those who are fans of both space & paleontology.

I had friends suggesting it to me because it was funny and since I enjoy bad books, I thought I'd try out out. Pretty disappointed because it was plain, boring and not really worth my time