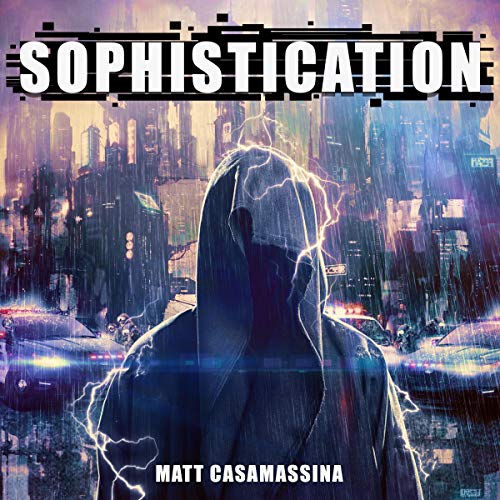 By: Matt Casamassina
Narrated by: Joshua Nicholson
Try for $0.00

Step into a near-future America overrun by competing tech giants and widespread social decay in this raunchy, violent, hilarious, and disturbing science-fiction thriller.

You have 30 days until we take over, a cloaked figure warns the House of Representatives and then vanishes into a bolt of electricity. The same morning, Miyuki Mitsuraga, a struggling video game journalist, is inexplicably invited to interview the dark terrorist as the media spins into a frenzy and internet schadenfreude runs wild.

Sophistication follows her and four others, including a drug-addicted special agent, a seasoned senator, a quadriplegic, and a well-financed serial killer as their lives converge amid displays of technology and power well in advance of anything the world has ever seen.

What listeners say about Sophistication

I started this title unaware of what I was really getting into. Luckily for me it was excellent and held me captive for the few days I listened to it. I plan on listening to it over a few more times just to make sure I got the full view of the authors vision. I’m definitely awaiting the next installment as I’m sure there will be. Congrats Matt and I look forward to going along on the journey along with miyuki and her group!!!

The story is great. not amazing but still great. The audio production however IS amazing. extremely well done. Kudos.

i found myself unable to put this down. This story was well written and a very quick pace! Love books where you can relate to the characters and this one had all that. I already read Mr Casamassina’s first book in “Dead Weight” and was looking forward to his next! Now I can’t wait for his next one! Great work Matt!!!

What a ride. Every time I thought I had the story arc pegged and thought I knew where it was going, Sophistication zags, introducing a new plot element that solves one big mystery and introduces the next. The story is not for the faint of heart, often delving deep into horror territory, but always returns to its sci-fi roots. If you’re a fan of imaginative, over-the-top Matrix-style action in a near-future setting, you can’t go wrong here. Great narration with audio effects and plenty of accents by Nicholson, too.

I was hoping for an intelligent story, but not so much. Just terrorist temper tantrums from the its not fair society that refuses to be accountable for their own actions. Sad I was hoping for a good story.