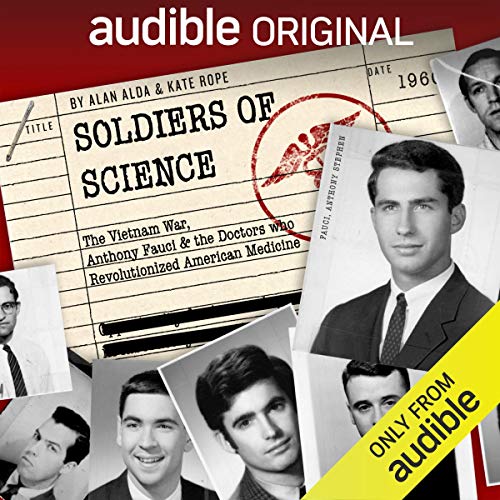 Go Behind the Scenes of Soldiers of Science

Alan Alda, 7-time Emmy Award–winner, played Hawkeye Pierce and wrote many of the episodes on the classic TV series M * A * S * H, and appeared in continuing roles on ER, The West Wing, 30 Rock and The Blacklist. He has starred in, written and directed many films, and was nominated for an Academy Award for his role in The Aviator. His podcast Clear + Vivid has been downloaded 11 million times. His interest in science led to his hosting the award-winning PBS series Scientific American Frontiers for 11 years, on which he interviewed hundreds of scientists. Also on PBS he hosted The Human Spark, winning the 2010 Kavli Science Journalism Award, and Brains on Trial in 2013. On Broadway, he appeared as the physicist Richard Feynman in the play QED. He is the author of the play, Radiance: The Passion of Marie Curie. He has won the National Science Board’s Public Service Award, the Scientific American Lifetime Achievement Award and the American Chemical Society Award for Public Service, among others. He is on the Advisory Board of the World Science Festival and is a Visiting Professor at Stony Brook University’s Alan Alda Center for Communicating Science.

Kate Rope is an award-winning freelance journalist, specializing in health and family, whose work has appeared in numerous publications, including The New York Times, The Washington Post, Time, and CNN. She is author of Strong as a Mother: How to Be Happy, Healthy and (Most Importantly) Sane from Pregnancy to Parenthood and coauthor of The Complete Guide to Medications During Pregnancy and Breastfeeding.
Our Patients & their Mother
The Doctors (in order of appearance)
The Investigators
Treva Gray: A Texas mother of two who arrives at the NIH in the winter of 1969, hoping the doctors there can cure her very sick children.
Valerie & Clark Cortinez: A six-year-old child and her younger brother brought to the NIH as a last chance to cure them of a condition that will give them heart attacks before they reach adulthood.
Dr. Robert J. Lefkowitz: Nobel Prize-winning biochemist who applies to the NIH during the 1960s because of the doctor’s draft. He and Alda talk about the spirit of this program, how the sudden loss of his father nearly derailed his career, and the importance of his protein-coupled receptors to the medicines we take today.
Dr. Anthony Fauci: Now America’s favorite doctor, but back then just a young kid graduating from med student willing to serve but also eager to do research and answer a president’s call to service. He takes our team on a tour of the NIH labs and talks about the work being done there today during the global pandemic.
Dr. Harold Varmus: A former head of the NIH, Varmus provides the history of the NIH and how it was shaped by President Franklin Delano Roosevelt. He and J. Michael Bishop won a Nobel Prize in the 1989 for their work on oncogenes and their relationship to cancer.
Dr. Richard Edelson: Known for his research in Non-Hodgkins lymphoma and breakthrough treatments for cutaneous T-cell lymphoma that led to the first FDA-approved immunotherapy for cancer. His son, Ari, grew up hearing his dad tell the story of the "yellow berets."
Dr. Stanley B. Prusiner: A major objector to the Vietnam war after seeing soldiers with guns on his college campus. Studies under the famed biochemist Earl Stadtman and discovers the virus protein, the prion, which plays a critical role in the breakout of mad cow disease. He wins a Nobel Prize in 1997.
Dr. Michael Brown: An extroverted young doctor who always wanted to be "physician scientist." He forms a partnership with Dr. Joe Goldstein and both set about trying to help Treva Gray and her children. A goal that changes their lives and careers forever.
Dr. Joe Goldstein: Brown’s friend and equally brilliant colleague who ends up at the beside of the young Valerie Cortinez and her brother. Together, he and Brown become so fascinated by the case, it eventually leads them to a startling understanding of cholesterol, which earns them a Nobel Prize. Their research paves the way for the statins that millions of us take today.
Victoria Harden: First historian of the NIH who joins in the 1990s. She notes that the NIH was a tremendous creator of science but not so great at keeping track of its own history.
Melissa Klein: A college intern at the NIH, one summer she works for Harden. It’s she who discovers the lost history of the Soldiers of Science in documents tucked away in a basement. Comparing it to the famously influence PayPal mafia of Silicon Valley, Klein concludes the innovation in health and medical treatments we’ve experienced over the last 50 years may not have happened as quickly had this group of medical doctors not been together at the NIH during the Vietnam war. But how the program also limited the medical and research careers of women and persons of color who were largely not able to take advantage of this program.
Pierre Azoulay: A professor at the MIT Sloan School of Mangement who studies biomedial innovation. He used the early research of Melissa Klein to study the long-tail impact on the doctors and the medical industry. He studied how the Soldiers of Science program continues to pay it forward and whether it’s something we could ever do again.
ORIGINALS

These selections bring important perspectives on some of the most pressing scientific issues of our time.

What listeners say about Soldiers of Science

Very worth your time

This is the second book in the story of the history great minds coming together by the needs of their time creating what we now know as modern medicine. It’s in times of crisis, and collegial progress is the expectation, that’s where great leaps are made.

Incredible history everyone should know!

I found this amazing 4-part podcast very informative and captivating--especially given the pandemic we are still living through as it has given me hope beyond the vaccines that we could confront future global medical challenges.. I wish those who rely on the incredible discoveries from medical science but do not choose to acknowledge how fortunate our world is to have had the National Health Institute established and funded by our government for the good of all humankind. I support not only continued funding of this invaluable research establishment, but a draft of some sort that would lead the most brilliant amongst us to find their way to serve in this selfish endeavor.

I think this is going to be a very good series. Alan Alda does a fabulous job narrating it.

I love that Alan Alda lends his voice to this compelling history of how the draft led our nations best and brightest doctors to gather at the NIH and produce some of the worlds fastest and most impactful treatments and cures for humanity.

This was sooooo good.

I thoroughly enjoyed this wonderful production. Alan Alda is a wonderful narrator, and the story was amazing. I’m grateful for the soldiers of science and fir being an American. One of my favorite lines was from the doctor who was absolutely opposed to the war, who protested at the time, and expressed his gratitude to have the right to do so. Amen.

This is a very compelling story of some of the most important medical breakthroughs of our country. All because of the perfect storm created by the Vietnam War!

Excellent series! I work in research so this was particularly close to my heart. Fascinating!

a piece of histry that would have been lost except for the investigators and now Alan Alda. highly recommend

I had no idea!

It was so interesting to hear about the relatively little-known chapter of history, and it was inspiring to learn of this amazing flower that grew out of the cracks of a tumultuous and divided time. A very timely take. We could learn much from the story of the Yellow Berets.

Incredible history to learn at age 55!!!

I wonder how things might have turned out differently had this been a part of our history books...seems we've done a complete 180- and it's sad...BUT HERE IS THE STORY OF WHO AMERICANS WERE AND WHO WE CAN STILL BE. As said in the last episode...we MUST "look inward" vs. a Peace Corps that does good in other countries. Let's get one who looks at areas of our own country, and does good things! Awesome podcast. I HOPE that AUDIBLE will allow other podcast programs to share this. That would be a great start!!!