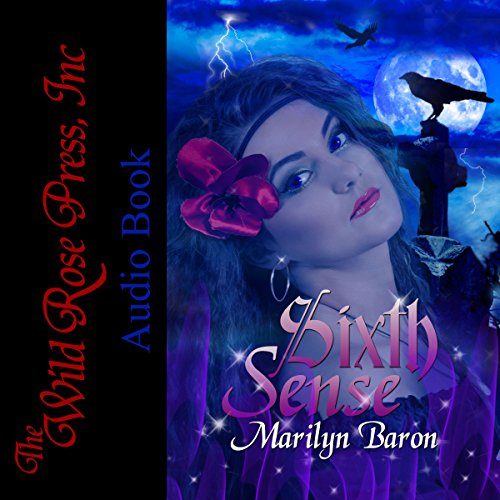 By: Marilyn Baron
Narrated by: Daniel V. Nobles
Try for $0.00

Reluctant psychic Katherine Crystal, dubbed "Crystal Ball Kate", is thrust into the national spotlight when she accurately predicts the death of a movie actor's young son in a private plane crash. Besieged by requests to use her powers to help others, she realizes why her parents had warned her never to let anyone know of her visions.

By-the-book Atlanta police detective Jack Hale harbors a deep-seated distrust of psychics and ignores Katherine's warnings when she calls to report her premonition. Jack is forced to partner with Kate, who uses her eerie sensitivity to evil to help him catch a serial killer in Sydney, Australia, but that's only the beginning of the story. Jack and Kate are drawn into the investigation of a mystery surrounding Kate's birth and find murder and romance among a secret society of psychics in the quaint seaside spiritualist community of Casa Spirito, Florida.

What listeners say about Sixth Sense

Has potential, but relies a lot of clichés

When I say that ‘I want to like this book,’ it means that I wound up being disappointed. I went into the audio knowing it would be about psychics. I may not believe in much more than sensitives, but people who claim to have extrasensory perception fascinate me.

One of the so-called psychics doesn’t recognize a close family member but can call out and speak to the dead?

This was also a very disjointed book. Katherine – Crystal Ball Kate – shows up on the police precinct doorstep, claiming to be able to see an upcoming plane crash and that a movie actor’s son is going to die. Jack, the stereotypical jaded cop, doesn’t believe her. When the child dies in a plane crash, Jack is called on the carpet and is then forced to work with her. He is in charge of a serial killer investigation but has gotten nowhere. Kate has been having visions of the victims from these crimes.

Okay, this is a workable premise. But the reliance on clichés was irritating. Jack calls Kate a ‘hot piece of ass’. Chauvinistic, a little? His derogatory comments grow old very fast. He is angry with her because of something that happened in his past. He comments continuously about her physical appearance, and even when she provides information that was unknowable, he doesn’t stop the derogatory remarks. At one point, Kate passes out. A little melodramatic, but tied to her visions, so I’ll give the author leeway. But then Jack gives her CPR, including mouth-to-mouth? Do your homework. Police officers do receive some first-aid training. Even the greenest officer knows to check for a pulse. You don’t just start blowing in someone’s mouth. He panicked? I suppose…but he’s a cool-under-pressure cop.

The clichés just go on and on, including a ludicrous scene in the airplane. Kate is again ruminating about how scruffy and ugly Jack is, yet the hot flight attendant all but propositions Jack and Kate gets unreasonably jealous, even giving the flight attendant a nasty nickname.

I rolled my eyes.

And then, within a chapter or two, the main plotline was resolved. I was surprised and grateful, thinking I was finished. Oh, and letting Kate follow the police as they enter a potential crime scene where there might be a serial killer? Seriously?

Anyway, the book was not finished. Barely one-third done. Lots to go.

Now, I won’t give away too many details about what leads Kate into a new sequence of events and brings her into a new sphere of odd and ‘special’ people—more psychics and mediums. There is a scene that felt like it was never going to end because every other line was Jack making derisive comments.

There is a new villain who is so stereotypical that he was laughable. I’m not saying that multi-dimensional bad guys are required, but I wanted more than a cardboard cut-out. Supposedly he has all this magnetism that pulls women in, but that was incredible. As in – not credible.

Then that storyline was resolved.

I sighed with relief.

Only to find only another third was gone.

There is the requisite sex scene.

Kate looked down at him, her eyes wide and her mouth open. “How exactly is this going to work?” Kate stuttered, biting her bottom lip. “I mean you’re so…and I’m so…”
“Here,” Jack suggested, breaking out into a big grin. “Touch it, it’s not so bad. It won’t bite, but I might.”

And then it was ‘swollen to twice its normal size’. “Oh my God,” Katherine exclaimed.

But there are readers to whom this book will appeal. There are a series of mysteries to be solved. New relationships to be formed. Dead people to be contacted.

Between pink wedding gowns, séances, Romeo the Bichon Frise to go along with Juliet, and the emphasis that the people in Heaven are at their youngest and happiest, it made my head spin.

Now, I did personally relate to Kate’s search for the truth about the mystery surrounding her birth. That was a good subplot.

At the end of the book, there is a LONG explanation of the victims of a serial killer of co-eds in Florida. The graphic descriptions may be disturbing to some people. Appropriately, Katherine is shocked. Yet, she says, “I haven’t written my thank-you notes”, rather than moving toward solving the new case. This book is the first in a series and it will be interesting to see where the psychic and private investigator end up. I wasn’t surprised this was a set-up for a series. It felt like it was all over the place, but now the backstory is set up for the series.

Daniel V. Nobles was a good narrator. His deep voice was perfect for Jack. I wasn’t thrilled about his female voices, but he did okay with them. He certainly didn’t pull me out of the story.

Sixth Sense by Marilyn Baron is an interesting tale about a lady who has visions, and a jackass detective who thinks all psychics are quacks.

Both Cate and Jack deal with a lot on this journey to find a serial killer, but what makes the hard stuff better is how much they learn about themselves.

I gave this book 4 stars because everything moved really quickly, and while suspenseful the answers were always obvious. Along with that everything was solved so easy peasy and I found that to be a bit of a turn off.

As much as the above mentioned things bothered me, I find myself wanting the second book, to see where things go. I could easily be done after Sixth Sense because it snd ties up and pretty, but there’s another case to solve, and so much more Cate & Jack to explore!

Jack doesn't believe in psychics. he has a good reason to feel this way. When Kate calls in to report that a child will be killed in a plane crash he doesn't believe her and ignores the call. He finds himself having to escort Kate to Australia to find the serial killer he is working on.

Kate can hold her own against Jack and soon they work well together and things get steamy.

I liked both Jack and Kate. I felt Kate had a good depth of character. she was sweet, Naive yet tough enough to not let Jack walk on her.

There were many twists and it seemed there were a few short mysteries in the book instead of one. The story kept you on your toes.

I listened to the audio and found it entertaining, kept me engrossed wanting to keep listening and the narrator had a good voice and was able to make the ladies voice without sound silly.
if you are looking fro a good, steamy mystery suspense this is a great story.