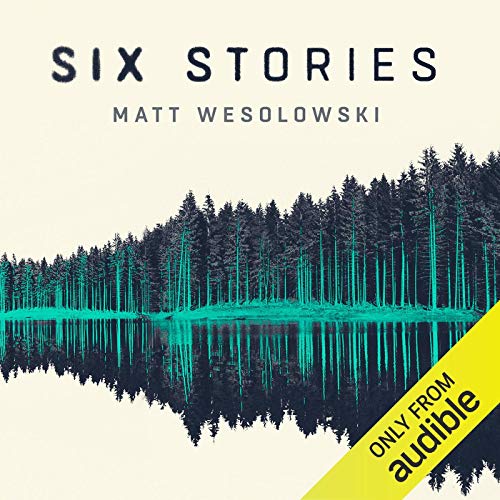 It's 1997. Scarclaw Fell. The body of teenager Tom Jeffries is found at an outward bound centre. Verdict? Misadventure. But not everyone is convinced. And the truth of what happened in the beautiful but eerie fell is locked in the memories of the tight-knit group of friends who took that fateful trip and the flimsy testimony of those living nearby.

It's 2017. Enter elusive investigative journalist Scott King, whose podcast examinations of complicated cases have rivalled the success of Serial, with his concealed identity making him a cult Internet figure.

What listeners say about Six Stories

I could hear every time it cut for an edit or something. The muffled bits didn't help.

The book, it's different, plot wise. The execution wasn't, not really a mystery type.Wasn' great and wasn't awful, just forgettable.

I could capture the surroundings and feelings by the vivid descriptions. The teens' attitudes through the interviews with them, now adults, sounded very real and intense. Great!

This one is difficult for me to review because I liked the last couple of chapters so much that it made the rest of the book better. It is totally intriguing, but slow for a while. I mean, I was totally interested and wanted to know, but it was not fast paced. Then the last sections were so good, I was absolutely loving it.
Also, I like the writer’s unique way of telling the story. I’ll definitely be reading his next book.

This book has been very cleverly written and listening to it as an audio book made it seem even more like the podcast that it was supposed to be. I'll certainly look forward to the next work by this author. The performances were excellent as well.

Six Stories is a series of six interviews with the now-grown teenagers who were at Scarclaw Fell the night Tom Jefferies died over twenty years ago. The interviews make up a series of six podcasts, aired online over six weeks. Each week, a different member of the original group of friends recalls what they can of that period of their lives, each one revealing a little more than the last.
Now, as I was saying before, this is the first audio book I have listened to with a cast, more than one narrator, in fact, there are EIGHT narrators!!! EIGHT!!!!!!! And they cover every word in the book as the whole script is told in the words of one of the characters!
What did I tell you? GENIUS!!!!!
Wesolowski has managed to combine literary brilliance with modern technology - what a fu*king achievement! Absolutely mind blowing!!! Honestly ... I could not stop listening to this, it was like having the movies in my ears for eight hours and eleven glorious minutes!!!! And trust me, glorious is the right word.
This is an absolute must listen to folks, it really is, and if you don't do audio books, go and get the book instead, you will not be disappointed at all! The cast are amazing, they captured the feel of the book perfectly. Just wonderful!
Well paced, thoroughly intriguing, and with a whole cast of unreliable witnesses, you are in for a belter of a story!!!

best not to try to resolve the mystery ...

Would you try another book written by Matt Wesolowski or narrated by the narrators?

Yes. The strengths outweighed the weaknesses for me.

Would you be willing to try another book from Matt Wesolowski? Why or why not?

Added some additional support to characterisation. The stories might well be weaker without these voices.

Was Six Stories worth the listening time?

The sixth story was a disappointment. I suspect that this was almost bound to be the case so long as the writer attempted to resolve the narrative with a solution. Interestingly this is exactly what the fictional blog caster promises not to do.

I suggest the author has a second stab at the final chapter but this time avoids the temptation to resolve the mystery. I'd pay to hear an alternative final chapter.

I'm not an internet podcast listener so don't know if the premise of this story goes on much but I really enjoyed this. If you don't know its akin to a series of separate interviews of a 'cold case' for listeners to digest. They aren't there to solve a crime and you don't hear from them - just those being interviews and the host. You become the listening fan base to make your own decisions in an old murder case, where new evidence presents itself.

I'm onto the second in the series at present (so the second audiobook 'Hydra' not chapter two in this one), and still think back to this. It's very clever in both the way its written and delivered in the story. How you can go back to what someone said after hearing new information.

Multiple narrators fit the medium well and helps express the story from different and perhaps contrasting or corroborating perspectives.

I hope there are more in the pipeline, as Hydra is currently even better.

An unusual and gripping book

I very much enjoyed this book. I had first tried to read it on the Kindle app, but found it a struggle. The audio version brings the story to life however. There are different narrators for the different characters and the performances are all very good. You can believe you are listening to a podcast, as the book intends.

Six stories is a set of six podcasts about the death of a fifteen year old boy. Each one focusses on a different character though there are others too. I can't say much more as I don't want to give anything away but there is a twist and all the way through I was wanting to know what would be revealed next

Not bad, not great

Not something I’d rush back to listen to again. The reviews, which are on the whole positive, convinced me to get the book, just didn’t live up to the glowing reviews I’d read.

Slow in the extreme

I quite like easy going, slow burn reads but the problem here is that it is Boring. I didn't get past chapter 2.

impossible to listen to

I can't think of anything else to write other than it was so badly written.

okay but probably should have read the book

this was okay. story was alright but it is supposed to be a "podcast". so hearing it read as an audiobook (ie word for word... no umms ahhs or other natural speach patterns) just highlights how far away from natural speach the dialogue is.

I purchased this on the back of reviews. I should have been more wary. It seems that some have fallen for the quirky format, which seems to have overshadowed the poor narrative; it was the same , years ago, with 'Cloud Atlas'. This is the second time I've been persuaded by reviews and regretted it because the text I've purchased is tedious.

Certainly an interesting format & intriguing story. Sadly massively let down by misogyny. A 14 year old girl doesn't "make love" with anyone: this is rape. A nice amount of victim-blaming as a corollory too.

Very subtle and believable characters..loved the interplay between 'interviewer' and characters. I will look out for this author again.