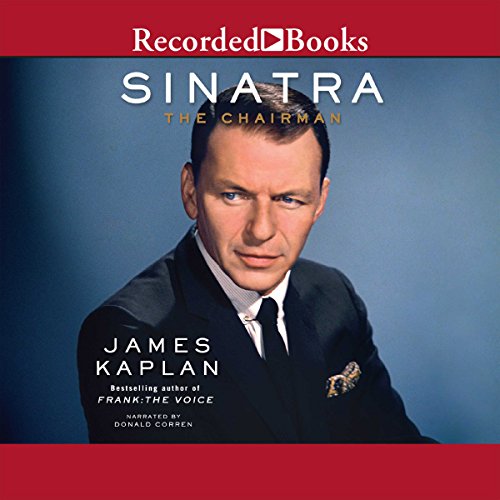 By: James Kaplan
Narrated by: Donald Corren
Try for $0.00

Just in time for the Chairman's centennial, the endlessly absorbing sequel to James Kaplan's best-selling Frank: The Voice - finally the definitive biography that Frank Sinatra, justly termed "The Entertainer of the Century", deserves and requires. Like Peter Guralnick on Elvis, Kaplan goes behind the legend to give us the man in full, in his many guises and aspects: peerless singer, (sometimes) powerful actor, business mogul, tireless lover, and associate of the powerful and infamous.

In 2010's Frank: The Voice, James Kaplan, in rich, distinctive, compulsively understandable prose, told the story of Frank Sinatra's meteroic rise to fame, subsequent failures, and reinvention as a star of the stage and screen. The story of "Ol' Blue Eyes" continues with Sinatra: The Chairman, picking up the day after Frank claimed his Academy Award in 1954 and had reestablished himself as the top recording artist in music. Frank's life post-Oscar was incredibly dense: In between recording albums and singles, he often shot four or five movies a year; did TV show and nightclub appearances; started his own label, Reprise; and juggled his considerable commercial ventures (movie production, the restaurant business, even prizefighter management) alongside his famous and sometimes notorious social activities and commitments.

What listeners say about Sinatra

Amazing, an excellent addition to Frank The Voice.

This is an excellent addition to the previous Frank The Voice. Kaplan's attention to detail is astounding and he ties Sinatra's life into relevant historical events very well. Truly the definitive Sinatra biography, an inspiring second book to an already inspiring first.

Terrific biography and fabulous audio voice. I read the previous book and loved it as well but this is the best book ever on Sinatra - both in terms of his biography and his music. Incredibly well researched. I will check other books by this reader as he added immensely to the overall experience,

What made the experience of listening to Sinatra the most enjoyable?

You are on the set of every movie and in the recording studio for every song ever recorded.

Nice perspective from family and friends and enemies. You get it all.

I loved all the scenes with his conductors. How the work was done in the studio was fascinating.

Frequently laughed throughout. Lots of head shaking with Frank's behavior. The ending chapters are pretty sad to listen to.

Always though his marriage to Barbara Marx was happy. I guess not. Lots of the Kitty Kelley stories are repeated in this volume but most are detailed with supplemental insights that change the perspective a bit. Not a flattering portrayal but a fascinating story.

This book is for those who want a lot of detail regarding Sinatra's life. Interesting, though plodding at times.

A bear of book to get through yet equally rewarding. I'm at a loss for words myself. If your a fan...you won't be disappointed.

After first listening to The Voice and loving it, I was a little disappointed to find that The Chairman used a different narrator. It did take some time to get used to but after a chapter or two I grew to love this one just as much. Such a thorough, fair, and well written biography. Together, both volumes give the listener the breadth and depth of Sinatra's life, and for the life he lived, that is truly a complement of high order.

What a Polarizing Entertainer and Character

After listening to Frank by James Kaplan I couldn't wait to dig into the conclusion of Frank's biography Sinatra. I have to admit I was a little put off that the narrator was changed, but after about five minutes I realized that Donald Corren's narration was superior and I thought was actually easier to listen to than was Rob Shapiro in Frank. The book was long but after finishing I thought the book was not nearly long enough. I think I enjoyed the second part of Frank's biography more just for the simple fact that the secondary characters were actually people that I'd heard of or actually remembered. When I finished the biography I was so moved I actually just sat in silence for a couple of minutes reflecting on what I'd just heard. Wow what a story!

Most detailed FRANK SINATRA bio ever!

I've read many Frank Sinatra books but this one is the best and most detailed by far. I also learned much about American culture through the years. Frank will always be my favorite crooner and entertainer. God bless him as he rests in peace.

recalled to mind with great nostalgia
a group of men and women that defined a generation of young and old. singers, song writers, musicians, actors, producers, directors all choreographed in the words and music of a gifted writer who retells a story already recorded in history. Done in a style without guile. Creates an intimacy with readers about a history and a time reminiscent of camelot its king and and loyal nights. if life imitates art, what an incredible pallette of color Frank Sinatra chose for the artform he embodied

The book is brilliantly written by a thorough and passionate, yet honest biographer. It's evident from the language used that there's a very deep love for the work of Sinatra, yet there's no effort sweep the sins of the star under the rug and pretend he was a saint either. This made the book enjoyable and credible. My only negative criticisms are the narrator of this book isn't very good. The narrator of the first volume of this book sounded almost like it was being read directly from the mind of Sinatra. The narrator of this book sounds like a cynical, at times bored bystander who always has his nose up at Frank, wagging his finger in disapproval. This takes you as a listener out of the story and filters it through a layer of what sounds like a disapproving gossip columnist from the old days. This narrator, Donald Corren, was not at all a good choice for Sinatra's story. One wonders why in the world he was chosen over his predecessor, who had done an incredible job of conveying Sinatra's life, loves and losses in a very passionate and immersive way. My only other criticism of the book is that the author essentially leap frogs over the latter quarter century of Sinatra's life. As a listener, you spend nearly 80 combined hours listening to the two volumes of Frank's life being thoroughly dissected in very detailed story telling that made his life feel very real, not just a prolific career. Then at the point of his short lived retirement, the last 25 years of his life is suddenly crammed, condensed, and minimized into two, hurried hours of listening. Yes, those 25 years may not have been nearly as climactic or turbulent as the first half a century, but there was plenty that would have been interesting to delve into. (The formation of his latter day albums, his involvement in the Reagan campaign, more about the battle between Barbara Marx and the Sinatra children, etc). But the author decided to very briefly skim passed all of this and rush to the end (albeit, a beautifully described ending). The latter 25 years of Frank's life wouldn't likely sell well enough to make it worth the authors time to have written a third volume of Sinatra biography, but as a Sinatra fan I was left dangling and feeling disappointed by the abrupt race to the finish. There was much left unchronicled. Otherwise, it's a terrific book. One of the greatest biographies I've ever listened to/read and I thank the author sincerely from taking the time and trouble to go to such great lengths to bring us this wonderful profile of the biggest and greatest star of the 20th century.