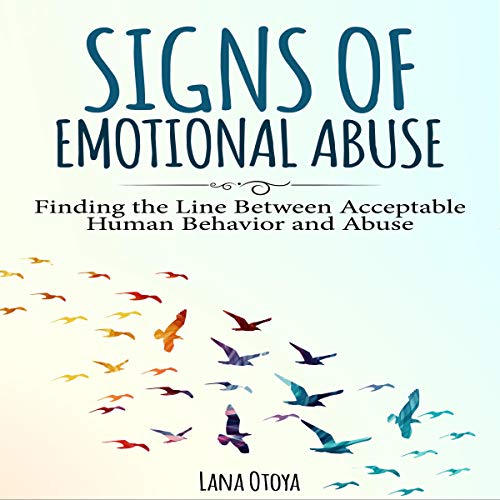 By: Lana Otoya
Narrated by: Jessica MacPherson
Try for $0.00

What is the line between emotional abuse and normal human behavior? And who gets the right to draw that line? Are you feeling depressed and anxious because your mental health simply isn't doing well right now? Or is it a direct response to the emotional trauma that is being caused by an unhealthy relationship?

These are all difficult questions to answer, and I understand how hard it can be to diagnose emotional abuse from the inside of a relationship. After having experienced an emotionally difficult relationship myself, I only came to truly realize how damaging it was after I had left the relationship. Why couldn't I see abuse while I was in the relationship?

Ever since then, I have seen many friends get very comfortable in relationships that last for years but that I would consider abusive. Why is it that so many people find their way into relationships like this? The answer is because it's nearly impossible to see abuse from the inside. I made it a mission of mine to find out exactly how to diagnose an abusive relationship from inside a relationship, so that anyone going through abuse or trauma can find a way out.

Abusive behavior can be hard to define or prove and many people think that abuse is an “opinion”. I know a couple where the man is emotionally abused by the woman. I have often heard his friends say things like “well if she makes him happy then it’s okay”, or “if he’s okay with it then I guess it’s alright.” If you were saying these things about your own relationship you might say “yeah, but I don’t mind it when he does that” or “but I know she doesn’t mean it that way”. You are saying these things as if abuse is an opinion-based thing when it really isn’t.

There is a line that changes things and moves behavior over into the abuse category and you do not get to determine where that line is. Abuse is not an opinion. This book will show you when behavior turns into abuse. The good news about abuse not being an opinion is that there is a line to be drawn, all you have to do is find that line - and that's where I come in.

What listeners say about Signs of Emotional Abuse

Must read for everyone not just couples..EV1

This book really covers the A-Z of all types of abuse in all types of relationships from domestic to parential, friends, family and work. This is the book you wish they had on the mandatory reading list instead of "catcher in the rye" our world would be a much better place. This is also one of few books that doesn't just knowledge bomb you, it gives you answered you will know by the end of reading this if you're in a abusive relationship and how to deal with it.