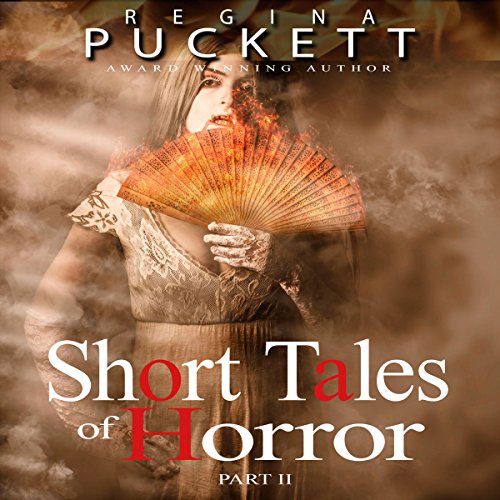 By: Regina Puckett
Narrated by: Maren McGuire
Free with a 30-day trial

While Sheriff Wilson has no idea what really transpired the night twelve people were murdered in the old mental hospital during what was supposed to be a simple night of ghost hunting, he was at the scene moments after the lone survivor committed suicide. Now it's a year later and a group of paranormal investigators want to set up a haunted house and invite the general public in that same abandoned mental hospital. How is he supposed to keep that many people safe from whoever or whatever killed the last group?

Gwen doesn't understand why her husband resents their newborn baby so much, but she never suspects that one day she'll return home from work to discover their baby boy has simply vanished. What happens next is the stuff of nightmares.

Thirteen black cats help keep watch over a bedridden, old lady. Sometimes the number thirteen is lucky but then again it might just depend on it who you are.

There's nothing usual about Jeremy waking up late for school, but on this particular morning something feels different. When he goes downstairs to face the music, he finds his grandmother waiting for him but no one else appears to be at home. Jeremy believes he's caught a lucky break and his mother and father won't get to know, but he soon discovers that not everything is as it seems. He finds he'll have to face up to his mistakes, though, and maybe even suffer a little payback himself.

Sandy loves her new boyfriend, but ever since they moved in together, Donald won't get off her back about how much she eats. When he offers her a new miracle diet pill, she decides to try one just to shut him up. Unfortunately, there are unexpected side effects that take them both by terrifying surprise.

What listeners say about Short Tales of Horror, Part 2

If you could sum up Short Tales of Horror, Part 2 in three words, what would they be?

What other book might you compare Short Tales of Horror, Part 2 to and why?

Jarrem Lee-Ghost Hunter, What the Dark Brings. Similarly in the suspense . Great short stories. Keeps you interested. Fun books to listen to.

I loved the performance she put feeling and attitude in the characters. Love the attitude.I would not change the title.

If you could rename Short Tales of Horror, Part 2, what would you call it?

Not a thing. Love the performance.

I would read more like this. Great books to play in the car for kids, not little kids, but those who never hush up. They really get into the shorts and they love the story's . It keeps them
Interested, and quite.

The narrator makes all the difference...

What would have made Short Tales of Horror, Part 2 better?

The stories themselves were good; predictable maybe but that's okay if they're told right! In this case, though, the stories got lost in the TERRIBLE narration. Maren McGuire did her best, but she stuttered words, her "character" voices were just sort of silly, and her pacing wasn't great.

These short stories were, again, fairly predictable but still fun.

Who would you have cast as narrator instead of Maren McGuire?

Again the stories weren't terrible...just read by an inappropriate narrator.