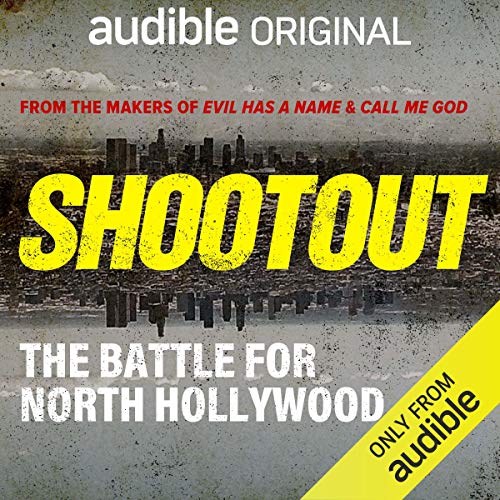 By: Grant Anderson,Peter McDonnell
Narrated by: Maureen O'Connell
Try for $0.00

One typical Friday morning in February 1997, two masked men dressed in body armor and carrying automatic rifles burst into the Bank of America in North Hollywood, California and started shooting.

They forced customers to the ground, stuffed hundreds of thousands of dollars into a duffel bag and exited out the back…where they were surrounded by police.

For the next 44 minutes, the armed robbers and police engaged in a deadly gunfight. News choppers overhead aired the North Hollywood shootout live on television. Down on the ground, both inside the bank and out, a neighborhood of strangers converged to stop the carnage and save lives. Many are telling their stories for the first time.

Peter McDonnell is a creator, producer, and writer of the Audible Original series Evil Has a Name, Call Me God, and Brooklyn North. He was a producer of the 2020 Netflix documentary series Pandemic and the NBC documentary series The Forgotten West Memphis Three. McDonnell runs the audio department at XG Productions. As a writer, he has reported on the environmental impact of cruise ships, Rachel Carson’s pioneering study on the harm of DDT, and Richard Byrd’s Antarctic survival for magazines including Outside. McDonnell is a graduate of New York University’s Tisch School of the Arts and has an MFA from Oregon State University. A native of St. Louis, he lives in Los Angeles with his wife Sarah and their son and daughter, Angus and Anna.

Grant Anderson has worked as a producer and creative executive on some of television’s most celebrated crime dramas of the past twenty years, including NCIS, NCIS: Los Angeles, Criminal Minds, CSI, CSI: Miami, CSI: New York, and Third Watch. He began his career working in production on television series at Lorimar and Warner Bros. and was a member of the original team behind the global television hit ER. Grant runs the scripted film and television division at XG Productions. Originally from the Bay Area, he grew up in southern California and studied Television and Film at California State University Fullerton. Grant lives in Los Angeles with his wife Jacque and their son and daughter, Henry and Samantha.
Writers: Grant Anderson and Peter McDonnell
Performer: Maureen O’Connell
Executive Produced and Edited by Peter McDonnell and Grant Anderson
Senior Producer: Francey Hakes
Story Producer: Marie Giorda
Dialogue Editing, Sound Design, and Mix by Matt Gurgol
Produced by XG Productions
Executive Producers for XG Productions: Jim Clemente, Spencer Gordon, and Peter Clemente

Maureen O'Connell was an FBI Special Agent for 25 years and investigated hundreds of violent crimes. For 20 years, she was also a member of the FBI's Evidence Response Team and traveled extensively to collect clues at crime scenes around the globe. Today, O'Connell runs her own consulting and security company in Los Angeles. As a longtime singer and student of opera, she is drawn to all types of vocal performances, including audiobooks. In 2019, she narrated her first audiobook, the Audible Original Call Me God.
ORIGINALS

True-crime stories examine the ills of our society. Here are four of the best true-crime audiobooks to learn from.

What listeners say about Shootout

The full story of a violent bank robbery is told, minute-by-minute, through the eyes of the people in the bank, the police officers responding, police dispatch and those witnessing events outside the bank. Fear, pain, adrenaline come through in their voices. Outstanding podcast series.

An emotional, action-packed series that brings together the stories of those centrally involved in this dramatic incident. Listened straight through, kept my attention throughout

I remember watching this happen live. Two men robbed a Bank of America in North Hollywood, California. They carried AK-47s and had more firepower than the LAPD at the time. It resulted in a number of officer injuries and a brave dentist and his wife treated several, saving their lives. This account is told by various people who were there and are still with us (some are not), officers, wives, the heroic dentist and the dispatcher. Gripping, thrilling and heartbreaking, a must listen for true crime fans.

Very pleased, this was an excellent oral history of the event. Very good sequencing and ordering of the testimony

This story has me on the edge of my seat (metaphorically). I sort of knew what happened-- I remember watching the news-- but I didn't know all of the details.

Lots of interviews with key participants in the event. It's a very dramatic story, but the producers didn't try to up the drama. Still-- so many heroes that day, and not all in uniforms.

This was so well done. I barely remember the robbery. Had no idea it was that bad. Really well done.

Quite riveting & very moving...I lived in The Valley for 11 years and could easily visualize all the locations.

I could not turn it off! I listened while I was walking and had to listen til the end. it drew me in!

Another brave and emotional true crime interview with the victim. I know how painful to remember the incident, the fear of uncontrollable battle you've been through. I can feel your emotions and thanks God, you're safe and I am so proud for the courage to share your personal stories to us. I know it's not easy.