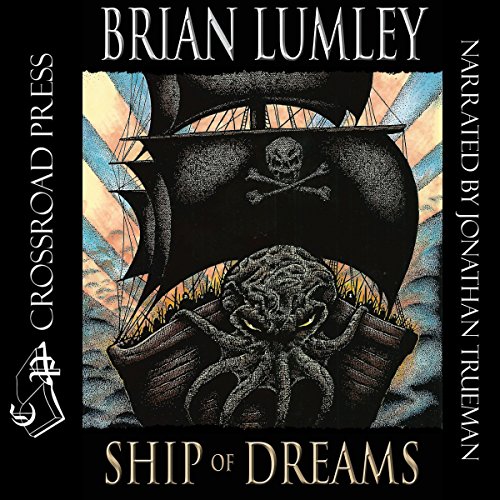 By: Brian Lumley
Narrated by: Jonathan Trueman
Try for $0.00

Once David Hero was an ordinary man living in the real world. Now he is trapped in the Dreamlands, cut off from the waking world. David Hero's dreams and nightmares have become his only reality.

Led by wickedly beautiful Queen Zura, the zombie armies of the dead are on the march. They will destroy the beautiful Dreamlands, making them a permanent, deadly nightmare.

Unaware of the marauding zombies, David Hero and his friend Eldin voyage through the clouds in a wondrous skyship. Their journey is interrupted by a pack of faceless nightgaunts, terrifying creatures, half-man and half-bat - and all evil!

David Hero is one of Zura's first targets. As a man of the waking world, he can withstand her terrible seductive power and shatter her shambling armies. David Hero must be the first Dreamlands hero to die.

What listeners say about Ship of Dreams

Brian Lumley's Dreamlands series is very much a change of pace to most of his other work. While Necroscope and the Titus Crow books are full-on horror, the books featuring David Hero and Eldin the Wanderer are old-school 80s fantasy set in H. P. Lovecraft's Dreamlands.
Ship of Dreams is fun and fast-paced with lots of silly humour from the lead characters. As with all Lumley stories it's well written and never dull.
Jonathan Trueman's narration works really well for this series and he does a great job differentiating the character again.
Top quality presentation from Crossroad Press.
Recommended.

A Land of Dreams & Nightmares

Loved it, although it's not Brian Lumleys best book, it made for an exciting story
Most memorable moment had to be the Zombie Queen, beautiful & deadly.
it was brought vividly to life by the Narrator, who feel did some interesting voices, that fit well with the characters.

Another great book in Brian Lumley's Dreamlands series. Ideally these books should be listened to before the culmination of the main Titus Crow finale Elysia. Lots of daring-do and a few laughs along the way, all within the weirdness of Lovecraft's Dreamlands.