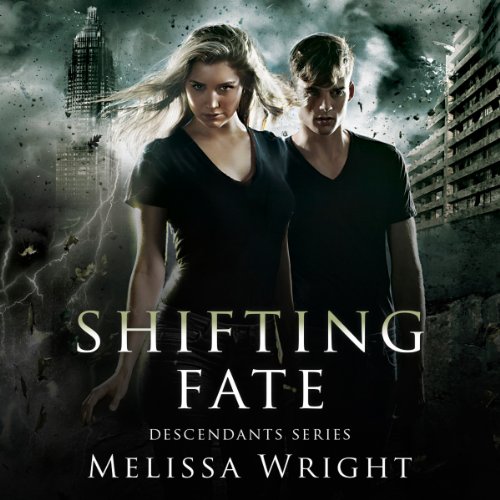 By: Melissa Wright
Narrated by: Emily Rankin
Try for $0.00

According to prophecy, Brianna Drake was born to save the world. The trouble is, she doesn't have the slightest idea how. Her visions should have given her the answer, but they’re beginning to shift, making the danger too unpredictable, even for a prophet.

If she can just help her sister restore their hidden powers, she might be able to stop what’s coming. But an old enemy returns, and he’s got plans for Brianna and her visions.

What neither of them knows is that fate has given a stranger one chance to find her. He was trained to protect the chosen - but if he fails, the future will crumble.

What listeners say about Shifting Fate

This was a bit of an odd experience for me. I’ve never before listened to an audio book (and though you can’t see it, I very nearly wrote “read” there). I was a little hesitant to try one out to be honest. Listening to a book is very different than reading one. I’m used to my internal voice. I know how I will narrate certain phrases and interpret actions—but when it’s someone else’s voice, someone else’s interpretation, there’s a large chance that my internal voice isn’t going to match up with theirs. So let’s take a minute to talk about the narrator.

The Audible Edition of Shifting Fate was narrated by Emily Rankin. My initial reaction was that her voice was too old, too sultry for the POV of a teenage/young adult heroine. (Not to mention how absurd her very feminine voice sounded as she tried to deepen it… without success… to speak for the male characters of the story.) It threw me for a bit of a loop to begin with. I think she did a decent job of narrating the text, and I got used to it after awhile, but my internal voice didn’t match hers at all. I found myself running through the sentences of the book in my head after she said them, rearranging them to fit my own internal narrator… and it was a bit distracting. that’s not her fault, but it needs be mentioned. I hesitate to say it, but I’m not certain hers was the best voice to use for the POV of Brianna.

That aside, I loved the book—even more so than the first in the series, Bound By Prophecy. I went into this story not expecting to follow a different set of characters from the first book, but glad when I found that it did. Brianna seemed more substantial in the second book of the series, and I think I got better idea of her character. In the first book she seemed weak, frail. That wasn’t so in Shifting Fate. She was an interesting character, shoved into an unwanted spotlight and forced to keep secrets from her twin sister, and the man she loved. It was an impossible position, and every moment she was in very real danger… but she didn’t break down, whine, or get angry. She sucked it up and did her best to make whatever situation she was in, the best option it could be.

As for the romance aspect of the story, can I just say: Swoon~. As the book started I was certain that Brianna was going to end up in a relationship with Brendan—who, may I add, came across as less of a jerk as the book started. Then, just as I was getting comfortable with the idea of the two as a couple, BAM, Logan arrived, and as far as I was concerned, Brendan was thrown out the window. It was odd, I’ll admit. I’d almost expected a love-triangle to pop up between Logan, Brianna, and Brendan, but it didn’t really turn out that way. It struck me as strange that the opportunity was passed over, but in the end it didn’t matter. The relationship between Brianna and Logan was delicious. The two had a dynamic that was both engaging and entertaining. I think they were both trouble makers in some sense, and so they played off each other throughout the story in ways that made me giggle. In the first book, Emily and Aern had a relationship that was genuine but a bit understated. They fell in love slowly and surely until it simply, was. With Brianna and Logan, it was a different story. From the outset there was passion and lust between the two, and it became more and more severe (and awkward) as the story went on until finally it exploded, and the two could hardly be separated. In a funny way, Brianna, the meeker of the sister, had a more passionate relationship than her warrior sister. It fit, and I think in the end, made for a stronger book.

Now, like the first book, there was a bit of a drawback. As with the previous book, the world building made me want to throw my hands up in the air. Again, it was vague. The author never explained exactly who or what the seven lines were, or what the shadows were. It was frustrating. You’d think that this far into the series, there’d be some backstory… some explanation of the paranormal bits of the story, but there was nothing. Not a single concrete line filling us in on who or what these people were or their role in the world. I was able to ignore it for the most part, and I enjoyed the story immensely (so I didn’t subtract a star) but it was both distracting and irritating. I can’t fathom why the author chose not to divulge this information.

Overall, I loved the book, and so far, I’ve really enjoyed the series. I’d be happy to recommend this to anyone who likes YA/New Adult paranormal romance, and I’m going to keep an eye out for the next book in the series. I’d certainly read/listen to it again.