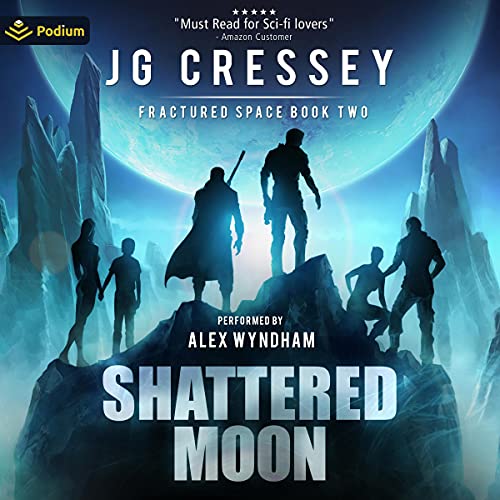 The saga of Cal Harper and the crew of the Star Splinter continues....

After eight desperate months of searching, Cal Harper and his crew still haven't discovered Kaia's whereabouts. Taken by pirates during the rescue of Federation survivors, her fate remains uncertain. But so too is the fate of humanity itself.

With the destruction of Earth, the Insidions have struck a devastating blow only to sink back into the shadows to let the poison spread. Thousands of colonies have been forced into self-sufficiency, and the loss of interstellar communications is making the situation infinitely worse.

Riding on the building chaos, the pirates are proving increasingly organized. So much so that Cal fears a leader may have arisen - one powerful enough to unite the disparate clans. But Cal isn't about to give up his search, not by a long shot, and his crew are sticking with him every step of the way.

But trouble is brewing in ways few could have predicted, and fortunately or not, Cal and his friends have a talent for finding the worst of it.

What listeners say about Shattered Moon

Alex Wyndham brings every character to life. I follow his choices of books to narrate and have discovered wonderful New author's and stories series.

Honestly this was kind of boring and frustrating. If I wanted to listen to an entire work consisting of heros making no real plans and then getting their asses kicked I could just watch the first x-men movie. And what is the deal with all the "bitch" usage? It's a departure from the first book, where there's at least some indication that the author knows women can be something other than victims or assholes.

I dunno who hurt you dude but you gotta get over that.

The writing is solid and the performance is good, but for goodness sake, your protagonist is a hero, and a good man. Good men don't think like this.

So many wonderful characters and worlds.

Cal and his brilliant crew search the many dangerous pirate worlds looking for Kaia. They finally get good Intel where to search for her. The build-up towards the finale is amazing. At no time is there true confidence that they will be successful. Quite a few surprises, lots of exciting action, every character really rises to excellence.

Another great addition to the series.

When a book pulls me in and I’m immersed in the world created, I give it 5 stars. Thankfully I ignored the negative reviews and approached this second instalment with an open mind. I wasn’t disappointed. J. G. Cressey and Alex Wyndham are a great team.

This was a good book with good narration. It was not as good as the first only because it seemed to wonder off course at times.

Great series with so much action. It’s action packed with fun characters. The main character is a hero.

Thank you for this great sequel. I have checked often for the continuing saga of these great characters. I hope the next book comes sooner. Narrator is perfect again and enjoyed getting to know more about each character.

Book #2 in the series

What made the experience of listening to Shattered Moon the most enjoyable?

If you’ve listened to books by J.G. Cressey before, how does this one compare?

I absolutely loved book #1 Star Splinter. I enjoyed listening to this audiobook (Shattered Moon). However, everything in this book seems a bit contrived. The characters are always getting into extremely "hopeless and impossible" situations, and then at the "final" second are magically getting out of the situations. Don't get me wrong, I still enjoy listening to the story, and will definitely get the next audiobook in the series.

What does Alex Wyndham bring to the story that you wouldn’t experience if you just read the book?

I can listen to his voice in narrations and characterizations forever. He does such a good job in flushing out each characters voice you can form a picture in your mind on how they look and act.

I really can't see this book being made into a movie without it being completely destroyed. Now, if they made a completely CGI movie with voice-overs, that might work. But with live actors playing against green/blue screens...not so much.

Can't wait for the next installment!!