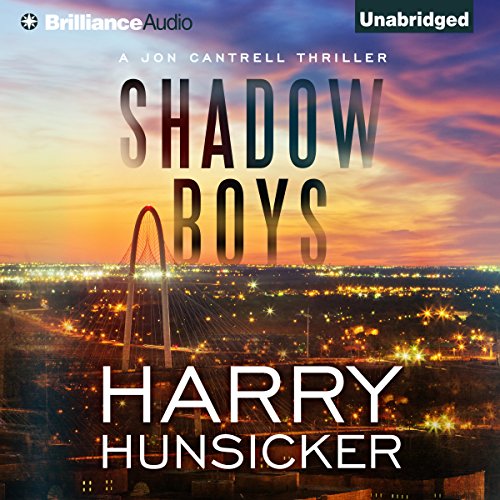 By: Harry Hunsicker
Narrated by: Luke Daniels
Try for $0.00

For once, things are going well for former DEA contractor Jon Cantrell. He's got a real job as a fix-it man for a law firm that specializes in handling government contracts. But when his ex-girlfriend Piper asks him to meet with a high-ranking police official and Cantrell is forced to take an off-the-books assignment to find a missing boy, everything starts to unravel.

Not helping the situation is his client, Deputy Chief Raul Delgado, an up-and-coming politico carrying his own tragic burdens he doesn't like to dwell on. Forty years earlier, a racist cop brutally killed Delgado's brother. Now, in a weird twist of fate, Delgado works for the very department that altered his life.

As Cantrell proceeds, he uncovers a puzzling link between Delgado, the missing boy, and a series of vigilante murders. As the link becomes clearer, Cantrell struggles to stay alive and find the missing child.

What listeners say about Shadow Boys

I would guess that the negative reviews for this book come mostly from those who haven't read or listened to The Contractors, the first book in this series.

An understanding of John and Piper's relationship is pretty foundational to the story. This book carries forward the theme of two people with damaged pasts trying to get along.

The story was good. I listened to this book, and I have to say Luke Daniels is a master at reading these stories. No confusion about who is speaking. He is a treasure.