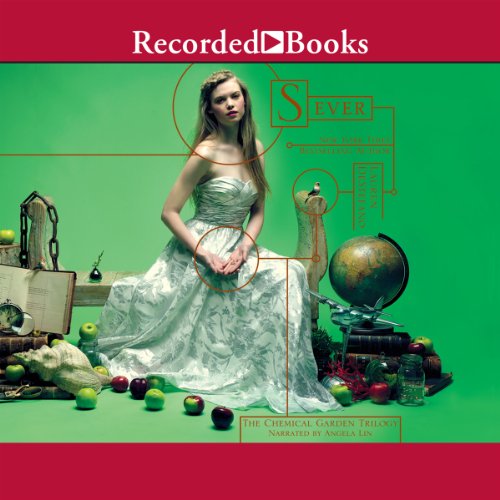 By: Lauren DeStefano
Narrated by: Angela Lin
Try for $0.00

Lauren DeStefano’s New York Times best-selling Chemical Garden trilogy has drawn immense praise from an ever-growing fan base. In the saga’s chilling conclusion, Rhine’s race against time brings her to Vaughn’s eccentric brother, Reed. Elsewhere, Rowan’s involvement in the underground resistance reaches dangerous new heights. When Rhine’s search for answers finally comes to an end, the truth about her past will forever change her view of the future.

What listeners say about Sever

This final entry in the Chemical Garden trilogy finds Rhine upstairs once again in the mansion with sister wife, Cecily and husband, Linden. Desperate to find her brother, Rowen, Rhine teams up on her quest, meeting old "friends," typing up loose ends, and answering lingering questions.

DeStefano has breathed more life and emotion into each character making them more relatable and I found myself rooting for those I previously felt indifferent about. Bratty Cecily matures into a caring, thoughtful young woman; Linden becomes his own man, wriggling out from under his father's thumb; Rhine shares more of her inner thoughts and desires; and Vaughan shows myriad emotions (no spoiler alerts from me). There are gasp-worthy moments and the ending is satisfying and well done.

As one of the better YA writers, Lauren DeStefano creates an interesting premise, close to Atwood's, "The Handmaid's Tale." She imagines a haunting, eerie, yet hopeful world where the characters fight to live, find meaning, and fulfill their dreams. There's more depth and danger in her books. Truly a wonderful trilogy and wonder why it doesn't get more attention than some of the Twilight Copycats?

Stressful ending but a great story

This was an excellent story. It didn't have the ending that I wanted, but it was a proper ending and I can respect it.

This is a slow moving story but I loved how the characters evolved over time. There were a few twists and turns along the way so I was never bored during the story. Easy read and I never wanted to put the book down. I was so sad when the series was over, highly recommend this book if you typically like Dystopias! Kind of reminded me of the Hunger Games because its set in the future of America which has changed dramatically and has basically crumbled.

I feel like it's a brilliant story. I'm not sure why it's gotten so many negative reviews. It has a poetic vibe to it that I love and is very creative. There are small parts that could have been written better but overall I love it. My only real issue is how much Rhine blames herself for deceiving Lenden. Like come on girl you had every right to do what you did. I suppose I just wish she let him and his father know what they did to her and the other girls a little more instead of being so sorry all the time. Even with that it's a great story.

The story wrapped up so well. This is one of my favorite series. Makes you appreciate life a little more.

If the author could fill up more empty space in the story by reiterating everything that happened in the first book, I'd be shocked. There's startlingly little character development, and the repetition is enough to make me bang my head against the wall. I listened to the end, but just barely.

A beautiful finished to a brilliant series

Once again DeStefano's beautiful turn a phrase make this book a joy to read. I thought the ending was very fitting and very true to the story, despite being somewhat melancholy.

I loved the characters in it and each of their stories. it was a little slow in parts but, I liked the story.

The last book was not as good as the other 2.

I struggled to finish this book. Too drawn out. The series could have been wrapped up nicely in 2 books.

Would you try another book from Lauren DeStefano and/or Angela Lin?

No, I gave this trilogy a full read and found nothing redeeming, not the characters, plot or the bland nonsensical world it took place in. The rules of the world flip flop and things happen with no input or reactions from the creepily one dimensional main characters.

What was most disappointing about Lauren DeStefano’s story?

The characters. I can't believe in this day and age a woman would write a female character so disgustingly placid. The main character floats around waiting for things to happen to her surrounded by murders, kidnappers, rapists and worse for whom her only interactions are to be apologetic. Worse these men are treated as love interests. Quite frankly I don't think any young impressionable girl or boy should read this. If I were abducted by a man I certainly would try everything on my power including lying to him to escape without a hint or remorse or regret.

Would you listen to another book narrated by Angela Lin?

Yes, she did as a good a job as possible with a boring, nonsensical and poorly written story.

If you could play editor, what scene or scenes would you have cut from Sever?

Anything in which Cicely was not involved as she is the only character that made any sense. While she wasn't exactly lovable at least she was somewhat believable.

This story and its characters make very little sense unless you are the type of person who believes that women should behave like a Barbara Cartland heroine.