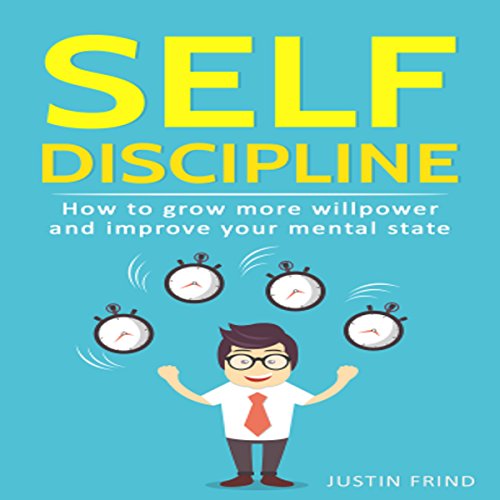 Self Discipline: How to Grow More Willpower and Improve Your Mental State

Self Discipline: How to Grow More Willpower and Improve Your Mental State

Have you ever had a goal that you tried to accomplish but wound up failing for reasons you couldn’t comprehend?

Did you have the motivation to attack this goal only to lose that motivation almost as quickly as it appeared?

Well, I want to tell you that you are not in the minority of folks who have had trouble getting started attaining their goals. All over the world, there are people who have the desire to better their lives but just can’t seem to find the needed ingredient to go out and make it happen. No matter what you want - if it’s to be healthier, wealthier, or happier - your failure to achieve these things most likely didn’t come about because of who you are; they happened because you lacked the necessary self-discipline skills to follow through.

In this book, you will learn how to do away with that troublesome motivation that makes you think you’re on your way to success, so that you can replace it with earned self-discipline that will allow you to finally pinpoint, flesh out, and follow through with whatever it is you want to accomplish!

Before listening to this audiobook, however, you should know that this isn’t your average self-help audiobook because it isn’t going to make a bunch of empty promises about finding success quickly and easily. Self-discipline isn’t something that you can buy, and it isn’t something you can have handed to you. It’s something that comes from within you that can only be built and maintained by you. So, if you’ve had enough of the false starts and goals that just didn’t seem to pan out, I urge you to listen to this audiobook and, ultimately, yourself. Because through self-reflection, and honest, hard work, your reality can go from concrete to putty in your hands!