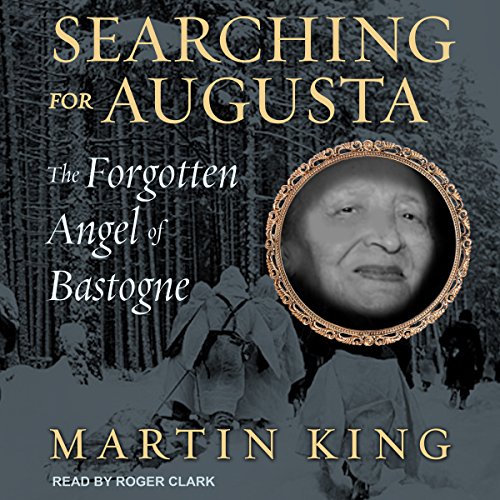 The Forgotten Angel of Bastogne
By: Martin King
Narrated by: Roger Clark
Length: 6 hrs and 40 mins
Categories: History, Military
3.5 out of 5 stars 3.7 (3 ratings)

A brutal siege. A forgotten heroine. A war-torn romance. And a historian determined to uncover the truth.

Untold millions who saw Band of Brothers can finally know the whole story of what happened to American soldiers and civilians in Bastogne during that arduous Winter of 1944/45.

In the television version of Band of Brothers, a passing reference is made to an African nurse assisting in an aid station in Bastogne. When military historian Martin King watched the episode, he had to know who that woman was; thus began a multi-year odyssey that revealed the horror of a town under siege as well as an improbable love story between a white Army medic, Jack Prior, and his black nurse, Augusta Chiwy, as they saved countless lives while under constant bombardment.

Based on the recent discovery of Prior's diary as well as an exhaustive and occasionally futile search for Augusta herself, King was at last able to bring belated recognition of Augusta's incredible story by both the US Army and Belgian government shortly before she died.

This is not only a little-known story of the Battle of the Bulge, but also the author's own relentless mission to locate Augusta and bestow upon her the honors she so richly deserved.