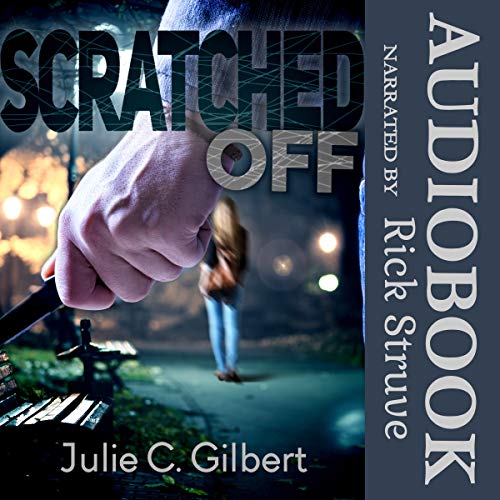 “The Big One” could make Sam's career or...break him.

FBI Special Agent Samuel Kerman has been tasked to catch a wildly erratic serial killer dropping bodies in Pennsylvania state parks. The victims differ, and the manner of murder changes every time. Amid the mountains of physical evidence, only a mysterious gray dust and declarations of guilt or innocence link the crimes.

It's not much to work with, and the case drags on for months. Then, things go from bad to worse when the killer makes it personal. Family, friends, strangers...everybody's in danger of being scratched off.

What listeners say about Scratched Off

This was a Pleasant surprise as I usually read more extreme horror/thrillers
A well written detective novel that doesn’t rely on violence,sex or profanity opening it to a wider audience
Great narration and twist ending highly recommended
I received a free review audiobook and voluntarily left this review

I found the story well written and actually enjoyed herding the murderer's thoughts and how his logic determined what he would do. I felt the characters were well thought out and realistic.
#tagsgiving #sweepstakes

Scratched Off is a stand alone psychological thriller by Julie C. Gilbert. I’ll be honest, when Chapter 1 clearly stated who the serial killer was, by name, I was really worried that this wouldn’t be a mystery or very suspenseful. I was wrong. So, so, wrong.

Instead – regularly hearing Andrew’s thoughts and plans juxtaposed with the victims’ and other character’s in the story created an almost constant tension while listening. The closed door romance between Andrew’s sister, Melissa and FBI Agent Sam Kerman added another level of depth to the story – but in very unpredictable ways.

Like most good mystery/thriller books – it’s hard to share what I enjoyed about it without giving anything away. The most descriptive praise I can give is that it was full of surprises and I truly enjoyed listening from beginning to end. I’m looking forward to checking out more of Gilbert’s work.

Content Note: While the romance is closed door and there is no explicit language, this is a book about a serial killer and some of his killings and their aftermath are described in detail.

Narration:
This was also my first experience listening to Rick Struve. He did a fantastic job with a variety of voices, personalities, and emotions. I felt completely drawn into Gilbert’s writing and truly enjoyed his performance.

Disclaimer note: I know we’re supposed to mention if we received an audiobook for free. For whatever reason, I didn’t make a note about where/why I picked this book (I’m getting better, but have been inconsistent in the past). I *think* it may have been a giveaway in a FB group. So… like everything else, this is my honest review whether or not I received it for free. I did borrow the ebook version via KU to make it easier to take notes.

This one kept me on my toes.The main characters are an FBI agent and a serial killer. Will the agent be able to stop the killer before it becomes personal? You will have to check out a copy and find out. No spoilers here. I recommend this book. I chose the audio book which made it even more chilling listening to the narrators voice added to the suspense and tense moments.

The Suspense has you on the edge of your chair.

The story line keeps you engaged and has a surprise at the end. (No reveals) The narrator draws you in and keeps you involved. This book was not part of a series but Julie Gilbert does have two series in different genres. I did receive a free copy of this book from Audiobooks Unleashed and have found a new author to follow.

Multi scenes, switching from killer's viewpoint to that of the agent working the case, which gives very different perspective of the killing, and the motivation behind them.
This story deals with a relationship perspective, where the killer is known to multiple people, who also have different relationships with one and other. A very interwoven story, and even a surprise at the end, that I believe none would have seen coming.
The narrator does a fantastic job, with varied vocalizations for different characters. It adds another dimension to the overall experience.

I was given an ARC audiobook to listen to and am voluntarily leaving a review.
Wow, what a story! The narrator did an awesome job with the delivery. I am just getting into psychological thrillers and this is the first time for me with this author. She really had me hooked! The story is told as 3 different storylines Andrew the serial killer, Sam the FBI agent, and Mel, Andrew's sister and Sam's love interest. It was fascinating to get inside the killer's mind and see what he's thinking and feeling. Very chilling! I also liked the fact that sex and profanity did not play a role in creating a good story. There were so many twists and turns and a big reveal at the end. It was so full of suspense, it kept me at the edge of my seat the whole time. And the title makes so much sense after listening! I definitely recommend this book. I am looking forward to trying other books by this author as her writing style was very well done.

Both the author and narrator were new to me but I thought they did an AMAZING job. The narrator was able to capture each and every character and gave them their own identity and I really love that. I definitely will look for other books written by this author for I definitely loved her way of writing. I know others would feel the same way as I do so, I definitely recommend this novel.

Three storylines from the serial killer the FBI agent and the Doctor. What was the motive behind these three and was there any connection to the killings. Fast paced and the clues and this concept of three views was intriguing. Different from other books I have read by her and good. Given ARC audio and the narration was good, for my voluntary review and my honest opinion

A suspense filled thriller that has some twists you won't see coming. The narrator did a great job bringing the story and characters to life. I look forward to more from this author.


I was engrossed by the suspense in this book from the first chapter . The ending took me by surprise. Julie C. Gilbert does a great job of balancing the stories.

well another fantastic audiobook from the pen of Julie C Gilbert and narrated by Steve Struve. if you're wanting a great book look no further xxxx

I really enjoyed this book. I thought the plot was cleverly written giving both the detectives point of view and the crazy world of the killer, and it was enough of each to keep you hooked and listening for more. The blurb did have me wondering if it was going to be just a detective story or if it would have a touch of science fiction in it but as you listen the grey dust is easily explained and is a clever plot twist (there is no sci-fi, the bodies don't disappear leaving behind grey dust). A number of people died in some gruesome ways and although you knew how the story didn't go into a lot of gruesome details, just left it up to you to imagine, if you wanted to.
Bodies are being left in parks, with nothing connecting them or linking them like race, gender, age, rich, poor nothing seems to matters to this equal opportunities killer. The FBI calls in special agent Samuel Kerman to investigate and the only clue they have is a grey dust found on the bodies. Tracking down the dust proves to be more elusive than catching the killer. Until Sam's girlfriend provides a vital clue as to the origin of the grey powder and then all bets are off. And a game of cat and mouse ensures but Sam and his team must be careful that they don't become the hunted.
I liked the narrator and thought he did a good job with all the characters building up the tension and emotion.