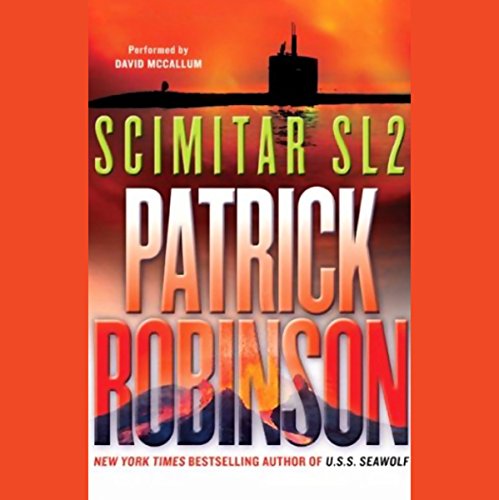 By: Patrick Robinson
Narrated by: David McCallum
Try for $0.00

Amid the Canary Islands lies the massive crater of the volcano Cumbre Vieja. Scientists theorize that one day the volcano will erupt, triggering a series of events that would lead to a tsunami wave higher than any in recorded history. This mega-tsunami, with waves of more than 150 feet in height, would ravage Europe, Africa, and ultimately the East Coast of the United States, causing immeasurable loss of life and destruction.

It is discovered that Ravi Rashood, America's nemesis, the former SAS officer who is now the head of Hamas, has hatched a diabolical plot against the West: to fire a nuclear-headed guided cruise missile, Scimitar SL-2, named for the curved sword of the Muslim warrior Saladin, into Cumbre Vieja.

As the terrorists' deadline approaches, Morgan and his team must consider the unthinkable and assume the daunting task of organizing the mass relocation of major population centers along the East Coast to safer ground.

Morgan finds himself battling his greatest enemy yet, racing against time to locate Rashood, the silent, underwater marauder, and stop him before the unimaginable occurs.

"Robinson's full-bodied, measured prose has a retro feel, and his narrative, studded with informative historical and political tidbits, turns every new setting into its own short story." (Publishers Weekly)

What listeners say about Scimitar SL-2

This had potential to be an excellent story but failed to be really that good. Characters were rather poorly developed, plot got a little thin at times. What really detracted from the story was the gaps. Maybe it got cut when abridged (that is why I prefer unabridged), or maybe left out. But there are huge gaps in the story and it takes several minutes to figure that out.

what Tom Clancy use to be

I have read many other books by Patrick Robinson, and would like to hear more by this author. The Scimitar 12 was unbelievable in it?s timing of would events. The down side is that I felt shorted as this was not the unabridged version. I like the way he play?s the character against one another, and in this version some of that is missing. This is a good intro into Patrick Robinsons work, and I hope that audible would get the rest of his works , only in the unabridged version.

Abridged version does not do the plot justice

A non-abridged version would spare many of the inexplicable plot holes and jumps. Everything moved much too quickly, contrary to Robinson's detailed plots.

Leave it whole and Bring back George Guidall.

Suspect the unabridged version would make the sequence of events more plausible and real.

this was the most pitifal military thriller EVER

the writer must have run out of inspiration when he wrote this military non thriller
the ONLY redeeming quality about this book was the narrator. it was strained writing, ludicrous story line, too much logistics and hardware specs with way too little actual story or action. oh, and as predictable as they come. BORING!

...and then a miracle happened.

Robinson appears to be suffering from the Ludlum syndrome. He's trying to "top" his excellent earlier works by being more far fetched and imaginative. The trouble is that he has lost touch with reality. His hero swiftly and easily seizes control of the U.S. government, then in two weeks manages an evacuation of the East coast. Even if we had all of the omitted parts of this dreadfully abridged work, it's difficult to imagine that he could have made it credible. It's a shame. Robinson's first four best sellers were superb. Nothing recedes like success.

The story line was great. Fast paced and very descriptive. However, the short ending left me feeling cheated. I kept looking for another disc. What happened to the thrill of the chase.

Admiral Morgan is a great charactor and is voiced better by George Guidell (sp?). The abridgment was truly awful.

This is a fun disaster novel but the political perspective is abhorrent and simplistic—-an American Coup —-really !

The first four novels in this series had some serious flaws, but were also immensely entertaining. This one is just plain stupid. It is like a 1970s James Bond movie. I am going to return it and get my credit back. What an unbelievable stinker! I cannot recommend reading this title, however if you have read it, and find it wonderful, then please admit your stunning, wilful ignorance/delusional state and abstain from voting.