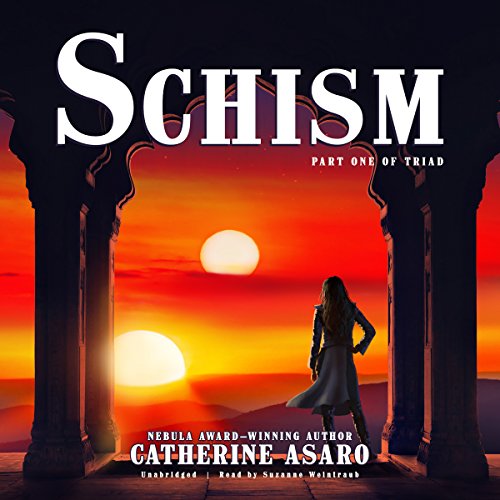 By: Catherine Asaro
Narrated by: Suzanne Weintraub
Try for $0.00

Schism (Triad, Book I) is the tenth novel in Catherine Asaro's multiple-award-winning Skolian saga, and represents an excellent entry point into the series. An epic story of how the Ruby Dynasty reached maturity, Triad, divided into two books, reveals how a war of galactic proportions first explodes between two great empires.

Schism is how it all began, harkening back to the early years of the Skolian Empire, back to the beginning of the war between Skolia and the Euban Traders. Twenty-three years have passed since the fateful vote in the Skolian Assembly that Roca missed in Skyfall. It created the first open hostility between Eube and Skolia, which has only deepened in the ensuing years.

Now Eube senses an opportunity, for strife has riven the first family of the Skolian Empire. Sauscony, the daughter of Roca and Eldrinson, is ready to seek her fortune as an officer-in-training in the Skolian military. When her father forbids her to undertake such a dangerous path, a rupture develops as Soz chooses duty over family. Eube hopes to make this divide permanent, leaving the Empire ripe for conquest. And they're willing to kill anyone to make it happen.

What listeners say about Schism

Another great story in a wonderful universe, but I cringed every time I heard the "puh-sion", and in this universe that makes for a lot of cringes. Still, very worth the listen.

However well Catherine Asaro may write, something is to be desired in the performance done during this book by the narrator. Truly awful. The P is silent. Unfortunately the narrator does not seem to understand this theme among any of the words in this book. And in fact by not enunciating correctly she has ruined my experience throughout this entire book.

FIRST. I like the narrator but PLEASE say the word psion correctly! The "P" is silent. It is Sy-On NOT Pah-Sy-On." I found the mispronunciation really, really painful and distracting throughout the book. This is a story about Shannon, Soz, and more of the Ruby dynasty. Compelling series. I just bought the next one.

The world is interesting and the characters varied. Unfortunately the reader is awful. I found a Suzanne Weintraub who reads medical texts and narrates commercials. That explains her bland and robotic reading and the fact that she never makes an effort to distinguish between the different characters. There is no distinction between the narrative and dialog either. However that doesn’t explain her many mispronunciation including common words but the most egregious is sounding the p in psion (she pronounces psion posion). Surely she knows how to pronounce psychology? It wouldn't have been half as annoying if not for the hundreds of occurrences of the word. I particularly dislike narrators who are too lazy to find out how to properly pronounce words that they are unfamiliar with. I shudder to think her reading of medical texts which are bound to have even more unfamiliar words.

The editing of the audiobook isn't that great either. Narrator read a couple of sentences twice and it wasn't edited out. Bizarre.

These audiobooks would be so much more enjoyable if they are re-recorded with a different reader.

There are multiple instances of strange-to-painful word pronunciation in this audiobook. Very distracting and impossible to ignore. So bad that I am rethinking whether I want to listen to this series or not. :(

another great installment of the Skolian empire books, good enough that I finished it despite the fact that this audiobook has absolutely the worst narrator I've ever listened to on this service. I've seen multiple comments on how she pronounces every silent "p" in the book, but she also mispronounced or misspoke several other words. These include betrothal, behemoth, implacable, quasis, memorize/mesmerize, glands/glance, and many more. This almost ruined the experience for me, and I'm skipping the second half of this story because the narrator is so bad.