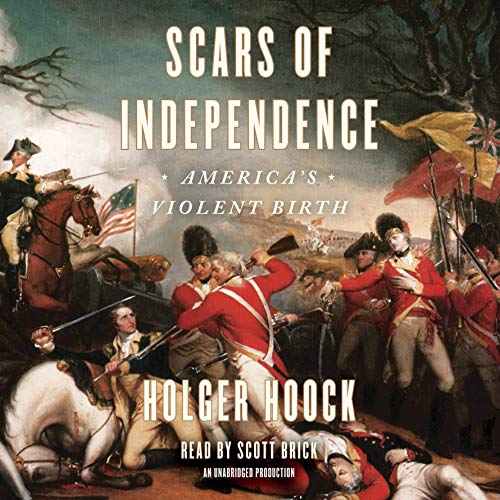 By: Holger Hoock
Narrated by: Scott Brick
Try for $0.00

A magisterial new work that rewrites the story of America's founding

The American Revolution is often portrayed as an orderly, restrained rebellion, with brave patriots defending their noble ideals against an oppressive empire. It's a stirring narrative, and one the founders did their best to encourage after the war. But as historian Holger Hoock shows in this deeply researched and elegantly written account of America’s founding, the Revolution was not only a high-minded battle over principles, but also a profoundly violent civil war—one that shaped the nation, and the British Empire, in ways we have only begun to understand.

In Scars of Independence, Hoock writes the violence back into the story of the Revolution. American Patriots persecuted and tortured Loyalists. British troops massacred enemy soldiers and raped colonial women. Prisoners were starved on disease-ridden ships and in subterranean cells. African-Americans fighting for or against independence suffered disproportionately, and Washington's army waged a genocidal campaign against the Iroquois. In vivid, authoritative prose, Hoock's new reckoning also examines the moral dilemmas posed by this all-pervasive violence, as the British found themselves torn between unlimited war and restraint toward fellow subjects, while the Patriots documented war crimes in an ingenious effort to unify the fledgling nation.

For two centuries we have whitewashed this history of the Revolution. Scars of Independence forces a more honest appraisal, revealing the inherent tensions between moral purpose and violent tendencies in America's past. In so doing, it offers a new origins story that is both relevant and necessary—an important reminder that forging a nation is rarely bloodless.

What listeners say about Scars of Independence

As an American and amateur history buff I greatly enjoyed the information contained within Holger’s book. I had heard or read bits and pieces of how violent our Revolutionary War had been. I think he was right on when he called this our first civil war. What I didn’t like was Holger’s implication that it was uniquely violent. William Tecumseh Sherman put it best when he said that “war is hell.”

One thing that did surprise me was how inhumanely the British prosecuted the war. For 50% of American causalities to have occurred as POWs is eye opening. I got the impression that the theme of Mel Gibson’s movie “Patriot” was entirely possible given what Holger reported.

I would suggest that Holger delete his epilogue with his pontifications, that added absolute nothing to his book. If anything it was a distraction.

The author, being German, is clearly an 18th century history expert. He masterfully portrays wrongs done by both Americans and Britons in this fantastic work. I would certainly recommend this book to anyone looking for a better understanding of the revolutionary war.

Interesting, but kind of depressing

It's interesting to hear of the perspective of both sides and the brutality inflicted upon both, but in totality, the sheer amount of the violence began to get rather depressing and somewhat boring. It was all I could do to continue to listen to the last 6 to 8 chapters. Maybe that's why this history has been whitewashed, to make it more tolerable to listen to.

Every American who thinks they have a clear grasp on American History and its first civil war should read and/or listen to this book and pass it to a family member.

Wow. Really made me think. For the first part of the book I was appalled by Americans brutality by both sides, and glad we became more civilized. But by the end, I kept comparing the angry over taxed mind set of gun hording conservatives against the actions of rioting protesting liberals wanting more taxation in exchange for government care. I realize now that we are right back to square one, and while police may not be able to do anything about burglars or vandals, they are the only thing keeping buckets of tar on the hardware store shelves.

This is a very immature,liberal understanding of what war is. He is likely never serve the country which given the availability to write what he writes.
A rebellion where the weak side is at disadvantaged has to terror methods. Vietnam, WWII esp. in France and China. Current East West battles through out the world. Maybe if the English government was more accommodating the USA would still be part of the English Empire. A lesson a current political party should learn.

polemic by a leftist German historian

Narrator was uninspiring in keeping with the author's selective negativity of patriot militia and Washington himself.
Don't bother reading. War is hell and the Revolution was war.

Engaging, Unusual Perspective on The Revolution

Holger Hoock, as a German "outsider," presents a highly-nuanced view of "America's First Civil War," as he terms it, that avoids the biased narratives that often accompany both American and British histories of the war. While you may not agree with all of his conclusions, his research is impeccable.

Fresh Perspective of the War

Excellent eye opening book about the American Revolution not found in most histories. Well researched.