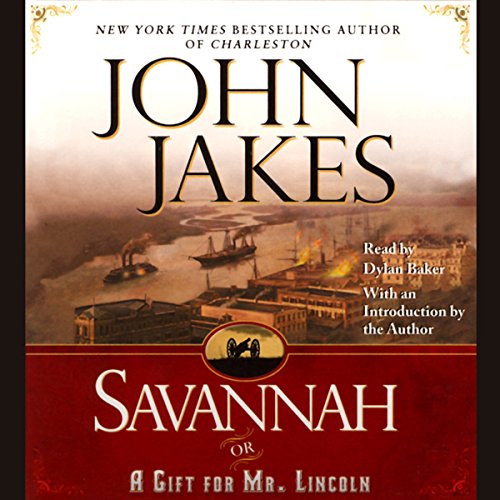 December 1864. The 60,000-strong army of General William Tecumseh Sherman has swept it's way through the south, burning Atlanta on its march to the sea. Next in line, the city of Savannah, which Sherman intends to capture as a Christmas present for Abraham Lincoln. When old "Uncle Billy", as Sherman is affectionately called by his troops, rolls into town, he meets his match in the form of 12-year-old Miss Hattie-Harriet Lester, a "damned little rebel" who tells it like she sees it. When Sherman's bummers come to loot the family rice plantation, she lets Sherman know it with a pointed kick to his shins.

Peopled with earnest lovers, a corrupt Southern judge, a pretty young widow, her plump spinster friend, a fast-talking New York reporter, a valiant young ex-slave, and other rascals, scalawags, fools, and real historical figures, Savannah: Or a Gift for Mr. Lincoln is a tale of Southern Civil War home life as the end draws near. It is both a morality tale and a comedy of manners, with the right mix of danger, romance and humor set against the backdrop of American history. This is John Jakes at his merry best.

What listeners say about Savannah

Story: good, though I am biased as a huge John Jakes fan. Performance: terrible! the reader is very flat, and half the characters sound like Squiward from Spongebob Squarepants.